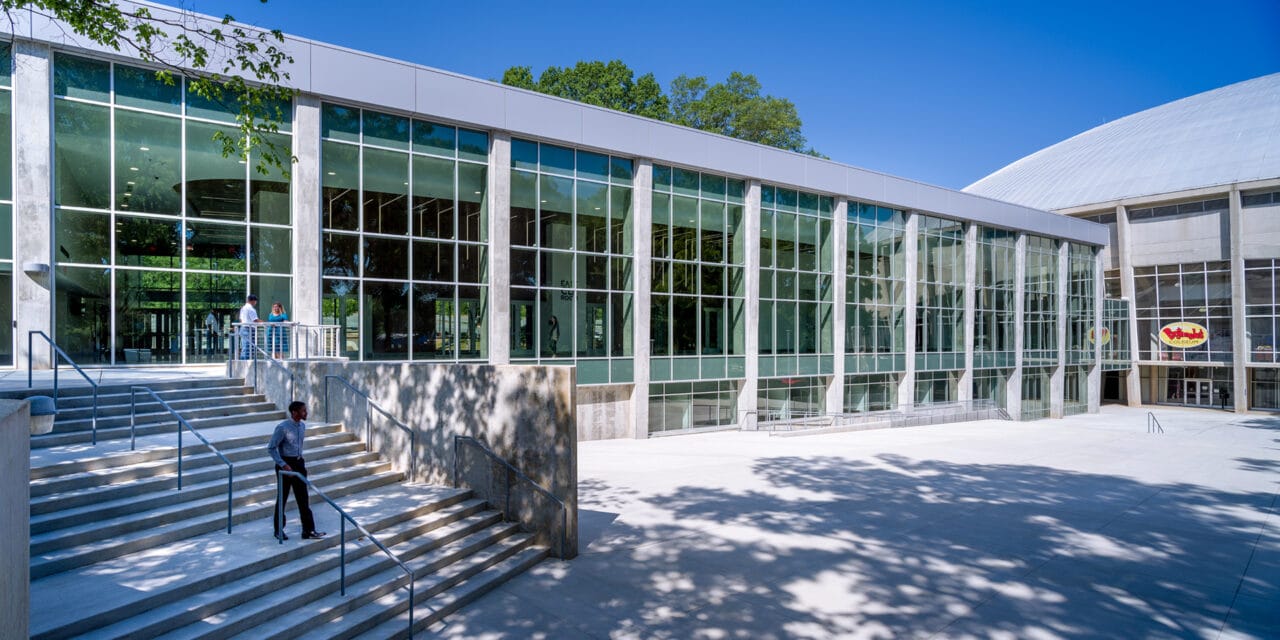 The $20 million addition, designed by Odell, a Charlotte design firm, spans 35,000 square feet. The project was completed in March 2020 but the addition never opened its doors to the public due to the pandemic.

The interior of the connector building brings a modern look and convenience to 8,600-seat Bojangles Coliseum and 2,447-seat Ovens Auditorium. The arena and performing arts center both opened in 1955 and sit next to each other along Independence Boulevard, a major thoroughfare running through the city.

But the two buildings were never connected by an indoor pedestrian walkway until now.

The addition was driven by patron feedback over the years about the lack of restrooms at both venues and circulation space in general at the two 66-year-old structures, said Zach Rutledge, the complex’s general manager.

Lack of hospitality space was also an issue, Rutledge said.

The connector building increases restroom facilities by 50% at the auditorium and by 33% at the arena.

“We don’t have the same footprint compared with newer buildings and when you have thousands of people in the venues, it can be difficult to navigate,” Rutledge said. “We now have meeting space, office space and more entrances for both venues, all of which connect the two into one complex essentially.”

The new restrooms will be open during events at both facilities. The portable concession carts, part of the in-house food and beverage department, will operate based on projected attendance, but should be open for several games, Rutledge said. 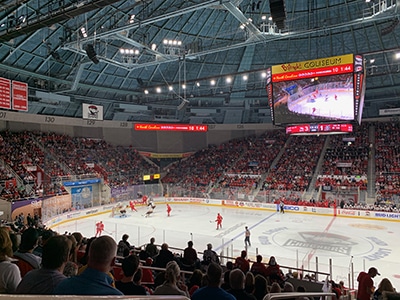 The Charlotte Checkers of the American Hockey League are the anchor tenant at Bojangles Coliseum. (Don Muret / Staff)

The Checkers, a member of the American Hockey League, relocated their administrative office to the connector building from uptown Charlotte, where they leased space at the Epicenter, a dining and entertainment complex which is now in foreclos

The team’s front-office move to the rebranded BoPlex, where they have played home games since moving back to Bojangles Coliseum for the 2015-16 season, is part of a fresh start for the Checkers. They took last season off due to the pandemic for multiple reasons.

The connector building includes the East CLT Room, a 4,400-square-foot banquet space. The Checkers have the ability to book that room for private parties and pregame hospitality for corporate partners and individual season-ticket holders, said Tera Black, the Checkers’ chief operating officer and alternative governor.

“A lot of how this addition came to fruition was the lack of hospitality space we had in our beautiful yet small concourses at Bojangles,” Black said. “It was built in a time when hospitality wasn’t top of mind. We literally filled up every space in that building when we could, but we needed more activation space for pregame catering and other types of events. We’ll use it as much as we can.”

Apart from the connector building, there’s a new Appetize point of sale system as both facilities go cashless. At the arena, mobile ordering is in place, starting with a limited number of orders taken at one time to ensure they can be fulfilled in a timely manner.

“That’s an industry lesson that people are happy to share and we’ve heard that message,” Rutledge said. “As we learn how to best make that process go, we’ll make some adjustments just like everyone else does.”

In addition, parking fees are now folded into the ticket price for events at both venues to help ease congestion in the parking lots and make it easier for people to get into the buildings, he said.

Future arena upgrades include a new roof exterior and HVAC improvements. Officials with the Charlotte Regional Visitors Authority, the venues’ governing body, are still working through the process to determine project cost and timing for construction, Rutledge said.

Bookings for both facilities have picked up substantially as North Carolina venues open back up at 100% capacity, although there is a mask requirement for indoor events as mandated by Mecklenburg County, Rutledge said.

The CRVA has developed new relationships with about five promoters, including Viva Entertainment, Loud and Live and The Messina Group, which brought Little Big Town to the auditorium for an Oct. 16 show.

Rutledge booked hot Hispanic act Grupo Firme direct for an Oct. 17 concert at the arena. It sold out in 36 hours.

Since that time, the Checkers have switched their NHL affiliation, now split between the Florida Panthers and the expansion Seattle Kraken. The Checkers were previously affiliated with the Carolina Hurricanes.

Black said it feels good to be back in business after taking last year off. Most of the team’s roughly 1,000 season-ticket holders held on to their accounts and rolled their money over to this season, she said.

CEENTA took over branding of one of the arena’s two Zambonis from Husqvarna. Novant Health sponsors the other Zamboni.

The Checkers would not disclose sponsorship revenue numbers.

The total value has gone down slightly from two years ago after a handful of smaller partners that lost business due to the pandemic did not renew their agreements, said Paul Branecky, the team’s vice president of marketing and communications.

“Given the circumstances, we’re very happy with where we are now and expect many of our previous partners to return as soon as they are able,” Branecky said.

All told, the Checkers reduced their full-time staff from 25 to 17, due in part to budget constraints after not playing last season, Black said.

“We made some adjustments and I’m sure we’ll add more staff as we move along in the year,” she said. “COVID is still here and so we’re not totally sure how it’s going to affect us. We’re being extraordinarily cautious, but everybody here has robust job descriptions, so to speak.”