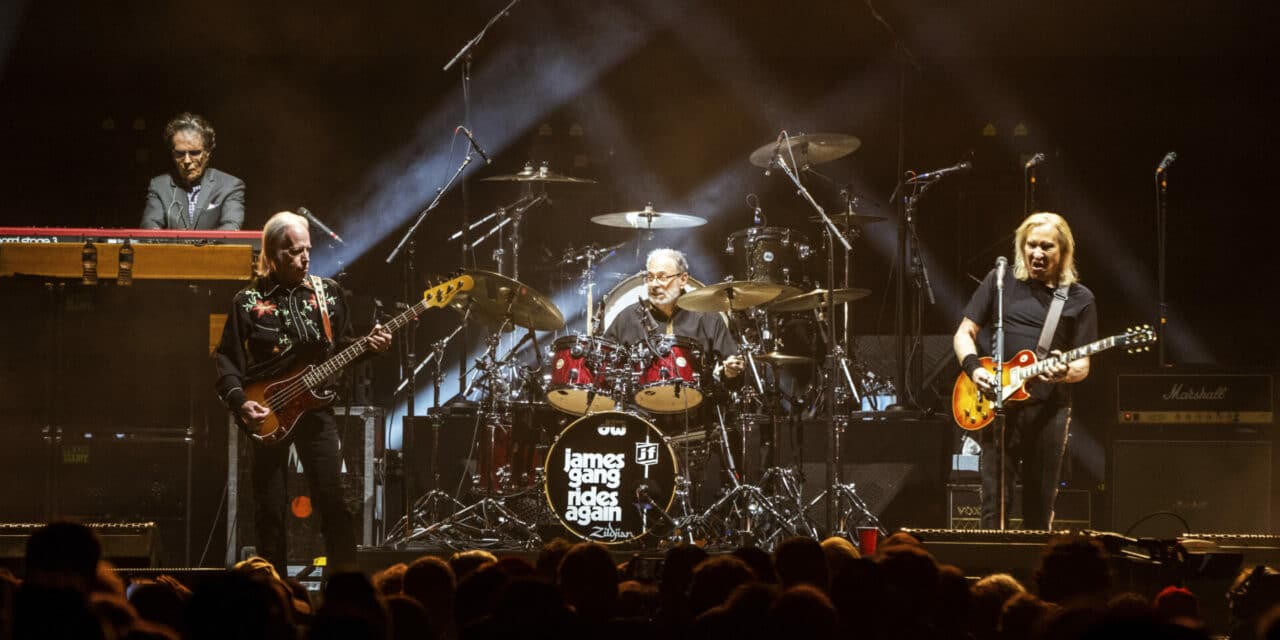 COLUMBUS, Ohio — VetsAid 2022 proved to be a love affair to the state of Ohio and an emotional homecoming for Joe Walsh, the driving force behind the effort to raise funds for military veterans in need.

Ticket sales surpassed $2 million, a record for the six-year event, said Christian Quilici, VetsAid producer and Joe Walsh’s stepson. The concert was a virtual sellout with the exception of some empty suites.

VetsAid merchandise sales topped $200,000, generating a $15.11 per cap, another record for the event, Quilici said. Two hours before the concert ended, the main merchandise stand was pretty well picked clean.

For those that missed out on buying T-shirts, hoodies, tote bags and posters, the online shop launched Monday, stocked with items.

All ticket and merchandise revenue goes toward the 15 veterans groups Joe Walsh handpicked as beneficiaries for VetsAid 2022. The same is true for the $20 fees collected from those watching the streaming production online.

Nationwide Arena officials declined to provide concessions sales figures, but much of the crowd skewed older, folks in their 50s, 60s and 70s, and they appeared to be a hungry, thirsty bunch. They took advantage of multiple set breaks over the six-hour event to roam the concourses for food and drink.

This year’s show also featured The Breeders, the Black Keys, Nine Inch Nails and special guest Dave Grohl, all of whom have family ties to the Buckeye State.

The heralded Ohio State University Marching Band kicked off the six-hour event with their take on “Hang On Sloopy,” the official rock song of Ohio, followed by the National Anthem.

Joe Walsh closed the show with a 20-minute set of his solo material. Grohl joined on drums for the “Rocky Mountain Way” finale.

Quilici filled in nicely as the host in replacing actor and Cleveland native Drew Carey, who came down with COVID-19 and couldn’t attend the concert.

For baby boomers, James Gang was the highlight, a rare treat for those that grew up with their music. The group hasn’t toured since 2006. They were scheduled to close VetsAid, according to the set itinerary but, instead, were second on stage behind The Breeders.

No biggie. The Gangsters pulled off an entertaining, tight set, interspersing hits such as “Walk Away” and “Funk #49” with deep cuts such as “Tend My Garden,” the epic “The Bomber: Closet Queen/Bolero/Cast Your Fate to the Wind” and the quick and quirky “Asshtonpark.” Grohl joined Fox drums in attacking “Funk #49.”

It was a joyous trip down memory lane for Walsh, who spent his formative years in Columbus after his father, an Air Force flight instructor, died in a plane crash in Okinawa in 1949, when Joe was a toddler.

His family moved to Columbus after his stepfather took a job at Nationwide Insurance. He bought his stepson a Sears Silvertone guitar when Joe was 10 years old, forging his path toward becoming a rock and roll hall of famer.

During his return to Columbus, Walsh got to see old friends and made appearances around town.  A portion of Nationwide Blvd., where the arena sits, was named Joe Walsh Way.

Prior to the concert, Walsh spoke about his support of veterans across the country and in his hometown.

“I was in a position to both thank the vets and be in the vet community. As a Gold Star kid, I discovered this wonderful (group),” he said. “In a way, having lost my father, I’m not alone after all these years. That’s why it’s special for me. I’m so grateful … because that’s America.”

In America, live music brings everybody together, regardless of their political beliefs, Walsh said, and that’s a key piece of the nonprofit foundation he founded six years ago to help veterans.

“I see now a divided country,” he said. “Going out on tour and playing for people that maybe would have trouble hanging out (together) — none of that matters at a concert,” he said. “Everybody has a good time and goes home the better for it … in this time of not agreeing on everything in this country. I hope it gets better.”