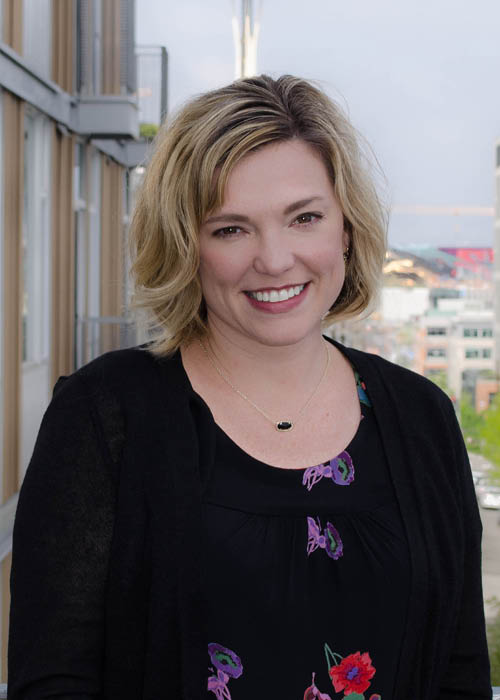 By Don Muret
Corissa Smith has gone from being the only woman in the room during construction meetings to mentoring women breaking into a traditionally male-dominated industry.

Smith, a vice president with AECOM Hunt in Phoenix, has been with the firm for close to 24 years. Over that time, she has worked on a combined 10 big league and college stadium projects and convention center renovations.

She grew up in Washington state and graduated from the University of Washington with an architecture degree in 1996. A friend got a job with the old Hunt Construction Group and Smith followed her down that path, getting an internship on the Major League Baseball project.

“It was an amazing opportunity,” Smith said. “The thinking was, if I’m ever going to be any good as an architect, I ought to know how to build a building, how it is all put together.”

The ballpark opened under its original name, Safeco Field, midway through the 1999 season.

At the end of that project, Hunt officials asked Smith whether she would be interested in moving to San Francisco to work on Pac Bell Park (now Oracle Park), which was halfway through construction. Smith jumped at the chance to work on another MLB project.

When the Giants’ ballpark was completed in 2000, she stayed in the city to work on Moscone Center’s west side expansion. She was responsible for the erection of 18,000 tons of structural steel at the convention center, a critical piece considering the Bay Area’s seismically active environment.

At that point, Smith was hooked on the construction aspect of facility development and on her way to becoming a key player for one of the nation’s biggest builders of public assembly facilities.

Hunt officials steered her to Phoenix, where she worked on the Arizona Cardinals’ NFL stadium. The 63,400-seat venue, now called State Farm Stadium, opened in 2006 in the suburb of Glendale. It stood out for its cutting-edge design and the construction process.

Smith was in charge of the roof and the field. Both were retractable components and innovative in U.S. sports.

“The way that we built and lifted the roof was kind of the predecessor for SoFi Stadium in the way the roof trusses were erected,” she said. “Back then, it was the biggest roof lift in North American history, 5,400 tons at one time.”

She said, “The retractable field had never been done before in the U.S. The retractable roof is more like a moon roof on a car, the first to operate on an inclined slope. It travels up and down rather than sideways. It was a transformative project for me from a career perspective.”

For about eight years, Smith worked on more convention center expansions in Phoenix, San Antonio, San Jose and Seattle. Along the way, she worked her way up from project manager to director of pre-construction and client services before being promoted to vice president in 2016.

Still, as someone who came from the architecture world to the “dark side” of development, as Smith says with a laugh, she always felt like she had to play catch-up with construction knowledge and expertise. Plus, being a woman in construction didn’t make things any easier for her.

“It took me a while to figure out that no matter how hard I tried, I was never going to know it all,” she said.

“Initially, I let anything that happened kind of roll off my back in terms of lack of tolerance. I had to work my way into earning everybody’s respect, and that’s what I did. For better or worse, I was just trying to blend in with the team and figure out how to do my job.”

Further into her career, Smith realized that diversity was something that should be celebrated and honored for bringing people from different backgrounds to the construction site, regardless of gender or ethnicity.

At that point, Smith began to champion the role of women in construction and serve as a mentor to others in the field.

“There were never really a lot of women around me or above me in positions to look up to,” she said. “My mentors were mostly men. I realized there was a big gap and felt I had something to share.”

Smith got involved in the Women in Construction conference, an annual event that rotates between Arizona and California. For the event, she organizes separate activities for a group of female AECOM Hunt employees from across the country to socialize, have dinner and just get to know each other.

“It all started when somebody called me to be on a panel,” Smith said. “I thought why? Then I went to one event and figured out it was important, not just for women to go but for men to attend because they can learn a heck of a lot.”

For Smith, it’s evolved into an entire curriculum for Hunt officials built around the conference. In addition, she’s involved in speaking engagements with students at Northern Arizona University in Flagstaff.

“That’s a way to get in front of other people and attack my fear of public speaking, which paralyzed me for a long time,” she said. “I’m starting to get more of my colleagues front and center in college and recruiting settings.”