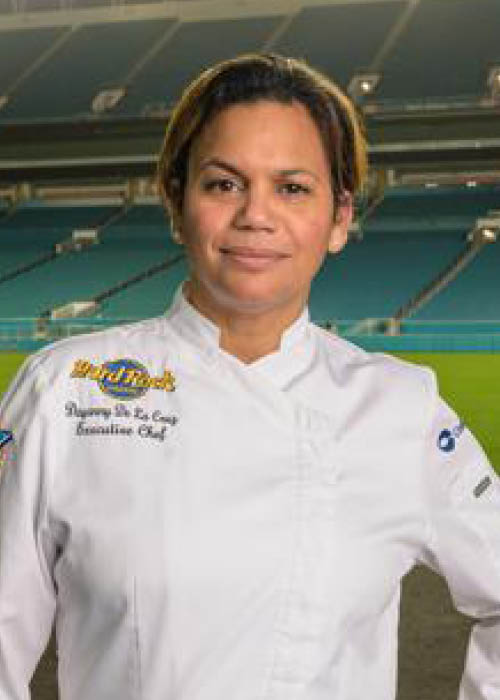 By Sarah Pittman
It’s usually fans who are asking Beyoncé for a photo, but when the diva attended Super Bowl LIV this year at Hard Rock Stadium in Miami Gardens, Fla., she was the one asking executive chef Dayanny De la Cruz to pose for a pic. De la Cruz is certainly a star in her own right, having made history as the first female head chef at the Super Bowl.

De la Cruz, who was born in the Dominican Republic, has worked as a chef for 18 years and has been at the NFL Miami Dolphins’ stadium for the last three seasons. (Concessionaire Centerplate has provided hospitality services at the venue since 2001.) At the Super Bowl in February, she led a team of 250 chefs and 2,500 culinary employees responsible for food at 55 concession outlets, 167 suites and seven all-inclusive clubs at the stadium, as well as F&B for both teams’ players and staff.

Although De la Cruz says she’s “extremely honored to be the first female chef and carry that torch,” she noted that it’s “crazy in 2020 we’re still talking about firsts.”

Looking forward to the day that it’s normal for women to be in executive positions, she added, “I think we should be celebrating (Super Bowl LIV’s zero-waste efforts), no plastic, helping the environment, cutting our carbon footprint, serving local. We should be celebrating the great things we’re doing for the community.” The event’s sustainability efforts included donating or composting leftover food.

Another highlight for De la Cruz was making meals for those in need through the Miami Dolphins Foundation while the stadium was closed to the public.

“We love to (put on events) for football and soccer, but the five, six months has been one of the most rewarding for all of us. As chefs, we were able to bring some of our people back to work, which was one of the most amazing moments for me to be able to just make that phone call. … We actually made a million meals out of this building. … Kids and elderly got meals delivered to their home or school.”