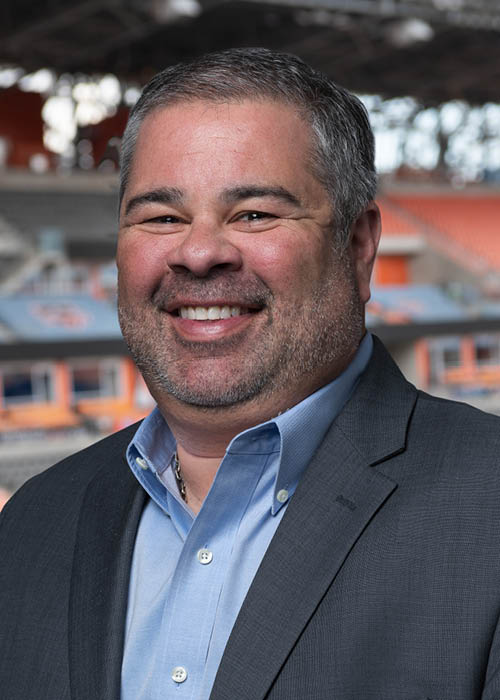 For Rodriguez, executive vice president and general manager of BBVA Stadium, his goal was to work for Wayne Huizenga. In the late 1980s and early 1990s, Huizenga built a sports empire in South Florida as owner of the NFL Miami Dolphins, MLB Florida Marlins and the NBA Miami Heat.

In 1993, while still in college, the Miami Hooters of the Arena Football League hired him as an intern. They played at old Miami Arena, which was managed by LMI, a company co-owned by Huizenga and facility management executive Mike McGee.

It was the first of a dozen sports venues in which Rodriguez served on the front end of development and operations. Along the way, he was mentored by McGee, Russ Simons, Mark Miller and Michael Marion, all of whom worked for LMI or SMG, which acquired LMI in 2000.

Rodriguez was principally involved in opening three projects, starting with Reliant Park (now NRG Park), and the Houston Texans’ NFL stadium. He spent 14 years there before heading to California to open Golden 1 Center for the NBA Sacramento Kings. It opened in 2016.

Three years ago, Rodriguez moved his family back to Houston after he got the job running BBVA Stadium, which opened in 2012 for the MLS Dynamo. After a few lean years on the pitch, the Dynamo found success again, bringing back the fans’ energy and passion, he said.

“Unfortunately with COVID, it puts a little damper in it, like everybody else,” Rodriguez said.

In September, the Dynamo joined a handful of other MLS teams welcoming fans back to their stadiums under local restrictions for reduced capacity. It’s a start to getting back to normal.

“Here we are, getting excited about having 3,000 people in the building when we didn’t have any,” he said.

The pandemic has put life in perspective for Rodriguez.

“I’ve learned how to be a better person,” he said. “Sometimes, we as operators just look at that next event and don’t always realize what we have in front of us. During the last six months I’ve spent more time with my kids than I ever had. It’s been eye opening for me.”