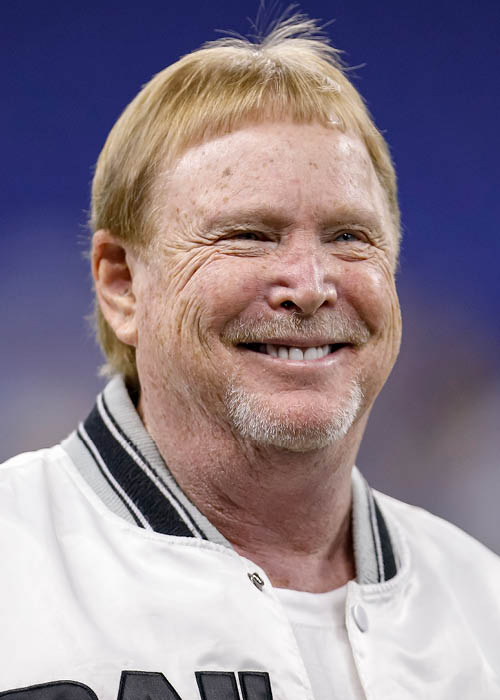 By Don Muret
Mark Davis’ legacy will forever be tied to Allegiant Stadium, the shiny new NFL venue on the Vegas Strip.

The $2 billion facility is home to the Las Vegas Raiders, whom Davis owns. The Raiders have their own home after spending the past 60 years as a secondary tenant at stadiums in San Francisco, Oakland and Los Angeles.

The team’s journey to build a new venue spanned 20 to 30 years, depending on the source. The search covered multiple attempts to build new stadiums in California and a potential move to San Antonio’s Alamodome.

“The vision for Mark was always to build a Raiders stadium, something emblematic of the brand and something built for football,” said team President Marc Badain. “We’re one of the last NFL teams to get a new building. We were overdue.”

Davis took over the Raiders after his father, Al Davis, founder of the team that began play in the old American Football League, died in 2011.

Mark Davis’ role with the team started on the retail side, developing the Raider Image brand, which now extends to Allegiant Stadium’s team store. The 18,500-square-foot retail space is among the only areas of the stadium open to the public during the pandemic.

Davis’ input on stadium development extended from his commitment to playing games on a natural grass field, the surface they have played home games on since their inception in 1960, to the Al Davis Memorial Torch in the south end, which pays homage to his father.

Allegiant Stadium has a fixed roof, which drove the Raiders’ decision to go with a grass tray system that rolls out of the building on non-game days to catch sunlight as part of maintaining the field surface.

They considered an operable roof with a grass field remaining intact and supported by a grow light system. Further research, though, showed it would be a challenge to grow grass indoors in the desert climate.

“It’s something Mark wasn’t willing to compromise on,” Badain said.

The same commitment holds true during the pandemic, which resulted in the shutdown of sports venues.

In early August, Davis made the decision that no fans would attend Raiders games for the 2020 season, regardless of local guidelines allowing for reduced capacity in the 65,000-seat stadium. Davis didn’t think it would be fair to allow some parts of the fan base to attend games while others are shut out this year.

“Mark Davis said if all the fans can’t come, nobody can come,” said Lanson Nichols, an architect with HNTB who’s worked with the team to build a new stadium since 1992. “He said, ‘I’m not going either,’ and he’s honored that. He’s not watching (home) games at the stadium.”

More than three years after the Raiders and public officials signed a deal to build Allegiant Stadium, the team has embedded itself in the Las Vegas market and the community has embraced them, Nichols said.

“It’s a fresh start of sorts for the Raiders organization,” he said.