The shiny new Allegiant Stadium just south of the Las Vegas strip hosted its first NFL game for the Las Vegas Raiders in September 2020. But the shine on the new venue hadn’t worn off by the time it first welcomed fans inside the venue in August 2021.

“Having extra time to plan and learn the building systems was invaluable for the operations team,” said Chris Wright, the stadium’s general manager, “as the intricacies of our conversion process and timelines were tested, challenged and continually improved.”

Wright , part of ASM Global’s operations team in Vegas, said the extra time allowed staff to beta test content and branding strategies in anticipation of a full opening. “These constituted investments of energy and labor,” he said, “but they have paid off considerably.”

The expectation level from local fans surrounding the opening of the $1.9 billion stadium was high in 2020. It only grew as the pandemic kept fans out of the building until 2021. Along with fan anticipation, the commitment of the team for the highest-quality guest experience and the fact the venue was opening “in the entertainment capital of the world where ‘Only Vegas’ experiences are the norm, and you can quickly see that the bar was always going to be high,” Wright said. “So far, we’ve met or exceeded our goals and will continually invest to move the bar higher.”

The Allegiant Stadium experience is about more than just the NFL. The venue’s show counts and grosses have been tour and event highs, Wright said, and he credits the team’s ability to market non-NFL events to Raider Nation as a key driver in sales success.

“We really feel that this is still our first year of operation and there are many opportunities to explore,” Wright said. “We are already looking at new options for seating, and our food and beverage programs continue to capitalize on the world-class chefs and restaurants here in Vegas. We are so thrilled by the response from our guests and clients to the stadium’s opening to fans, but we know that to stay on top, we have to continually raise the bar and exceed their expectations of what a stadium experience can be.” 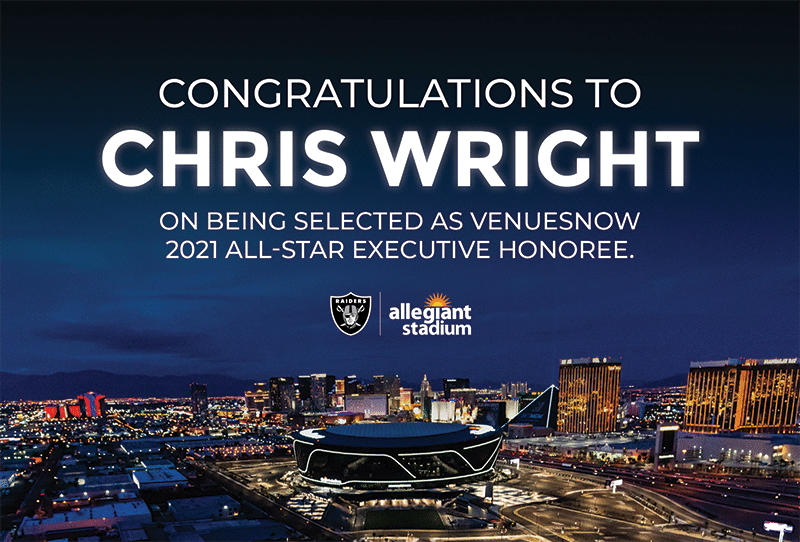