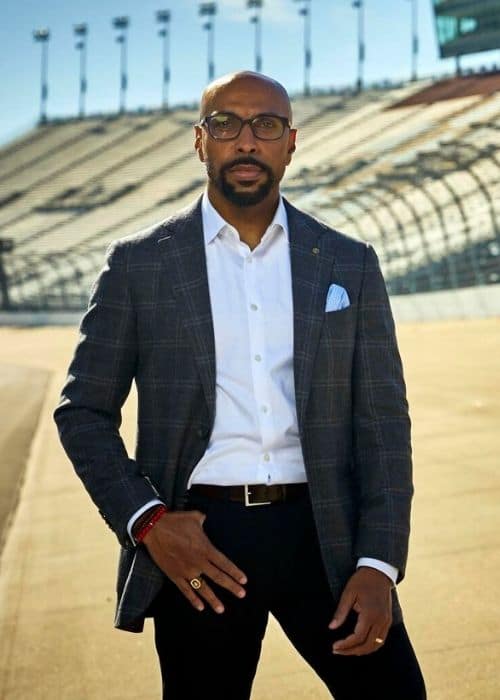 Staging the Ally 400 NASCAR Cup Series race on Father’s Day 2021 at Nashville Superspeedway took a Herculean effort, said Erik Moses, president of the venue. The track had shut down in 2011, lying dormant for a decade, and the venue’s team had less than one year to prepare for the event — all while contending with a global pandemic. The stakes were high for the region, too. Middle Tennessee had not hosted a top-level NASCAR event since 1984.
Moses and his team were up to the task, hosting a sold-out race that drew raves.

“All throughout the weekend we heard overwhelming praise from not only industry leaders, drivers and NASCAR team members but fans as well who were excited and energized about America’s best drivers returning to Middle Tennessee for the first time in almost 40 years,” Moses said.

Moses said the event required contributions from the entire team at Dover Motorsports (which owns Nashville Superspeedway and its sister track, the Dover International Speedway in Delaware) and dozens of partners, including NASCAR, NBC and three race title sponsors – Ally Financial, the Tennessee Lottery and Rackley Roofing.

“We can’t underestimate the critical support from NASCAR, which helped to ignite the momentum for our sport in this market by hosting its Champions Week activities in Nashville in 2019, demonstrating how important a market Middle Tennessee is for the future growth of the sport,” Moses said.

Moses said it was rewarding to provide the region’s die-hard fans with the racing action and overall experience that they craved. He said he attributes most of the success of this year’s race to those fans.

“These fans are passionate about their culture and their favorite sports, including auto racing,” Moses said. “It is a natural fit to hold NASCAR in this area of the country, and our team considered it a privilege and honor to bring NASCAR Cup Series racing back to this market after so many years.”

Moses said his training as a lawyer proved beneficial to tackling the challenge of rejuvenating a brand and resurrecting a venue, equipping with him an attention to detail and problem-solving and contingency-planning skills. A self-described strategic thinker and extrovert, Moses said he likes to build meaningful relationships with his team, its partners and stakeholders, and in the community.

In that vein, Nashville Superspeedway received the Track Award at NASCAR’s 2021 Drive for Diversity Awards in its first year back in action. The honor recognized the venue team’s efforts to support diversity and inclusion and to reach new audiences for motorsports in the region. Efforts that led to the honor included hosting more than 120 alumni and guests from Tennessee State University, a historically black college, and about 30 students from the Knowledge Is Power Program of Nashville, a free, open-enrollment college preparatory school for low-income students, during race weekend. Among their activities, the KIPP students participated in a Q&A with NASCAR driver Bubba Wallace and attended a news conference for musician and NASCAR team owner Pitbull.

“Building our fanbase and expanding our cultural footprint is not only a goal for NASCAR as an industry but for our track as well,” Moses said. “As we continue to build upon the foundation of our inaugural NASCAR Cup Series weekend, Nashville Superspeedway looks forward to working with more community groups and welcoming new fans to the sport and our campus.”

Looking ahead, Moses said his team plans to make Nashville Superspeedway “a vibrant entertainment venue for festivals, concerts, car shows, holiday events and other family-friendly offerings.” In October, the venue and ASM Global announced a partnership to bring an assortment of live entertainment events to the superspeedway. Moses hopes to develop new signature events for the venue that will diversify its offerings and the audience it reaches.

“The enthusiastic response to our inaugural NASCAR Cup Series weekend and the support we’ve seen for the other events hosted here in the last year has strengthened our confidence in our ability to attract and host top-quality sports and entertainment events,” Moses said.

Regarding the track’s new headline event, preparations are already underway for NASCAR’s return engagement in Nashville in June.
“While we were excited to host a sold-out crowd for the Ally 400 NASCAR Cup Series race on Father’s Day this year, we are looking forward to enhancing the fan experience outside the grandstands as we hopefully are able to put the COVID-19 pandemic in the rear-view mirror,” Moses said. 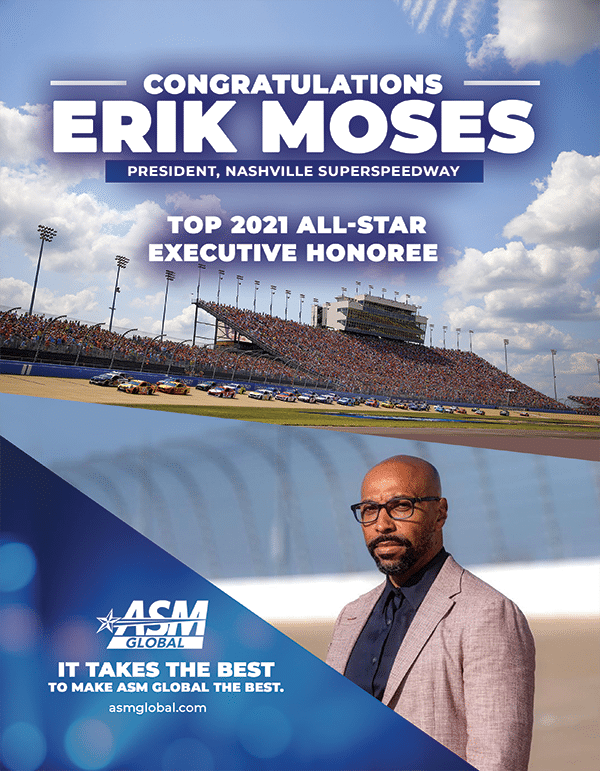