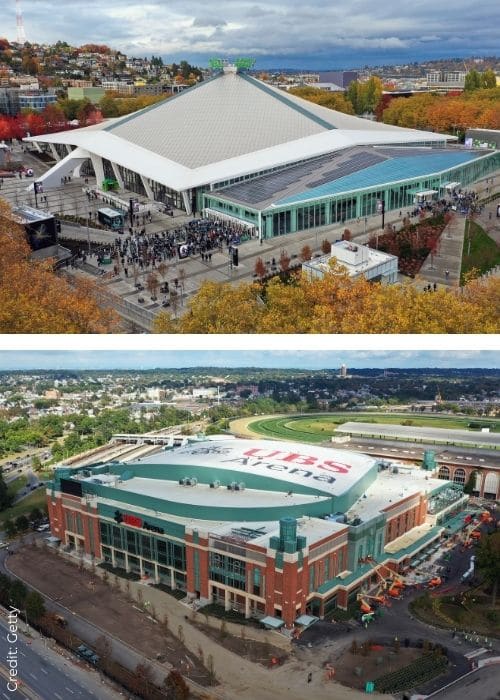 Since Gary Bettman became commissioner of the NHL on Feb. 1, 1993, every team in the league has opened a new arena except the New York Rangers, whose Madison Square Garden got a billion-dollar renovation eight years ago, and the Calgary Flames, who plan to move to a new building in 2024.

That’s an entire generation of arenas that has been built under Bettman’s watch. Though construction in the league cooled off in the first half of the last decade, it has heated back up again with a group of buildings that has reset the bar for hockey barns.

Leading the list are the 2021-22 season debuts: Climate Pledge Arena, which opened in October as the home of the expansion Seattle Kraken, and UBS Arena (see cover story, Page 65), which hosts its first New York Islanders game on Nov. 20. (Both buildings were developed by Oak View Group, which also owns VenuesNow.)
Bettman praised the company, which created a blueprint for venue sustainability in Seattle and got a new arena built in New York City, neither of them easy assignments and made all the more challenging by the overlapping construction schedules during a pandemic.

“While already a leader in the field, the Oak View Group has yet again redefined ‘State of the Art,’” said Bettman in an emailed statement. “Somehow, both in Seattle and on Long Island, with arenas that opened within five weeks of one another, they have achieved yet another level of excellence.”

They follow three other recent builds in the league. Little Caesars Arena opened in 2017, designed as a new catalyst for growth in Detroit’s urban core. A year before, Rogers Place quickly became a critical favorite for its design and its function as an anchor for downtown Edmonton, Alberta’s Ice District. In Las Vegas, T-Mobile Arena emerged in 2015 from a long effort to build an arena by AEG, which paired with MGM Resorts International on the project, and became a high-profile addition to the league known for enthusiastic fans and dazzling pregame productions befitting The Strip.

Speaking on the Class of 2021, Bettman said, “Not only is Climate Pledge Arena an engineering marvel, it serves Kraken fans as a completely new standard for venue sustainability in the heart of Seattle. And, UBS Arena has somehow managed to incorporate the intimacy of the Islanders’ long-time former home into a spectacular new, next-generation venue that will immediately make a mark in a market that already is home to some of the world’s most renowned arenas and stadiums.”