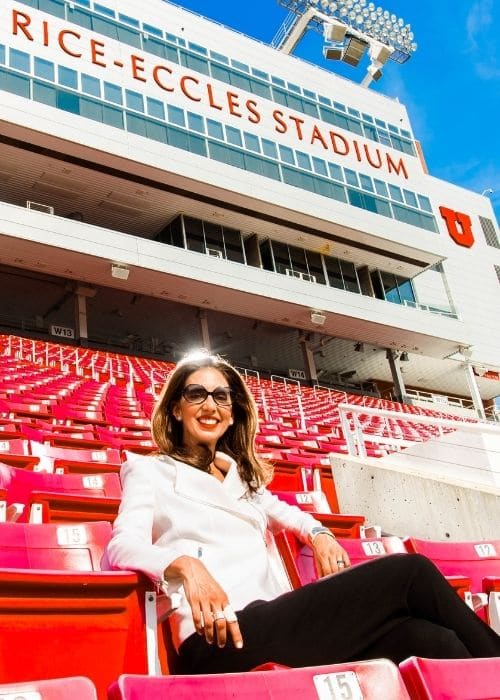 Molly Mazzolini created Infinite Scale, a sport design consultancy in Salt Lake City, with partners Amy Lukas and Cameron Smith 19 years ago after the three met at the 2002 Olympics. As an ambassador and champion of her team, clients and projects, Mazzolini has helped grow the brand integration service company, which has worked with more than 130 global venues. Infinite Scale was acquired by Elevate Sport Ventures this past August.

Seen as resourceful, adaptable and observant, she often provides advice about careers to mentees.

“We work in a 24/7 industry that is seen by outsiders as glamorous, but those on the inside know it’s hard, grinding work so we stick together as family — support and sponsor each other for the love of sport and design,” she said.

Mazzolini and Infinite Scale did not miss a beat after COVID-19 hit. In 2020, the company played a significant role in the creative strategy, design and implementation of several sports industry events, notably staffing event team members inside the NHL Stanley Cup “bubble” in Edmonton and Toronto, Canada.

The company and Mazzolini have been busy in other areas, as well. In collaboration with Oak View Group, Infinite Scale worked with the Kraken Community Iceplex, bringing brand integration from corporate partners to the new team brand identity as well as designing wayfinding signage. In addition, Infinite Scale partnered with Seattle Kraken CEO Tod Leiweke and his brother Tim, co-founder and CEO of OVG, Climate Pledge Arena’s developer, to create the idea of the Environmental Hall of Fame as well as a 200-foot Living Wall.

Also recently, Infinite Scale created the Caesars Superdome logo in collaboration with the NFL’s New Orleans Saints and Caesars Entertainment and is part of the Superdome’s $450 million renovation through 2024.

In late October, Infinite Scale worked with Salt Lake City’s Olympic & Paralympic Cauldron Plaza at the University of Utah’s Rice-Eccles Stadium to design an outdoor museum experience. The new plaza commemorates the Salt Lake 2002 Games and looks ahead, as Salt Lake City is a 2030 U.S. candidate for the Winter Games.