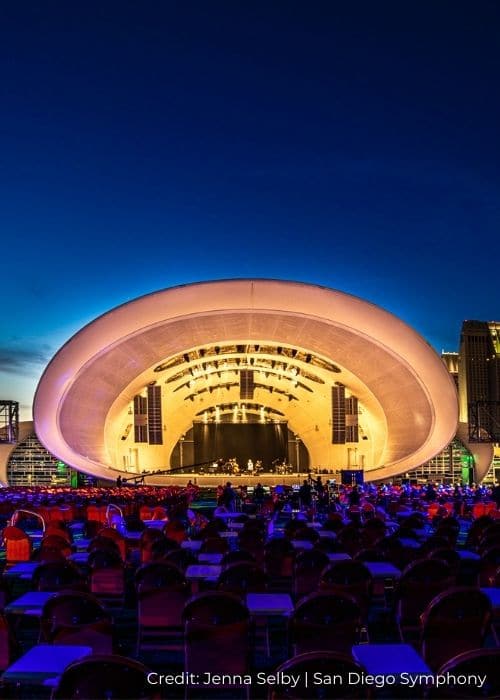 You expect to find some shells near the ocean, but nothing like this.
The Rady Shell at Jacobs Park, which opened in August as the outdoor home of the San Diego Symphony, is an $85 million venue that combines design, acoustics and amazing views of the city and San Diego Bay into a unique experience for concertgoers.

Tucker Sadler Architects of San Diego, led by CEO and principal Greg Mueller, is the architect of record for the venue, which was developed through a collaboration among the symphony and a number of design and construction experts. In addition to the striking shell, the venue includes backstage artist spaces, underground restrooms, kitchens for food prep for a culinary program curated by Sodexo Live, and a sloped seating area. Rather than permanent seats, the venue uses portable padded seating from Spec Seats that can adjust for capacities of 2,000 to 10,000.

Soundforms and its London-based partners designed the shell itself working with Tucker Sadler, and Meyer Sound and L-Acoustics contributed to an overall acoustics plan that brings the sound of a concert hall to the bayside location.

The Rady Shell takes its place among San Diego’s other major venues in the city’s Gaslamp Quarter, steps from the San Diego Convention Center and across the street from Petco Park.