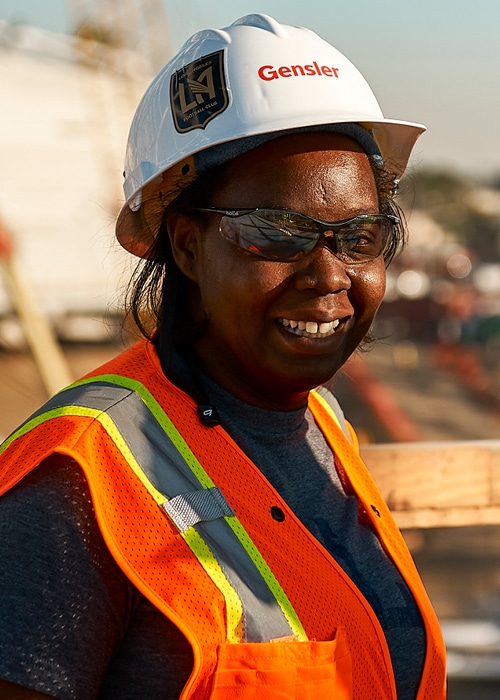 Demetra Thornton went straight to the big leagues after college, which isn’t the typical path for a designer of venues at the highest level of sports. As a “rookie” architect, Thornton was part of the Populous team to design Nationals Park and Kauffman Stadium upgrades.

“They threw me in the deep end,” said Thornton. “It was a great experience and I learned a lot. I cut my teeth there.”

Fifteen years later, Thornton is entrenched at Gensler, where she serves as the firm’s senior associate and studio director and a catalyst for its social justice initiatives. She joined Gensler in 2011 at the time it started its sports practice.

It was a big leap for Thornton to relocate so she could work at the firm’s Los Angeles headquarters after spending five years at Populous, which was already established as one of the biggest sports design groups.

“I was hungry to do something new,” she said. “For me, it was a good opportunity to leave Kansas City and kind of spread my wings a bit and diversify. As much as I loved my time at Populous, I enjoyed the idea of being immersed with a firm that did things other than sports. I was ready to make it my own and put my stamp on it.”

Over the past decade, she has helped Gensler grow into one of North America’s top sports architects. Along the way, her work has touched the firm’s retail and hospitality groups, plus mixed use, a key component of many sports developments over the past 20 years.

Her current projects include San Diego State University’s new 35,000-seat stadium, part of a strategic expansion of the school’s campus, and proposed renovations to Nissan Stadium, home of the NFL’s Tennessee Titans.

Thornton started at Gensler designing a refresh to both Lincoln Financial Field and FirstEnergy Stadium, two NFL venues. Then she worked on The Star, the Dallas Cowboys’ headquarters and practice facility tied to a large mixed-use development in Frisco, Texas.

From there, she turned her attention to Banc of California Stadium, LAFC’s $350 million facility and the crown jewel of Major League Soccer. The 22,000-capacity facility opened in 2019 next to Los Angeles Memorial Coliseum. Thornton filled the role of lead designer.

For Gensler, it was among the first new sports venues it designed from the ground up, Thornton said.

“I was on that project from beginning to end,” she said. “It transformed MLS and how people see these facilities in terms of hospitality and finish level. It was monumental for us and for me personally to lead the charge there.”

In the middle of designing Banc of California Stadium, Thornton spent two years getting a master’s degree in business administration at UCLA’s prestigious Anderson School of Management.

It’s not easy to get accepted at the Anderson School, said Ron Turner, a principal and director of Gensler’s sports practice. It’s ranked among the top postgraduate institutions in the country. Thornton completed the program in 2016.

“It’s hard enough to do these sports projects,” he said. “For her to also be doing her MBA at Anderson and graduate at the top of her class is amazing. She’s on a trajectory, and there’s no stopping her because of her intelligence, drive and passion.”

Early in her career, Thornton relied on multiple female designers for guidance.

“All of them have given me insight to what it’s like in architecture and the overlay of sports,” Thornton said. “A lot of our clients now are women, so there’s additional interaction. The industry is changing a lot with women making their mark and being strong and resilient.”

With close to 20 years of experience as a sports designer, Thornton now finds herself serving as a mentor to other women in the field. She also plays a key role developing Gensler’s Racial and Diversity Initiative, a new social justice program to recruit people of color from historically black universities and colleges and to steer them toward careers in design.

In addition, Thornton and Audrey Handelman, her Gensler colleague, are both members of the city’s Racial Equity and Newly Empowered Workplaces Task Force. It was formed last fall by Los Angeles Mayor Eric Garcetti. Similar to the Gensler program, the mission of RENEW is to advance racial equity in the workforce.

“She takes on a lot of things, and it never seems to change her focus on the project at hand,” Turner said. “Our clients love her.”

It started at home in Cincinnati, Thornton said. Her mother provided a strong influence. Her father is a building contractor.

She loves sports and played softball as an outfielder at Hampton University in Virginia. “I’ve always been passionate about those two things, building and sports,” Thornton said. “My favorite time is Opening Day when everybody is able to enjoy the facility, not just you. Right now (during the pandemic), it’s easy to watch anything on your TV. But it’s all about building this incredible experience you can’t get at home.”