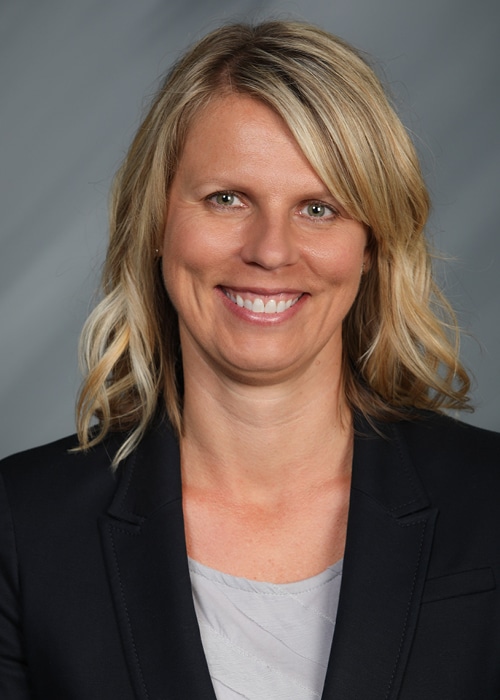 “The Championship Weekend had been essentially sold out for weeks before the pandemic hit in March,” said Giese, the raceway’s president.

“There were many fans who purchased tickets to the first NASCAR Championship at Phoenix Raceway who would no longer be able to attend,” she said, though season ticket holders were given priority as part of the process.

Phoenix Raceway and NASCAR officials created a thorough plan that allowed them to safely fill about 20% of the racetrack all three days of the event. The NASCAR Championship Weekend was a success, and Giese calls it one of her most important accomplishments in 2020.

She’s equally proud of what NASCAR was able to accomplish, returning to live competition after an eight-week hiatus. “It was among the first leagues to complete a full season as well as the only professional sport to complete the same number of events as originally scheduled in 2020,” she said.

As she prepared before NASCAR’s return to the track March 12-14, Giese and Phoenix Raceway were soaking in the positive buzz and energy surrounding NASCAR. She called the 2021 schedule the “most dynamic” in more than 50 years.

“We’re seeing that momentum continue to grow,” she said. “Our on-track action is as competitive as ever and features, arguably, the most talented crop of drivers, highlighted by accomplished veterans such as Kyle Busch, Kevin Harvick and Joey Logano, as well as young stars already making their marks with playoff and championship success like Chase Elliott, Bubba Wallace, Alex Bowman and Ryan Blaney.”

Officials acknowledged last summer that the sport needed to elevate the importance of diversity and inclusion. Thanks to NASCAR’s reinforced commitment, new audiences and owners, such as basketball legend Michael Jordan and entertainer Pitbull, have come into the fold.

NASCAR required sensitivity training and strengthened partnerships with the Ross Initiative in Sports for Equality and the Institute for Sport and Social Justice.

“The process started with listening,” she added. “What followed was the decision to ban the confederate flag, a landmark moment in our history and message to all that NASCAR is welcoming and inclusive of everyone that shares our passion for racing.

“Internally, we formed diversity councils across both senior leadership and employees at large and elevated Brandon Thompson to the position of vice president of diversity and inclusion.”

Also, during the year of hardship, NASCAR tried to make the lives of others a little easier. Once the effects of COVID-19 were understood, Phoenix Raceway considered ways it could support the Phoenix Metro area. In May, it was the first of many tracks across the country to host high school graduation events.

In the fall, the track hosted a charity fundraising event during which fans could drive their vehicles on the track for a charitable donation. Phoenix Raceway, in conjunction with the NASCAR Foundation, donated stuffed “Speedy Bears” to brighten the days of patients at Phoenix Children’s Hospital.

As the holiday season approached, Phoenix Raceway engaged with the community by hosting a drive-in holiday drone light show with Walmart. And to cap off the season, Arizona Accelerator Charities announced $40,000 in charitable donations to four Arizona organizations: including the 100 Club of Arizona, Phoenix Children’s Hospital, Teach for America-Phoenix and Veteran Tickets Foundation.

The bright lights of the holiday drone event were not the only things illuminating Giese’s year.

“The way our Phoenix Raceway team, along with our entire industry, responded to the challenges faced last year really helped me stay positive and focused throughout the year,” says Giese, who hopes to scratch off her bucket list a trip to the Ryder Cup when it’s safe.

“Our team pushed through all the adversity and challenges presented to us to plan and host a successful NASCAR Championship Weekend, and their excitement for the event never wavered. Seeing how quickly our sport was able to pivot last March to create the virtual iRacing events featuring our drivers, to being the first major sport to return to competition, and to then being among the first to welcome fans back to our venue, was truly inspiring.”