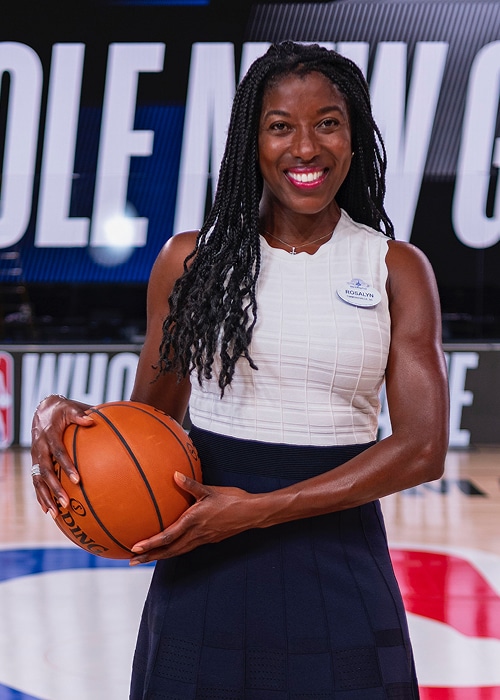 Queen and Her Kingdom

Fresh on the job at Disney World,
Rosalyn Durant helped give the NBA and MLS
a place to play

Rosalyn Durant is a superhero, masquerading as a Disney executive — or quite possibly Disney princess, who played a significant role in negotiating ESPN’s eight-year contract extension with the NBA in 2007. Prior to that, she served as SVP of ESPNU, SEC Network, Longhorn Network and helped launch the ACC Network.

Two days into her history-making hire as the first Black woman to be SVP of Walt Disney World Operations overseeing Disney Springs, ESPN Wide World of Sports, and Disney’s Blizzard Beach and Typhoon Lagoon Water Parks, the World Health Organization declared a global pandemic due to COVID-19. As someone who seemingly has no fear of the impossible, there wasn’t a better person for the job.

The broadcast journalism major/marketing minor from the University of South Carolina stepped up and did what she does best: consider the challenges, lean into her teams and her relationships, listen and ask “What needs to happen?” With no template, she and her team aligned with the NBA and Major League Soccer (MLS) to help see the two organizations finish their seasons – navigating all of the unknowns in two months!

“Really, it started more as a friend talking to a friend about what was going on in the world, what was going to happen and what needed to happen,” Durant demurs. “I was brand new at Disney, but had all these relationships from my time at ESPN. So, we knew each other and trusted each other — and we decided we could figure it out.

“Everyone was just trying to understand the scope of what was going to be required to bring sports back to everyone. But it felt like the nation really needed something to give them a sense of normal. It was important. It was needed. So, we figured, ‘Why not?’”

Pausing for a moment, she smiles into the ZOOM, and confesses, “I think I didn’t realize the size of it until we were done. Until then, it was a puzzle we needed to put together. Every day, it was ‘What needs to be done? What questions can we answer?’ Little things that built bigger things…”

To hear Durant talk about the “Bubble,” it seems so sane.

Consider the following:
• The Disney/ESPN Worldwide Sports Complex had seven basketball courts
• An additional seven full courts had to be built,
• plus two half courts for shooting, and three elongated game floors for social distancing.
Each of those courts measures 120’ x 60’. The actual playing floors are 94’ x 50’ And the ceilings had to be high enough to allow for men just shy of seven feet to play.
• To get the wood, they borrowed from teams and reached out to their supplier.
• In the end, it took 14 trucks to haul the materials to create those other courts, as well as 90 hours to get them assembled.

And that’s just the flooring. How do you house 22 teams with their staff? How do you maintain COVID safety protocols? How do you get everybody fed?

Laughing, Durant breaks it down even granularly. “Even more than where do you stay, and how do you feed all these people, you have to remember: these are basketball players! The operational realities can get very specific.

“We were needing to get bed extenders, lifting shower heads. What were the menus? Because they have to eat, but they’re also in training and that’s very specific. Things as simple as that, but we needed to get it right. And the only way any of us – Disney, the NBA, the MLS – would do this was if we knew we could keep everyone safe.”

Ultimately three hotels – the Gran Destro Tower, the Grand Floridian and the Yacht Club – on the Disney property were enlisted. Each team had a “food room” with a 24 hour chef on call, as well as room service.

Twenty-two teams with 37 people total were the initial bubble. No guests, no outside contact, no leaving. And yes, the NBA installed “a snitch line” recognizing that the athletes, coaches and trainers were in some ways stewards of their own health and safety.

“I was very proud of them,” Durant says. “These players stepped up as amazing leaders and used the magnitude of the platform they were given for good. They inspired so many people by their playing, but also how they met the challenge (of this professional reality).

“To have 346 players show up, to have an agreed upon safety protocol in place… Everything was tweaked along the way, but in the end, it happened. I know sports, the importance and power of it, so for this to happen, it was a good thing.

“And beyond stepping up beyond even what happened here, I was proud about NBA Arenas becoming voting sites.”

When did the magnitude hit of what you and your team had done hit you?

It wasn’t until the first game. I showed up at the arena to watch them play. To see the actual players in action, it hit me.

We all needed a sign of normalcy. Sports are something to cheer for, something that has everyone cheering together regardless of gender, ethnicity, orientation. In that moment, wow.

You talk about teams …

I am incredibly proud of the people who helped make this happen. Disney for applying what we had learned in the phased re-opening of our theme parks to enable these organizations to play out their season and tournament in a responsible way.

Our site played host to 223 professional games/matches during a period of time when many sat dark. We all understood the significance of the moment – it was bigger than us – and were grateful to contribute.

How were these initiatives formulated and strategized?

It helped tremendously that our companies (Disney, NBA and MLS) had long histories together. Those relationships, the mutual respect and understanding. That allowed our conversations to start from a familiar place, with a common goal – even in the midst of our unfamiliar situation.

While we were working on the plans, I kept hearing Robin Roberts in my head saying, “Dream big, but focus small.” It was a big dream, a really big dream, with hundreds of things that needed our focus. From managing complicated schedules, to ensuring the turf was right for MLS, to collaborating protocols, to providing off-court experiences that could entertain and keep our NBA guests comfortable.

We worked through everything as a team, solved for each piece, learned to be flexible, and did this together to bring a big dream to life.

In the year that was 2020, we linked arms and learned together, and sometimes cried together. I believe we are stronger because of it.

What helped you most professionally in terms of coping?

In times like this, it helps tremendously to feel that others “get” you and are there to support you. My team at Disney – my leaders, peers, my direct team… every direction – have given me unwavering support. They listened when I needed to talk, reached out when they didn’t know quite what to say and gave me space to feel.

They understand that I am human and my experiences in the world are part of the package that makes me the person and leader I am at work. To have people there for and with me on this journey continues to give me the energy to show up every day with optimism and hope.

The importance of inclusivity and diversity is more important than ever.

As a business, we have had to shift and change many things as we navigated the pandemic. One thing that did not change was our commitment to diversity and inclusion. It remains a top priority because it is so important and has become an even bigger part of our daily conversations over the past year.

Each of us has an obligation to ensure diverse perspectives are not only welcome but incorporated; and to speak up when that commitment is not realized. At Disney, we have not only increased our efforts to continue conversations and invite deeper dialogue but have also taken action to foster allyship across the organization.

The real work comes in creating sustainable culture change that is steeped in understanding (the issues and gaps) and accountability. We need to maintain our focus to realize meaningful progress.

With all the hardship, I’m sure you were giving back.

The focus on represtentation and equity is not new for me, but part of my life’s work. I’ve long been involved in the T. Howard Foundation; whose purpose is to increase representation in the media. I’m an alumnus of the Foundation’s internship program and now serve on the board.

I am here because someone gave me a chance. I want to be that “someone” for many others. Representation in boardrooms and newsrooms has never been more important.