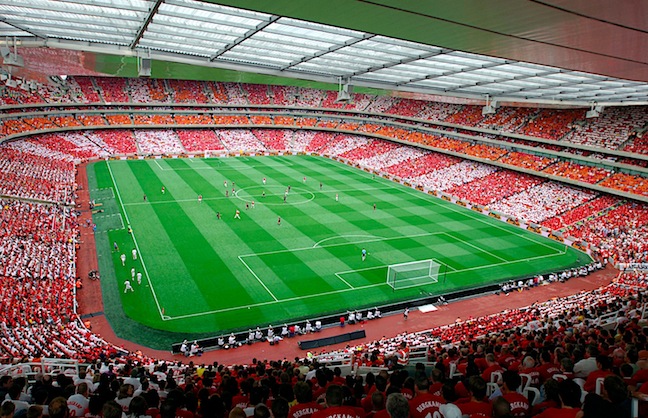 The language may be the same, but when it comes to soccer — ahem, football — there are some blatant differences between its established history in the United Kingdom and growing popularity in the United States. Football in the U.K. is a way of life for many.

Season ticket holders span generations to Clubs established 100 or more years ago. The oldest teams in Major League Soccer began play in 1996. The largest stadium in the Premier League is the home of Manchester United, Old Trafford, which seats more than 75,000. Arsenal’s Emirates Stadium in London holds more than 60,000. The largest soccer-specific stadium in the U.S., Red Bull Arena in New Jersey, seats just over 25,000, with most holding around 20,000. Though some obvious discrepancies exist, U.S. and U.K. teams have found themselves on the same playing field when it comes to one thing: social media.

Previously, we looked at how teams in the U.S. use social media. Los Angeles Galaxy leads the social media efforts in the U.S. with the largest number of followers. As of Feb. 8, the L.A. team had 581,659 Facebook ‘likes’ and more than 130,000 Twitter followers. Those sound like big numbers. Considering the team has been playing only 16 years, they are big numbers. However, compare those numbers with Barclays Premier League team Arsenal FC and it becomes apparent that a long history carries a lot of weight.

Arsenal FC is just 40,000 ‘likes’ away from 13 million Facebook fans, and has more than 2 million Twitter followers, with 2,154,157. Even in a culture that seems to have soccer ingrained into the lifestyle, social media plays an important role.

“We now live in a 24/7 media landscape where news breaks instantly, so for us, it’s vitally important to be a part of that social conversation,” said Charles Allen, head of Marketing at Arsenal FC. “ Social media is a fantastic way for us to engage directly with Arsenal supporters wherever they are in the world and for them to engage with us.”

Allen said that Facebook and Twitter are the most popular social sites. The team posts several times a day, sometimes linking to stories on its official website or encouraging fans to take part in the weekly Arsenal Quiz using a specific hashtag to win prizes.

“Essentially, it sees a selection of our first team players taking part in a live Q&A every few weeks, where they answer a range of questions posed by the fans,” said Allen.

“The takeovers always generate lots of interesting and fun questions and help to provide a nice insight into what makes the players tick off the pitch,” he continued. “Importantly, the players enjoy doing it, too.”

To ask questions, fans use a dedicated hashtag. Allen said that the takeovers have become so popular that they regularly trend on Twitter. The Arsenal Media Group even films the takeovers so that fans that missed them, or don’t have a Twitter account, can watch online at Arsenal Player, the Club’s online video channel.

Social media also stretches to the international fan base, helping interact with fans who can’t necessarily come enjoy a game.

There are Arsenal fans in China, Malaysia, Hong Kong, Indonesia, and other Asian countries that use social media to interact with the team. To connect with those fans, Arsenal uses QQ Weibo, a popular social networking site in Asia.

Since it launched in summer 2012, nearly 1 million fans have followed Arsenal’s Weibo page. At press time, the page had 998,604 followers.

“Last year’s game against Manchester United coincided with Chinese New Year, so we encouraged Chinese supporters to follow our Weibo page and post messages of support that we then broadcast on the electronic advertising boards during the game,” said Allen. “As the game was televised all over the world, it was incredibly powerful for Chinese fans to see their messages beamed to millions, and as a result we saw a massive upsurge in our number of online followers.”

“Even though many of these supporters will probably never come to a Premier League game, that doesn’t mean we can’t engage them and make them feel like a part of the Club’s community,” he added.

The last two years, Arsenal has organized preseason tours to Asia. In the summer of 2013, the Club will visit Indonesia.

Having millions of followers is great. It helps teams connect with fans and interact in ways that didn’t used to be popular. But in what ways can teams monetize social media? At Arsenal, social media will be used as an information-gathering tool, building the customer relationship management (CRM) system so that the team can create packages that are customized to the interests of specific fans.

“We are currently making some massive investment at the Club in relation to our CRM system to make sure we have the most detailed view of every individual that interacts with the Club on any level,” elaborated Allen. “We want to get to know them better so that we can provide them with information that is totally relevant to them. We will be able to create and tailor packages for individual supporters and are confident this will result in increased revenue over time.”

Allen said that using the CRM system should let the team know how the fans like to interact. They also look at customer feedback and are open to new ideas and suggestions on how to better utilize social media.

“Feedback from supporters and the industry has been very positive,” said Allen. “We’re always taking feedback on board and looking at ways that we can continue to innovate.”