An Anchor for Port San Antonio 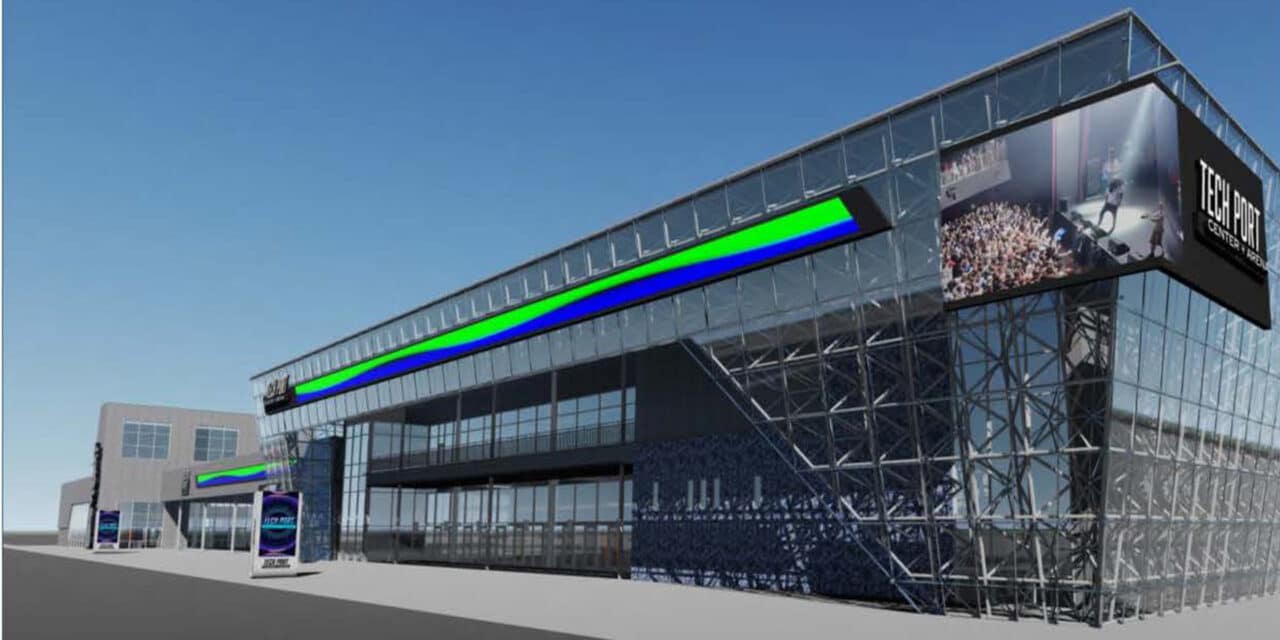 A rendering shows the Tech Port Center and Arena in San Antonio, scheduled to open in the spring. (Courtesy venue)

Can a port be a port without water? Will having an arena make it a better port?

Eric Blockie will tell you yes to both questions. Blockie, a 30-year industry veteran who most recently was the event programming manager for San Antonio’s Alamodome, has moved less than 10 miles southwest to become ASM Global’s general manger for the Tech Port Center and Arena, scheduled to open in the spring. He was announced as the building’s GM in September.

The venue is being built at Port San Antonio, a 1,900-acre portion of the former Kelly Air Force Base, whose closure was announced in 1995 and completed in 2001. There it will join more than 80 tenants, employing about 15,000 people in sectors such as aerospace, logistics, robotics, manufacturing and cybersecurity. Some of those tenants occupy buildings left over from the old base and others are new construction like the arena.

The arena, being built for concerts, esports and events, will have a capacity of 3,300, a good size for the city’s music scene, Blockie said. “We have the fabulous Tobin Center,” he said — its H-E-B Performance Hall seats 1,760 — “and then we have Freeman Coliseum,” which holds almost 12,000 for concerts and was built in 1949, then renovated in 1993, so the new arena will provide a new and different option.

The $60 million project will also include a food hall with six restaurants operated by ASM Global’s food services group, Savor; an esports gaming center; the San Antonio Museum of Science and Technology; and a conference center, among other attractions.

“So there’ll be a lot of things open every day, multiple events going on every day all under one big roof,” Blockie said. “And I think it will also spur development out here in Port San Antonio, because everybody … can just come here, grab and go (from the restaurants) or hang out, or maybe we can do some fun stuff on Friday afternoon, happy hours with bands.”

The kinds of acts he expects to target will be excited to see what the arena offers, Blockie said.

“The Latin (and) the hard rock market is going to support this venue beyond everybody’s wildest expectations,” he said. “And with all the other amenities that we can provide … the ability to livestream, the ability to park three buses at the dock. And the trucks can load right onto the stage, and if your crew wants to eat catering, here’s a meal ticket and go eat at one of my six restaurants. I’ll settle with them later.

The tech inside the building won’t stop with the museum. Tailoring a venue for esports, in a location surrounded by the latest innovations, means Blockie will set the bar high.

“The amount of data that we can push and pull out of the venue is just going to be mind-boggling for everybody. We’re talking with companies right now, with Oculus (virtual reality headsets) and 360 cameras inside the venue and live streaming. … We’re trying to bring the best of everything to the table.”

That tech will benefit performing artists as well, and Blockie is eager to give performers the chance to livestream from his venue. “And then just give the artists the content — you own it, post it up on your video page,” he said. “I don’t need to own it. I’d like to own it, but I understand how the business works.”

The business that goes on around the building at Port San Antonio should add corporate events to its schedule.

“I think with the people that are here on site and the city of San Antonio continuing to grow, I believe that our corporate business is going to do well,” Blockie said. With organizations such as Boeing, Plus One Robotics and the U.S. Air Force Cyber Command on site, “they’re looking for a place opposed to an airport hangar with a bunch of pipe and drape to bring in some high-profile people, and I do you believe that our ability to do corporate events, and present something that they’ve never seen before and broadcast it worldwide, will also enhance our ability to be as diverse as possible.”

With opening day a few months away, Blockie is concentrating on the construction. His management experience at several venues included helping to open them, such as the former Verizon Wireless Amphitheater northeast of San Antonio, where he was general manager for eight years through 2009. What did those experiences teach him? “You’re at the mercy of the supply chain,” he said with a laugh.

“It gave me an insight on what not to do here,” he said. “I can’t go running around with my hair on fire on a construction site in my collared shirt, because I know things take time.”

But he can make sure contractors know what needs to be accomplished. “If we say we’re going to do a show April 15, even if you have a supply chain issue, that show can’t happen on April 17,” Blockie said. “I can’t hear that. It’s not going to happen, because we don’t live in that world.”

And to settle that port issue: “They call it Port San Antonio because we have ground (transportation) and there’s a rail yard that comes through here and we have the airport,” an active runway shared with adjacent Lackland Air Force Base, Blockie said. “The only thing we don’t have is a boat, but we’ve got every other way of getting stuff in and out of here.”