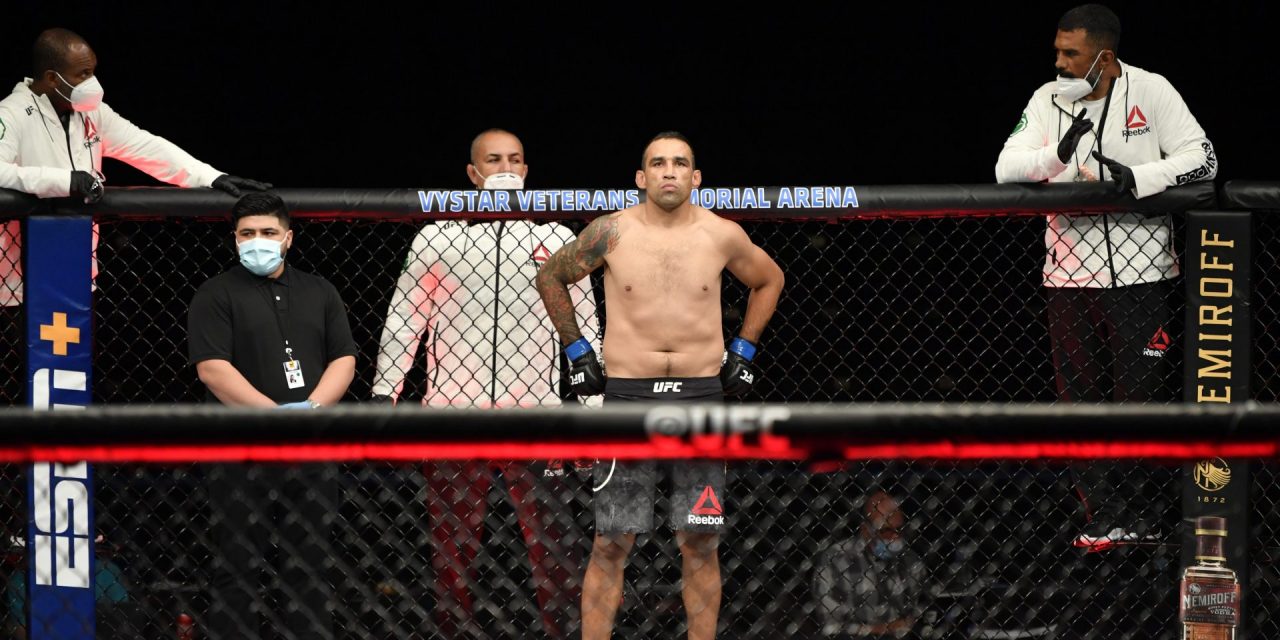 Playing host to UFC 249 in an empty arena proved to be “surreal all the way around” for Bill McConnell, but it went a long way toward regaining the trust and confidence of all stakeholders involved in live entertainment, he said.

Since 2013, McConnell has served as ASM Global’s general manager of VyStar Veterans Memorial Arena in Jacksonville, Fla., after spending 25 years at the NFL. In an interview with VenuesNow, McConnell discussed arena operations for the event Saturday and the adjustments made during the height of the COVID-19 pandemic.

UFC 249 was among the first live events held in North America after the national shutdown in mid-March. As a result, Jacksonville was thrust into the spotlight for a high-profile production in which new safeguards and protocols were established to protect fighters, staff, media and pay-per-view television officials. 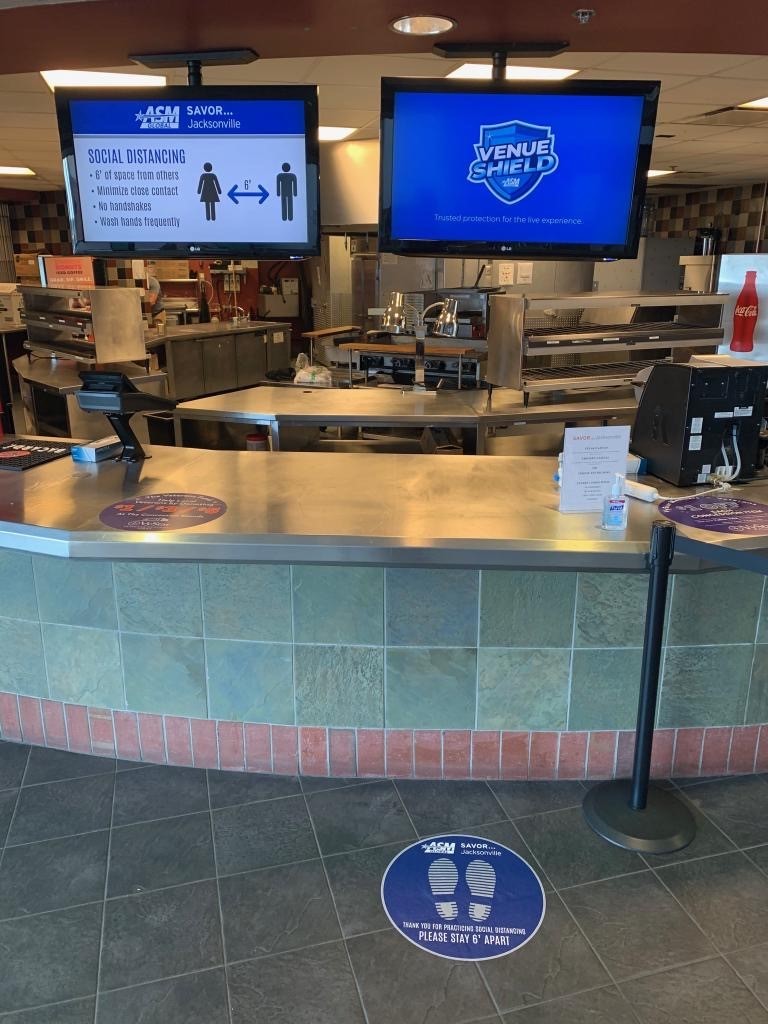 ASM Global is testing its new VenueShield program at the arena for the events. (Courtesy VyStar Veterans Memorial Arena)

The guidelines serve as a model for other venues to follow in the coming months as arenas, stadiums and convention centers start to reopen, eventually with patrons filling those facilities.

VyStar arena booked the event after unsuccessful attempts by UFC to hold it at Barclays Center, Tachi Palace Casino Resort in California and UFC’s production facility in Las Vegas. It landed in Jacksonville in part because of Bob Newman, ASM Global’s president and CEO, and his relationship with UFC principals, McConnell said.

In addition, McConnell said Florida’s State Department of Business and Professional Regulation was impressed with UFC’s detailed plan after company President Dana White turned his attention to Florida for the TV-only event.

The second of three UFC events in Jacksonville took place Wednesday night, with the final card set for Saturday.

“The governor of Florida and the mayor of Jacksonville supported it, knowing that the plan in place was solid,” McConnell said. “We were off and running once all of that alignment was in place.”

One fighter and two cornermen tested positive for COVID-19 prior to UFC 249 and were not part of that night’s production.

McConnell ran down an extensive list of precautionary measures for the events, spearheaded by UFC in conjunction with the city of Jacksonville, which owns the arena, the state of Florida and other governmental entities. The common thread was mitigation of risk for everybody involved in the MMA production, he said.

About 100 people tied to ASM Global, security contractor S.A.F.E., in-house food provider Savor and City Wide, the arena’s cleaning and sanitation firm, worked the first event. All told, 250 people were in the building among UFC and ESPN personnel, fighters, coaches and media.

For ASM Global, the new company formed last year after the merger of SMG and AEG Facilities, the three events present an opportunity to test VenueShield, its new branded environmental hygiene program. In Jacksonville, multiple protective measures were put in place before people could enter the arena.

Rapid antibody tests are given to all entrants along with daily temperature checks. Nobody is allowed inside the venue with a temperature higher than 100.4 degrees. All workers are asked a series of health screening questions, and social distancing measures were put in place at entry points to prevent cross-contamination.

Full-time arena staff members must contact their supervisors beforehand if they are sick or symptomatic and are instructed not to come to work. Before the first event, two separate virtual training sessions were held for employees, focusing on social distancing practices, washing hands, wearing face coverings and sanitizing equipment.

Inside the arena, additional hand sanitizing and hand washing stations have been installed and social distancing signs are placed around the building with floor markings and messages displayed on video monitors and posters.

One key piece of event production was extending the typical load-in for UFC from one to three days to help those crews keep their distance from each other and reduce the risk of contamination, McConnell said.

“We were able to divide by one-third the labor calls, which allowed the workforce to spread out,” he said. “It was a big part of the collaboration and helpful to mitigate risk. We set up 26 different zones in the arena with tight controls on who comes and goes between those zones.”

Savor fed everybody working UFC 249, including media, with prepackaged meals distributed from concession stands on the main concourse. The tables where they consumed food were spread apart and some chairs were removed to enforce social distancing.

UFC paid a rental fee to use the arena and is covering all event-related costs. It’s not about driving revenue but showing the world that live events can be run successfully in a post-COVID environment, McConnell said.

“We all need to do our part, all of us at all levels,” he said. “We’ll continue to refine protocols and procedures that will allow these transitional events to return in the future. There will be elements to this crisis that will be new, but I’m hopeful that those things that we learn will make us better when we get back to normal.” 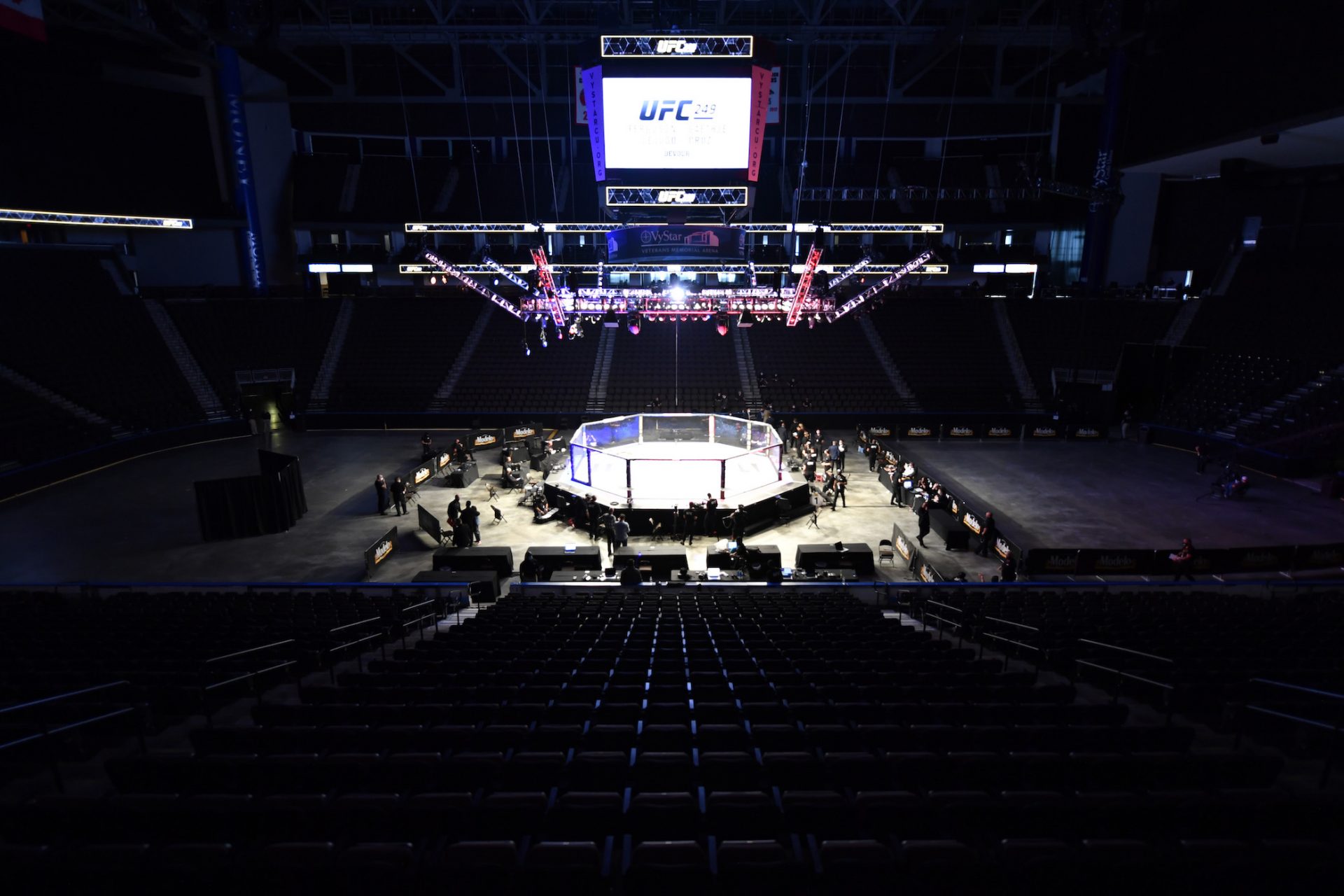 About 250 people were in the building for UFC 249. (Courtesy VyStar Veterans Memorial Arena)