Batter Up for the Big Concerts Baseball not the only thing drawing fans back to ballparks

Once baseball games welcomed fans back to stands, stadium concerts weren’t far behind.

For several American ballparks, the first proper post-pandemic stadium show — versus the drive-in parking lot affairs many staged earlier in the coronavirus pandemic — was the “Hella Mega Tour,” the run of 20 U.S. stadium gigs by Green Day, Weezer and Fall Out Boy from late July to early September.

The tour had an auspicious start July 24 at Globe Life Field in Arlington, Texas, where in addition to beginning the trek, it became the first concert in the history of the new home of the Texas Rangers, which opened in 2020.

“Our old stadium was not initially designed for concerts,” said Sean Decker, Rangers executive vice president of sports and entertainment, of the team’s former home, Choctaw Stadium (formerly Globe Life Park), across the street from Globe Life Field. “We spent a ton of time from 2017 on designing (Globe Life Field) to be a world-class venue for concerts.”

Those considerations ranged from acoustics — until “Hella Mega” arrived, “not knowing what a closed-roof stadium was gonna sound like was nerve-wracking, to say the least,” Decker said — to decisions concerning concessions, restrooms, and ingress and egress models.

“We have a lot of stuff going on at the ballpark here,” said Jaclyn Lash, vice president of special events for the San Diego Padres, who play at Petco Park. “Besides just baseball, we do about 200 events per year, whether it’s Supercross or whether it’s holiday events or even private corporate events. We’re really busy, but we make stadium shows a priority, because we love it for San Diego and San Diego loves it when we have concerts here.” 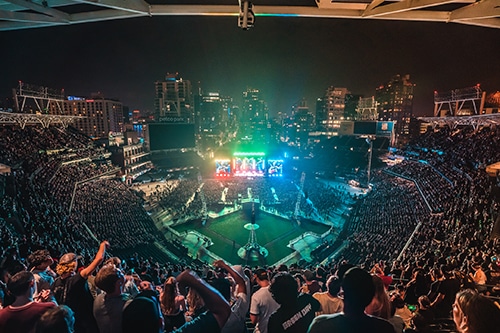 “The exciting thing we’ve seen in our business over the last decade or so is more activity in stadiums,” said Ryan McElrath, Live Nation senior vice president of global touring.

While some of this traffic is generated by acts like Dead & Company, which has traditionally mixed a smattering of stadium plays into summer amphitheater tours, full-blown stadium tours have become increasingly common.

“We’ve been lucky to work with a lot of these stadiums on various tours,” said McElrath, adding that ballparks now “put more focus on being able to host concerts, so there’s always an open dialogue about what their availability is like.”

“As an industry,” he continued, “we’ve found ways to create staging and production components that have less impact on the field, that allow a lot of teams to host more events than they would have a decade ago.”

But even with enthusiastic stakeholders, booking concerts in stadiums is a tricky proposition.

“Those buildings are there to host 80-plus baseball games a year and that, of course, is their first priority,” McElrath said. “We’ve got to work within the windows that are available as (teams) take road trips.”

While music’s speedy return to stadiums post-pandemic might seem counterintuitive — a stadium show often draws at least twice as many people as one in an arena, after all — Decker and Lash both note that ballparks already had weeks or even months of experience processing fans and implementing COVID-related safety protocols following baseball’s return with fans in stands in the spring.

“We’ve done many games of 40,000-plus people prior to the show,” said Lash of “Hella Mega,” which drew 33,961 fans for its Petco Park stop Aug. 29. “We were good at knowing how to make a safe experience for both fans and players, and we wanted that to translate into a stadium show.”

In 2020, Decker and his team hosted drive-in concerts, graduations, baseball’s National League Championship Series and World Series, and the National Finals Rodeo at Globe Life Field, meaning the Rangers “had a lot of practice” by the time baseball’s 2021 season arrived in April.

“We absolutely had experience coming into it and had a lot of confidence we could execute at a high level,” Decker said.

Meanwhile, the open-air nature of sporting events and concerts, whether at stadiums, amphitheaters or festivals, further bolstered fan confidence.

“There’s a lot of crossover between sports and music,” Lash said. “We’ve been finding that more and more through the pandemic. We’ve been chatting with different tours, with different promoters to just let them know best practices from a sports perspective, and vice versa. We’ve really helped each other a lot.”

It’s a fruitful partnership that seems poised to continue. In 2022, both Globe Life and Petco will host “The Stadium Tour,” a package bill featuring Mötley Crüe, Def Leppard, Poison and Joan Jett & The Blackhearts, and the first Red Hot Chili Peppers stadium run.

“We are pretty turnkey when it comes to stadium shows, because we’ve done so many of them,” Lash said. “We try and prepare as much as possible from a standard logistical standpoint to be ready for the crowds and make sure that it’s safe and that we have the flooring down to protect the grass and that egress is easy and concessions are ready, so that when the tour comes into town, we can adjust on the fly and make sure that all the artists are happy.”

“I don’t think there’s a genre that we don’t want to bring in,” Decker said. “We’d love to do a lot more of this.”