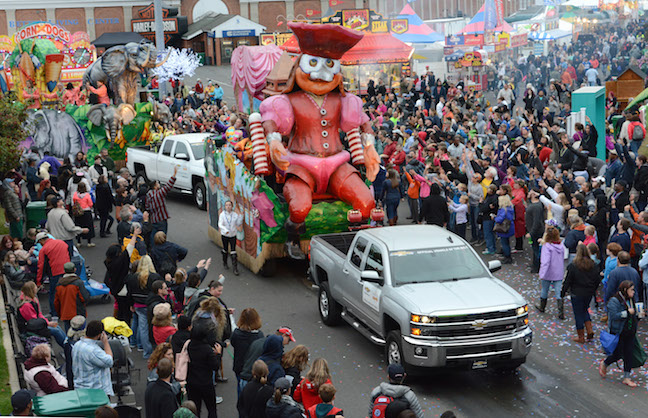 Attendance continues to climb at the Eastern States Exposition, West Springfield, Mass., breaking the 1.5 million mark for the first time and besting the previous record of 1,498,605 in 2014.

The final number, 1,525,553, bests that mark by 1.8 percent and is also 7.6 percent higher than last year’s 1,418,042 achieved during the event’s centennial celebration, which experienced some rain.

For this year’s Big E, which took place Sept. 15 to Oct. 1, the weather actually started out hotter than usual, so the numbers surprised CEO Gene Cassidy. “Between the 23rd and the 27th, for six days, the temperature was above 92 degrees, and one day the heat index was 104.”

And still, on the middle Saturday of the fair, 172,000 people attended and, on the second Monday, there were 77,000 fairgoers on the grounds. “It was huge for a Monday and it was extraordinarily hot,” Cassidy said.

Cassidy, in his current role at The Big E since 2012, has been working to build attendance. “It’s my goal to keep the admission price steady where it is for the foreseeable future,” he said. “If I can build volume, and I’ve been able to do that, we don’t have to raise admission.”

He estimates that the current gate admission prices of $15 for adults and $12 for ages 6 to 12 have been in place since the early 2000s. Ages 5 and under are free and the price for senior citizens is $12. About 80 percent of the patrons who purchased 100,000 $8 tickets in a June flash sale took advantage of them, Cassidy added, for a 20 percent breakage.

“I don’t think the flash sale interrupted the full-price admission at all,” Cassidy said. “It increases the per cap on the ticket sold. I stole the idea from the Wisconsin State Fair. It was a marvelous idea.”

Cassidy believes The Big E is drawing more fairgoers through a smart mix of entertainment and exhibits. Two casinos about 70 miles away in Connecticut made it difficult to get musical artists because of radius-clause restrictions put on the acts there. “What we did is we looked at mid-range names, mid-range talent, and we bought more of them and showed them more frequently,” Cassidy said. “In doing so, it caused more people to want to be at the fair more than once.”

The Big E has two primary concert venues, the 6,300-seat Xfinity Arena and the 2,200-seat Court of Honor Stage.

“There was one day it rained at the fair and, and even though it rained, we had almost 130,000 at that TwinE Festival,” Cassidy said. “It was quite a draw. People wanted to be at the fair.”
The TwinE Festival featured its own food service, dubbed Tacos and Tequila. The event cost $29 and included gate admission. All of the Xfinity Arena acts were well received, Cassidy said, especially Swindell, who sold out.

Well patronized exhibits included “Michelangelo’s Sistine Chapel: The Exhibition,” which was set up in a commercial building. That drew bus tours of attendees, Cassidy said. Also popular was “Eastern States Exposition: A Walk Through History,” which featured a lot of memorabilia that had been collected for last year’s centennial fair. “People really enjoyed spending time in that location,” Cassidy said.

The Big E also is the site of 25 parades, including 17 Mardi Gras parades—one each day of the fair—plus eight additional parades without the Mardi Gras floats.

Budget for the musical acts, the exhibits and the parades was about $2.1-$2.2 million, Cassidy said. Budget for the entire fair is nearly $20 million, he added.

“I think the weather had a lot to do with it,” he said. “We had very little rain. Even sometimes, when it’s busy, if there is rain, it impacts us more than the fair, but we didn’t have a lot of rain this year.”

The only new ride was a popular coaster, the BulletTrain. Other popular rides were the giant wheel and the Matterhorn, Chiecko said.

Wristbands cost $30 at the gate or $28 in advance and could be used Monday through Friday, Chiecko said. Ride coupons came in different configurations, but the most popular was 55 units for $60. Rides generally require three to six coupons, although some of them take eight, he added.

New in marketing this year was a TV and Internet ad that included an animated bird character named Chick-E. “The chick is a cute illustration,” said Noreen Tassinari, director of marketing. “It’s also versatile. At one point, we created a rocker chick. It’s got spiky hair.” Chick-E came in different looks, including one with Mardi Gras beads and another dressed up as a parade marshal.

The fair spent a little more on social media than in the past, making use of Facebook, Twitter, Snapchat and Instagram, Tassinari said. Fair officials also posted live from the event each day. A person would be interviewed each time, and the host would monitor social media, offering tickets to the first person who messaged in. “That was very well-received,” Tassinari said.

The breakdown of advertising was print, 8 percent; radio, 35 percent; online, 15 percent; and out-of-home, such as billboards and bus shelters, 15 percent.
Popular foods at this year’s fair included Deep Fried Holy Cannoli, which is exactly what it sounds like; the Flatliner Burger, which included two patties, cheese, bacon, French fries and chili; and the Tots-A-Lot, a chicken “tot” pie with nachos, Tassinari. That dish won The Big E’s Big Eats Competition, voted on by fairgoers through Facebook and announced at the end of the fair.

It also was the third year for The Big E App, which helped fairgoers navigate the fair and all its offerings. “It’s quite popular,” Tassinari said. “We promote it through social and traditional vehicles.”