Black Crowes ‘Just Happy to Be Making a Racket’ 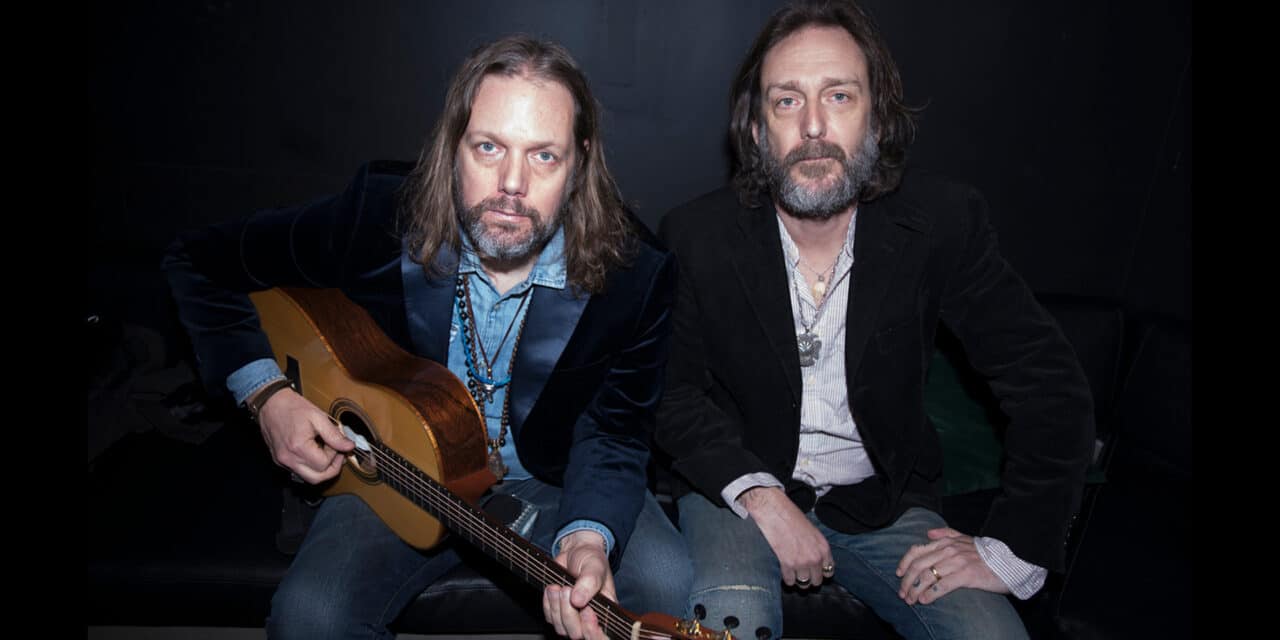 Chris and Rich Robinson are ready to rock. The brothers make up the heart and soul of the Black Crowes, and like virtually every other recording artist, they’ve gone at least 15 months without performing before a live audience.

The pandemic stopped the world on its axis. For the Robinsons, it was especially difficult, considering they had mended their fractured relationship both personally and professionally and were mapping a tour just a few months before COVID-19 crushed live entertainment.

“The whole trajectory … was going better than anything that had ever happened in the Black Crowes, except maybe the very first year in 1990,” said lead singer Chris Robinson.

A year and a half later, it all seems like a distant memory.

That’s OK. The good news is that live music will return soon on a grand scale and the Black Crowes are front and center. In six weeks, they kick off a reunion tour to celebrate “Shake Your Money Maker,” their first record, released 31 years ago.

Most tour dates remain intact from the original summer 2020 itinerary, which was postponed because of the pandemic. The 37-show tour is scheduled to start with two shows July 20-21 at the Ascend Amphitheater in Nashville and will play amphitheaters plus the Forum in Inglewood, California.

In addition, the Crowes headline the New Orleans Jazz & Heritage Festival in October before starting a European arena tour that will hit the United Kingdom, Belgium, Germany, the Netherlands, France, Spain and Portugal before wrapping up in mid-November.

“I can’t wait. It’s the longest I’ve gone without playing live since I was 19 years old,” guitarist Rich Robinson said.

“We’ve had a year to prepare,” Chris said, thinking ahead to launching into “Shake Your Money Maker’s” first track on opening night. “I’m excited, but I kind of have this thing that when I’m singing ‘Twice as Hard’ in Nashville, it’s going to be ‘Oh shit, we’re really out here.’”

Part of it is that the Black Crowes stand among the first bands touring nationally at outdoor venues that are all expected to operate at 100% capacity. It’s a milestone considering most amphitheaters have sat empty since March 2020.

“We’re all vaccinated,” Chris said. “We’re doing meet and greets. We’ll take our precautions and wear masks (backstage) and do what we need to do. It’s a weird thing with different states and protocols. But we have a ways to go until the end of July, and things will get better.”

By that time, projections call for 250 million people to be vaccinated in the United States, Rich said.

“That’s going to say a lot about how people feel about getting out and living life again,” he said.

“From what (experts say), the chances of catching the virus outdoors are more minimal and you throw vaccination in there and it’s negligible. If you’re freaked out, wear a mask. It’s a shed, it’s outdoors, the wind is blowing and there’s music. It’s going to be great.”

To play it safe, Black Crowes manager Mark DiDia of Red Light Management, in conjunction with Rick Roskin of Creative Artists Agency, the band’s responsible agent, made some adjustments to the 2021 route.

Together, they moved 13 dates from the front end of the tour, which was supposed to start in late June, to the back end in September. It gives the band more breathing room as states reduce venue restrictions tied to the coronavirus.

TIME TO HIT THE ROAD
It was critical for the Black Crowes to tour this year after taking 2020 off, DiDia said.

First of all, fans of the Crowes haven’t seen the band perform in five years with the exception of a few promotional “Birds of a Feather” gigs Chris and Rich Robinson did in early 2020 to hype the original tour.

“We don’t want to tour on the 34th anniversary of ‘Shake Your Money Maker,’” DiDia said with a laugh.

Second, 2022 is projected to be a logjam, packed with dozens of amphitheater, stadium and arena tours that decided not to go out this year, he said. There’s only so much discretionary income to go around, and the preference was to get out in front of the clutter.

“We spent a lot of time putting this back together,” DiDia said. “We just followed the science really. It’s important, and I wanted to make sure that we did everything in our power to go out this summer. We didn’t want to push it and thought it would be safer to start in July. Fingers crossed.”

“The guys are fired up,” he said. “Last year was the first year Chris and Rich spent the entire time at home. Think about a musician that’s been touring for 30 years and sat at home, especially in the summer. They’re raring to go. It looks like everything is going to be open for us. We only have one indoor date on this whole run, which is the Forum, and they’re telling us not to move it outside.”

It’s been a long time coming for all involved in the “Shake Your Money Maker” production, Roskin said.

Considering that touring remains a fluid process, there was a lot of thought and execution to keep the route  intact and sustain the same high level of energy as when it was announced, he said.

“The band really wanted to go out and bring this show to the fans that have been starved, not only for the Black Crowes, but for music and the live experience, and especially for a band that’s playing a seminal rock album from start to finish,” Roskin said.

“If you’re freaked out, wear a mask. It’s a shed, it’s outdoors, the wind is blowing and there’s music. It’s going to be great.” — RICH ROBINSON

“For us (as an agency), it was more like, ‘How do we do this?’” he said. “We’re sticking outdoors, other than the Forum. What we do know is that outdoor venues are going to come back first and we want to be the first ones back with the return of rock ’n’ roll.”

The first set of the two-hour show will run through the “Shake Your Money Maker” album, followed by a second set that Chris Robinson said would feature Crowes’ greatest hits such as “Thorn in My Pride,” “Soul Singing,” “Hotel Illness,” “Good Friday,” “Remedy” and “Wiser Time.”

There are two changes to the band since the initial lineup was announced in late 2019. Sven Pipien returns as the bass player after playing in the band over the course of 15 years, starting in 1997.

Brian Griffin is the new drummer. He has toured with Brandi Carlile, Richard Marx, Patti Smith and others. The rest of the group features Joel Robinow on keyboards and Isaiah Mitchell on guitar, combining with Rich Robinson, plus backup singers Mackenzie Adams and Leslie Grant.

“We won’t be playing the deepest, rarest cuts that we’ve been known to do before, but we’re crazy enough that we can’t play the exact same set every night,” Chris said. “There will be different songs to switch in and out. We want it to be streamlined and focused. That’s our presentation, and the band is built for that too.”

Dirty Honey, a rock band from Los Angeles formed in 2017 and also managed by Red Light, is the opening act for the Crowes’ amphitheater run.

‘THIS IS WHO WE ARE’
The Robinsons share a soft spot for “Shake Your Money Maker.” It marked the band’s breakout moment at a time when heavy metal music, layered with pancake makeup and hairspray, became a parody of itself.

For the Robinsons, though, who grew up in Atlanta and formed the Black Crowes in 1984, there was still a sense of adventure as they began to build their career, culminating in the release of SYM in February 1990.

They were among the few straight-ahead rock acts that didn’t rely on kitschy glam as a crutch. In that sense, they carved a niche when “rock ’n’ roll was a great wooly beast roaming the land and music was more important in terms of your culture,” Chris said.

“We had so much success on that record so early and were so ill prepared, even though we thought we were really hip,” he said. “We put together a record that had nothing to do with glam or more metal things, and we weren’t super independent with the roots-driven thing.”

The album brings to mind some of the best rock music made by the Rolling Stones, Faces and Led Zeppelin. In the 1960s and ’70s, people didn’t overcategorize music as they do now, Rich said. It was more about making music and not so much about making money.

“It was the precipice for everything we did,” he said. “Being so young, we wore our influences on our sleeve as badges. This is who we are and this is what we stand for; this is the music we love that we want to use as the launch pad for our creative endeavor.”

“Rock ’n’ roll can be reckless, it can be messy, but also brilliant and human; it breathes,” Rich said. “I have such fond memories and admiration for the album and everyone involved.”

But there’s also some soul stirred in with that rock sensibility on “Shake Your Money Maker.”

“Hard to Handle,” an Otis Redding tune, was among the Crowes’ first hit singles, and “Seeing Things for the First Time” is basically a Stax Records ballad, Chris said, referring to the legendary Memphis recording studio.

Thirty years ago, most rock bands weren’t interested in pursuing that earthy, brassy feel, he said, providing a further point of distinction for the Crowes.

“Rock ’n’ roll was a far different thing back then with millions of bands vying for a few different spots,” Chris said. “The other thing is we never played the record as a whole, even the day it came out. We had already written new songs and incorporated different cover tunes, and we definitely never played it in sequence.”

“To come full circle and concentrate on playing these songs in the album version with no jamming, it’s a different energy and a different focus,” he said. “Cruising around America playing in these outdoor venues where people will feel safe … we’re just happy to be making a racket.”

Next year, the Crowes are targeting Australia, Japan and South America, along with more shows and festivals in America, some in secondary markets. The “Shake Your Money Maker” tour will run through 2022, DiDia said.

“This is just the first step,” Rich said. “There’s always a hesitancy at first, but people are going to come out and feel such relief at being awash with music that they grew up with and love and that moves them.”