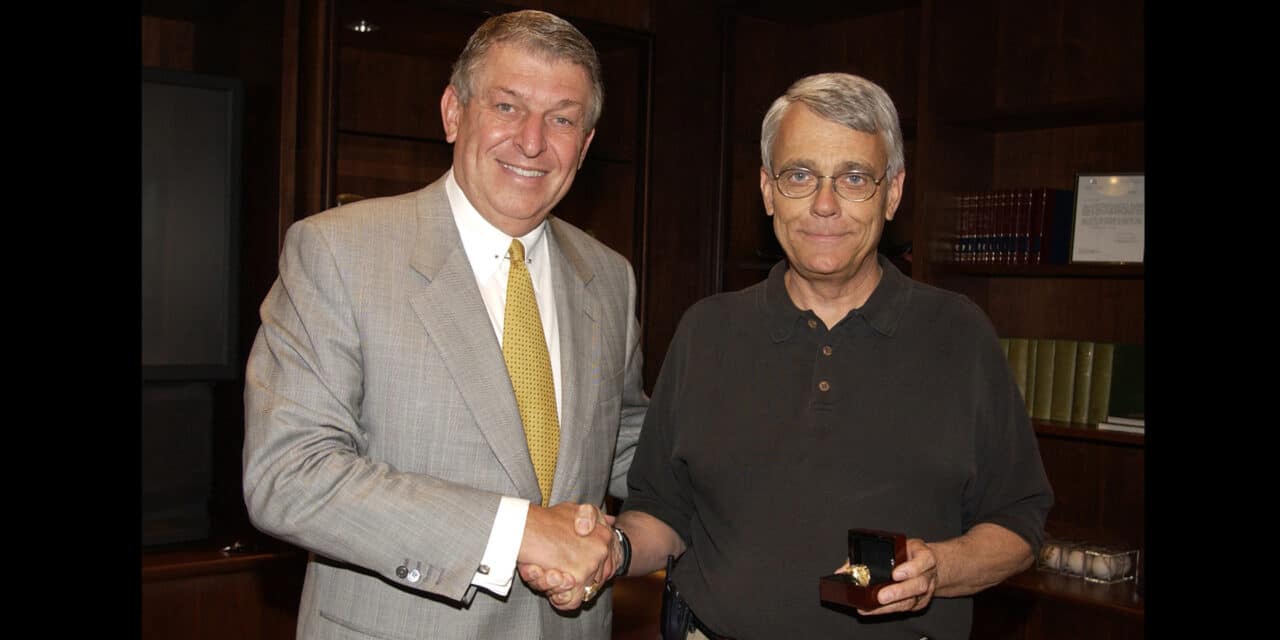 He oversaw design and construction of three downtown buildings

Bob Machen, an executive on the ground floor with the Phoenix Suns who went on to spearhead the development of four venues in the city and helped transform it into a big league market, died Aug. 9.

In 1969, before the Suns entered the NBA that fall as an expansion team, team owner Jerry Colangelo hired Machen as his ticket manager. Machen was working at Arizona State University in the computer department when he made a cold call to Colangelo to express his interest in taking a job with the Suns.

It turned out to be a fortuitous conversation and the start of a relationship that spanned 40 years, marked by the development of three downtown venues with project costs totaling $480 million.

“I’m very sorry for the loss of Bob,” Colangelo said. “He was a dear friend and a partner in all of the things we accomplished in Arizona with the sports teams and venues.”

Machen went on to become business manager for the Suns. He left after 20 years for a brief period as a hospital administrator before returning to the team as Colangelo was preparing to build a new arena in the late 1980s.

Machen effectively filled the role of owner’s representative. He oversaw the design and construction of America West Arena, now Footprint Center, and Bank One Ballpark, now Chase Field, as well as the Dodge Theatre, which opened in 2002 and is now Arizona Federal Theatre.

Several years later, Machen became campus development project manager at Grand Canyon University, a private Christian institution in Phoenix whose enrollment reached 23,000 for the 2020-21 academic year plus 85,000 online students, according to the school.

Colangelo, through his relationship with school President Brian Mueller, helped steer Machen to the position.

Together, the three men teamed up to develop GCU Arena, a 7,000-capacity venue that opened in 2011, part of the school’s transition to Division I in men’s basketball. 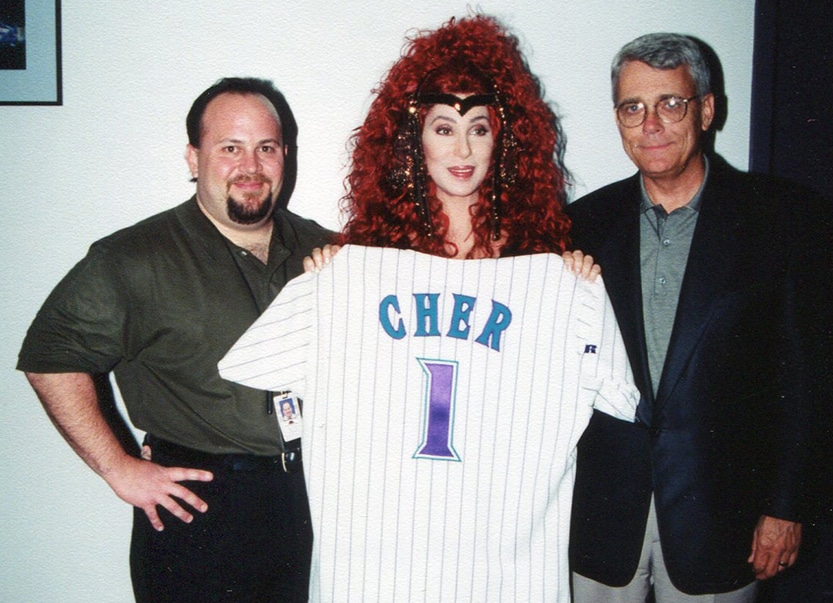 Bob Machen with Cher and Ralph Marchetta, now Footprint Center’s general manager, during a concert date at the arena in 1999. (Courtesy Phoenix Suns)

Looking back, Colangelo said that Machen came to the Suns with no experience developing sports and entertainment venues but that he was a quick learner. Whatever Colangelo threw at him, he was up to the task.

It came before the proliferation of sport management programs at the collegiate level, in which people study facility development and operations. Machen learned in the trenches and formed a quick understanding of what it took to build and run a modern sports facility.

America West Arena opened in 1992. Colangelo said the lessons Machen learned from that project helped him plan Bank One Ballpark for the Arizona Diamondbacks, which opened in 1998. It came three years after Colangelo acquired the rights to own and operate an MLB expansion team in Phoenix.

“Education is important, and the education you learn is from the pioneers, the people who started it,” Colangelo said. “Bob was part of that original pioneer group, at least in sports. He built a career out of the opportunity to be in the position to learn.”

He said, “I had great trust in Bob because he was so dependable. He got to know me extremely well and how to deal with me because I had a plate full of responsibilities. He made life a little bit easier for me to help us accomplish all the things we did over the years.”

It signaled a new dawn in Phoenix and across the NBA. The venue was among those on the front end of the big league building boom of the 1990s and put the city on the map as a modern venue attracting major concert tours.

“Those two guys were responsible for Phoenix coming out of the dark ages and becoming a real player in the industry,” said Danny Zelisko, chairman of Live Nation Southwest and a veteran concert promoter in Phoenix.

“I tip my hat to (Machen) for his involvement and direction of where that arena went,” Zelisko said. “After that, the Coyotes came in and built their own arena and we got a new NFL stadium. Suddenly, in the early 2000s, Phoenix was a brand-new market and it all links back to the Suns getting a new home and everything that followed.”

Zelisko, who started as a regional promoter with Evening Star Productions in the 1970s, had previously booked arena tours at Arizona Veterans Memorial Coliseum and the ASU Activity Center, two older buildings.

The Suns were a tenant at the coliseum for 23 years at the state fairgrounds before moving to their new arena.

The “Purple Palace,” as many folks in Phoenix called it, reflective of the Suns’ primary color, quickly changed the entertainment landscape as the city grew to a top 15 market. Zelisko teamed with Machen to fill the 18,400-seat facility with virtually every major tour.

“We built that up together immediately,” Zelisko said. “It got nearly all the shows that came to the market, pretty much unopposed because it was a beautiful building, and it still is to this day.”

Machen was known as a straight shooter and conservative in his beliefs, Zelisko said.

“But he had a good sense of humor, which (was necessary) dealing with the likes of me,” he said. “Bob was a man of huge principles and sometimes when you’re in the midst of those things, you can butt heads, but it wasn’t one of those things where everybody walks away butt-hurt. It is what it is — you go to the mat, figure it out and move on. That was pretty much what we did.”

As an arena manager, Machen was also on the front end of the industry trend for NBA teams running their own buildings instead of municipalities, according to Pat Christenson, president of Las Vegas Events and former director of UNLV’s Thomas and Mack Center and Sam Boyd Stadium.

Christenson first met Machen on a visit to Phoenix in the early 1990s to pick his brain on sports marketing strategies for Thomas and Mack Center, which was a separate entity from the UNLV athletic department.

They became good friends within a close-knit group of arena managers that included Scott Williams from Salt Lake City’s Delta Center and Brad Mayne at the Arrowhead Pond in Anaheim, California. Together, they formed the Mountain Entertainment Network, the forerunner of ArenaNetwork, a group on the West Coast working together to book more events in their facilities.

“Bob was in that initial phase when the building manager was part of the sports team from the start, in design, opening and operations,” Christenson said. “Financially, with sponsorships and the way they integrated it into everything was groundbreaking stuff. The venue became critical to the team, and he was part of all of that.”

“Looking back, it’s easy to forget some of the history of how the venues evolved,” Christenson said. “He was at the beginning of this new generation of venues, which were the most productive, even today. People are tweaking them now, but the fact that ownership was taking over all aspects was key. The city wasn’t running it.”

Ralph Marchetta, Footprint Center’s senior vice president and general manager, was hired by Machen as an event manager shortly before the building opened in 1992. At the time, Marchetta was working at the coliseum.

He worked his way up the chain of command under Machen and later Paige Peterson, the arena’s general manager from 2001 to 2007.

“I look back on my career and the mentors I had and Bob was certainly one of them,” Marchetta said. “He really drilled into us the focus on service and having high standards. He always strove to do the right thing.”

He said, “Bob didn’t really have a facility management background, but he had management skills. When he took on the arena project, it was the biggest thing to happen in this city. It was a huge deal back in 1992, on the front end of the new arena craze.”

Mayne, now president of the International Association of Venue Managers, opened the Anaheim arena in 1993, one year after the Phoenix venue opened. Together with Williams at Delta Center, which opened in 1991, the three GMs shared information and ideas gleaned from the three new NBA and NHL venues.

“Back in the early ’90s, it had such a strong bass, and it didn’t hurt the ears but it made the heart rhythm change to the thump,” Mayne said. “They had this great new facility that Bob was very much involved in creating, and it was a very successful venue.”