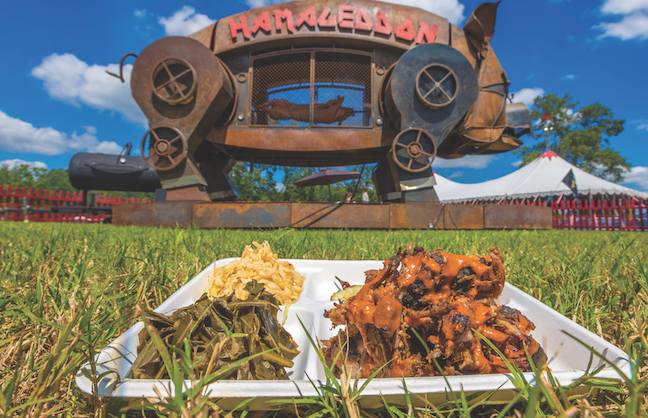 Henri is the mascot for Hamageddon, the pit where professionals roast pigs at the festival. (Courtesy Bonnaroo)

“I serve 3,000 to 12,000 people at festivals leading up to Bonnaroo,” said Weber, who owns and operates a pizza company called Pies for the People. “Then you have Coachella and Bonnaroo, which is 70,000 people.”

In other words, it’s a whole different ballgame — or food game, for that matter. The massive music and arts festival takes place on a 700-acre farm in Manchester, Tenn., about 70 miles southeast of Nashville, where roughly 150 bands play on multiple stages. This year’s festival is scheduled to start tonight and run through Sunday, and headlining acts included Eminem, the Killers, Sheryl Crow and Paramore.

AC Entertainment and Superfly Presents produce the festival. As fans meander among the stages, they’re presented with hundreds of food and beverage options, carefully planned by Bonnaroo’s director of concessions, Chris Crowell, and her team of 25 employees.

Street tacos, a pig roasting pit, funnel cakes, dumplings, doughnuts, burgers, Mexican and Creole food are only a fraction of the food options offered at Bonnaroo.

“The tricky part with Bonnaroo is it’s so spread out,” Crowell said. “Over the years, we’ve had the same locations that we’ve had for several years. We learn from year to year and make sure we provide the right amount of food. I think that variety is really key.”

Crowell has worked with Bonnaroo since it started 17 years ago, so she’s familiar with the ins and outs of the event.

A total of 15 food trucks are spread throughout the venue, eight of them stationed at the Food Truck Oasis. The others are carefully assigned to camping spots and other areas on the farm.

Each year, Crowell and her team try to expand food options. This year, they had celebrity Chef Tim Love operating The Love Shack, which offered a gourmet barbecue pit called Holy Smokes.

“Now that the festival food is good, it makes it easier for (fans) to enjoy the show and the music,” she said. “All around (the food) is just better.”

Great communication with vendors and with the Bonnaroo team is key to success, Crowell said.

“I want to make sure these vendors are really taken care of. It’s not easy setting up at Bonnaroo. There’s not a lot of infrastructure. You’ve got to get set up and be prepared for all the different weather that comes,” she said. “Some vendors stay open 24 hours, which is a long time to stay open.”

Bonnaroo vendor coordinators are assigned to specific areas throughout the venue, working with vendors and making sure they have what they need.

She says the communication with food vendors begins months before the event.

Vendors appreciate that communication and better understand what to expect, Weber said, highlighting that he’s been a food provider at Bonnaroo for 11 years now.

“It has been a pleasure to be a part of Bonnaroo for all this time. They are a professional company to work for. It’s a serious business when you’re handling food and serving food for people over a four-day period. You have to have these regulations. It’s easy to get caught up in the party of it all,” Weber said.

It would be too hectic to manage the long lines of people wanting food if the trucks didn’t have a tent area that provides them more space for serving, Crowell said.

Food vendors also have a huge amount of work organizing employees before the event.

“Before I serve my first slice of pizza at Bonnaroo, there’s a lot of work just getting the pizza there,” he said. “And the logistics of coordinating all those kids to come to work at different times, getting them credentials and getting them to camp.”

Vendors usually hire locals from around Tennessee to work with them each year. Weber typically has 36 employees who help throughout the four-day festival, and the majority of them live in the area.

Weber travels around the country in a semi truck, hauling his pizza products and tents with him to festivals, starting in March and usually ending the festival season in October.

He also owns two Pie for the People restaurants, one in Los Angeles and the other in Seattle.

Vendors are required to use compostable materials to serve food, including plates, cups and utensils. That’s one rule at Bonnaroo that is nonnegotiable.

Crowell also asks vendors to source ingredients locally from farms surrounding Manchester. She gives each vendor a list of farms to choose from, but not all concessionaires take advantage of the suggestions.

“Everything I do is fresh, every time I get to a festival. I don’t cut corners and use frozen products,” Weber said. “I source as many of my ingredients as possible from local farmers. That’s not a tremendous amount, but we do what we can do.”

Beverages are also big business at the festival. Bonnaroo has the Broo’ers Festival, where 26 breweries from across the nation bring two types of beer from their establishments, giving festival attendees a plethora of options.

Coffee is also a necessity, and several coffee vendors are spread out on the farm.

This year, the coffee company — owned and operated by husband and wife team Debi and Doug Scroggins — celebrated eight years as beverage vendors at Bonnaroo.

“My husband and I founded the company in 2001. We started out with a small double drive-through in a small cornfield,” Debi Scroggins said. “After the recession, it was really hard to expand brick and mortar, and we started doing events. We really serve some cool venues now.”

They have three locations at Bonnaroo this year, and are employing more than 70 people. Typically, they’ll bring about 35 people with them and hire the rest locally. Most years, they reach out to the same people around Tennessee to help them run the coffee stations, which are open 24 hours a day throughout the four-day festival. Things can get a little hectic.

“You just gotta keep your head and be as organized as you can,” she said.

They’ve come up with a “Festival Crew Survival Guide” for employees to help them be successful.

“You really need to rest, hydrate, rest and nourish your body,” she said.

Her crew usually will work eight hours, rest or go to a show, eat and then work another eight hours, rotating shifts with other employees.

Another huge aspect of Bonnaroo is all of its nonprofits on site, promoting social justice and equal rights, to name a few causes.

Laura Sohn is the director of sustainability at Bonnaroo, and she organizes a huge dinner for volunteers and nonprofits each year called the BonnaRoots. It costs $50 to attend, and it acts as a fundraiser for nonprofits at the event.

It feeds 150 people, and all the food is sourced from within 200 miles of the festival.