Brewing Up Its Attendance 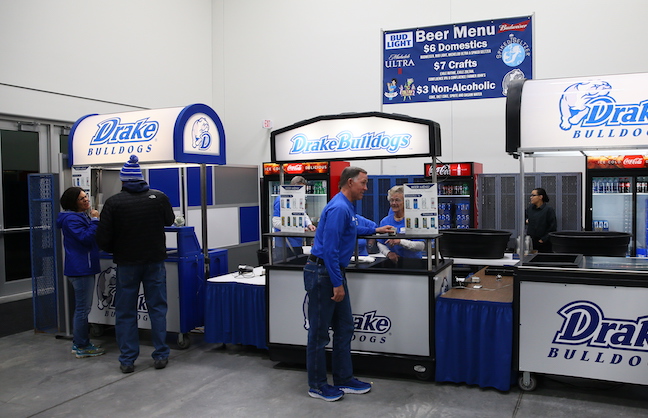 In an effort to boost attendance for men’s and women’s basketball at Drake University, officials have allowed the sale of beer this season at the school’s arena, Knapp Center.

The move grabbed headlines earlier this month in Iowa and its capital, Des Moines, which is home to the private school. Drake has a total enrollment of about 5,000. The state’s two largest public universities, the University of Iowa in Iowa City and Iowa State University in Ames, do not serve beer in public spaces at their on-campus arenas.

Drake followed the lead of the University of Northern Iowa in Cedar Falls, which last season expanded the Panther Patio bar to make beer available for all ticket holders at McLeod Center, its basketball arena. The patio, which sits at the top of the arena overlooking the floor, was previously restricted to UNI athletic donors.

Both schools are members of the Missouri Valley Conference, and Drake Athletic Director Brian Hardin was familiar with Panther Patio from Drake’s visits for conference games. It served as a model for the Knapp Center operation, he said, where beer is sold from two portable concession stands.

Drake and UNI are the latest schools to join the trend. Across the country, more than 50 NCAA Division I institutions now serve alcohol in public areas at their sports venues on campus, a number that has grown steadily over the past seven years.

Drake officials hope it helps improve attendance for Drake basketball games, which has been an issue for several years. Last season, the men’s team averaged 3,195 in home attendance, filling less than half of Knapp Center’s 7,152 seats.

The women, meanwhile, have gone undefeated in conference play over the past two seasons and averaged 2,911 in home attendance for 2017-18. Overall, they ranked 42nd among Division I teams, according to NCAA statistics.

Hardin, a Des Moines native and a Drake Relays champion as a high school track athlete, took over as athletic director in December 2017. As most new athletic directors do, he went on a “listening tour” to find how he could improve the overall operation.

Public beer sales and lower concession prices were topics Drake supporters mentioned during talks with Hardin for how to upgrade the fan experience.

Hardin sat down with university President Marty Martin, the board of trustees, the general counsel, the dean of students and facilities officials before making the decision to serve beer.

Sodexo, Drake’s food provider, sells Anheuser-Busch products for $6 a cup, plus beer from Confluence and Exile, two local craft brewers, priced at $7 a cup. In addition, the vendor priced 15 items under $5. A family can buy four hot dogs, four sodas and four bags of popcorn for $24.

“We don’t want price to be a barrier for entry to our fans,” Hardin said. “Affordability of Drake sports events should be a point of distinction in our marketplace. We have a lot of competition, not just from Iowa and Iowa State, but Wells Fargo Arena and the Des Moines Civic Center.”

The Drake-Buena Vista game drew a crowd of 3,561, about 1,000 more fans than the Drake-Coe opener in 2017. Both opponents are NCAA Division III schools, providing Drake with a fair comparison for food and drink sales, he said.

“The best part is we had no issues related to alcohol on a Thursday night,” Hardin said. “We increased our police presence and redistributed our security people around the arena.”

For Drake officials, serving beer is more about providing amenities than gaining incremental revenue. Under Iowa law, the commissions Sodexo pays Drake for beer sales are capped at 9.9 percent.

“It’s basically ‘getting people through the door’ motivated,” said Ty Patton, Drake’s assistant athletic director for athletic communications. “Even if we have a sellout and everyone buys a beer, it only creates about $4,000 in revenue.”

Sodexo worked with the city to adjust the arena’s liquor license for public consumption. Previously, alcohol was served exclusively in the Shivers Courtside Club, which can fit about 300 people but does not have views to the game.

As part of the decision, a few alcohol-free sections remain at Knapp Center, including the student section closest to the floor. The legal age for buying a beer is 21, so most students cannot partake in the new offering.

Drake is organizing ride programs with ride-hailing companies Uber and Lyft for beer-drinking fans to get home safely and has created a speaker series on campus tied to programming for responsible drinking, Hardin said.

“It was months in the making,” Hardin said. “It wasn’t a decision that I was going to make in a vacuum, nor did I have the authority to do that. But I wanted to make sure that we had partners on campus that were willing to go down this path, and fortunately, we were able to get this done.”

At this point, it’s unclear whether Drake will eventually expand public beer sales to Drake Stadium, home to the school’s football team and the Drake Relays, held every April for the past 108 years.

“We wouldn’t look to add it for the Relays,” Hardin said. “It’s a different animal in itself. It includes thousands of Iowa high school athletes and we would have to have serious conversations with the [two state high school associations]. Football, potentially, but right now our focus is solely on Knapp Center and basketball games.”