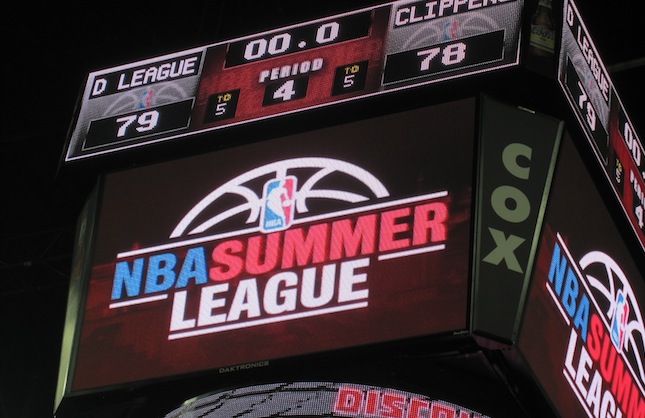 The NBA’s June 30 decision to lock out its players is being felt long before the start of the season.

One year removed from an attendance record-setting event, the NBA was forced to cancel its Summer League in Las Vegas due to uncertainty over the league’s labor agreement expiring July 1. The event that once generated $100,000 per day in tickets sales for the Thomas & Mack Center has been shuttered, leaving the UNLV arena empty during what is normally a busy summer.

Typically the facility generates $300,000 in revenue for the 10-day event, said Daren Libonati, a booking consultant for Thomas & Mack Center, which had the option of booking an alternative event, but chose to keep the dates free with a new deal still in the realm of possibility. “We held out as long as we could,” Libonati said. “(The cancellation date) didn’t give us enough time to create new content.”

Libonati said his group did not begin selling tickets for the Summer League knowing they could become a casualty of the league’s labor situation. In the mean time, they began searching for other revenue to limit overall losses. “We had a Plan A and Plan B,” he said. “Even though we lost those July dates, we found an MMA event to try to make up for losing the Summer League.”

The losses for Thomas & Mack Center may not end at the cancellation of the Summer League. The arena has sold tickets for their Oct. 15 NBA event, an exhibition game between the Sacramento Kings and Los Angeles Lakers. “We are very nervous,” Libonati said. “It’s just going to be another difficult loss if the NBA doesn’t come through.”

If a deal is struck during the early days of summer, the Summer League could take place between either Aug. 12-21 or Aug. 19-28. In that case, Libonati said, Thomas & Mack Center would not be able to host.

The genesis of the NBA Summer League stems back to a conversation backstage at a Phish concert. A group of businessmen led by sports agent Warren LeGaire came up with a simple concept: Give NBA fans a chance to view young players before they are stars; give teams the opportunity to scout the next wave; and give the NBA a chance to keep its product relevant during the off-season.

The Summer League launched in 2004 on the University of Nevada-Las Vegas campus at the Thomas & Mack Center and Cox Pavilion with six teams – Boston, Cleveland, Denver, Orlando, Phoenix and Washington – playing 13 games each. By 2010, the project had turned into a 16-team, 50-game event with more than 40,000 fans attending.

The increase in popularity brought more household names to Las Vegas. Over the past several years, No.1 NBA draft picks Blake Griffin and Greg Oden gave fans a sneak preview into things to come. With the growth and more well-known players, the Summer League has been able to net significant contracts with sponsors – including name sponsor EA Sports – and garner additional revenue created by a $14.99-per-viewer fee to watch a live stream on NBA.com.

On a larger scale, the NBA Summer League offered the Las Vegas economy a mid-summer boost during the slowest months of the year. Las Vegas Events president Pat Christenson, who was the original assistant director of Thomas & Mack Center and later developed the sports marketing department at UNLV, said the event’s impact was becoming more and more noticeable. “It had been growing every year,” he said. “What happened with the Summer League is because of the types of players who are there, rookies and guys trying to make it. We see more and more diehard fans who are looking to come to Vegas and the Summer League is a great reason to do both.”

Christenson said revenue lost by hotels, restaurants and other Vegas attractions isn’t enough to call Summer League’s absence devastating, but the city’s ever-growing image as a hub for basketball will take a significant hit. “We basically owned summer basketball,” he said. “What the Summer League became was more like an NBA conference. It was about the agents, managers, NBA personnel and high-profile players. I mean, LeBron James was here. We will certainly miss that.”

University of California–Irvine professor and author of the NBA Salary Cap FAQ Larry Coon said the NBA had to sacrifice the Summer League as part of their negotiating strategy. “I think it’s like any negotiation,” he said. “(The) starting point is more extreme than the point of your final offer. I think eventually the NBA will have to (make concessions). ”

As Las Vegas and Thomas & Mack Center stew over losses caused by the NBA’s labor strife, the NBA Development League is looking at the possibility of being the only game in town.

The D-League, which drew more than 1 million fans in 2010, will not have its schedule hindered even if the NBA enters a lockout. The 17-team league averages around 3,000 fans per game at about $20 per ticket. They have teams in some small markets such as Erie and Sioux Falls, but many NBA markets such as Salt Lake City, Los Angeles, Tulsa, Dallas and Austin are also represented.

They could also benefit from the possibility of NBA-caliber rookies in need of income joining D-League teams. Rookies who are not yet part of the NBA Players Association would be free to sign with D-League teams that often pay players about $25,000.

Rookies won’t have to make that decision until the end of summer. The NBA and D-League both are scheduled to begin in late November, giving the NBA plenty of time to work on a new collective bargaining agreement.