CHAIRMAN OF THE BOARD 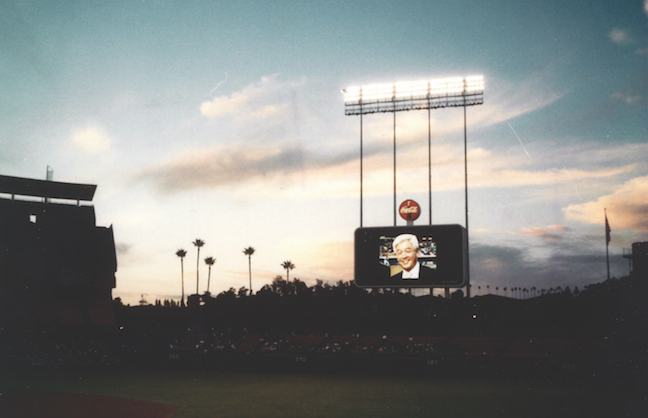 The Diamond Vision board at Dodger Stadium displayed Mikio Matsubayashi’s image when he visited the ballpark in this undated image. (Courtesy Kimberley Matsubayashi)

Mikio Matsubayashi’s obituary is brief and to the point. “He developed many lasting relationships and was highly respected in the sports marketing industry,” reads one passage in the piece, which ran in the Los Angeles Times after Matsubayashi died of cancer Feb. 2 at the age of 79.

That much is true. What most people don’t realize, though, is the critical role he filled in shaping the fan experience. As the exclusive North American distributor for Mitsubishi Electric’s Diamond Vision in the 1980s, Matsubayashi introduced videoboards to sports venues. As a result, he was instrumental in changing the way fans consume live events, starting with the first full-color outdoor display at Dodger Stadium, which made its debut during the 1980 MLB All-Star Game.

Along the way, Matsubayashi, a native of Japan, formed friendships with people from team owners such as Peter O’Malley, George Steinbrenner, Lamar Hunt and Jerry Reinsdorf, to those running the boards, including Paul Kalil, CEO of Van Wagner Sports & Entertainment Productions.

Kalil has worked 35 Super Bowls in video screen production, and he ran the original videoboard at Dodger Stadium. Years later, Kalil started his own business, Big Screen Productions, and he traveled the world with Matsubayashi as more international events embraced the technology.

“Mikio was the father of the video screens and he made a huge impact in sports,” Kalil said. “Anybody could have been the first one. He was the first one. This guy had a corner on the market. He knew everyone, from the NFL to FIFA. He lived the American dream.”

Matsubayashi was a remarkable yet humble man, says Andy Dolich, a former MLB executive involved in buying early Diamond Vision boards. He was among friends and family sharing memories of Matsubayashi in April during a celebration of his life in Marina del Rey, Calif.

Separately, VenuesNow spoke with those who knew him well to put his career in perspective.

Dolich felt obligated to give Matsubayashi the credit he deserves.

“He literally changed the way that people view sports,” said Dolich, the Oakland Athletics’ vice president of business operations from 1980 to ’95. “Anytime I see something like the Cowboys’ [center-hung board at AT&T Stadium], my mind always goes back to Mikio.”

Early in his A’s tenure, Dolich saw Dodger Stadium’s display and met with Matsubayashi to discuss bringing a board to Oakland-Alameda County Coliseum. The A’s eventually bought a Diamond Vision screen after first testing a portable unit at the coliseum. The two remained close friends to the day Matsubayashi died.

“For me as the marketer, from dot racing to (professional cheerleader) Krazy George and the Bash Brothers (Mark McGwire and Jose Canseco), it was as much a part of the engine of our success as anything that we had,” Dolich said. “Plus, you could (replay the action) over and over again.”

For the sporting public, Matsubayashi flew under the radar, but his colleagues knew his role as a pioneer in sports business. He was on par, Dolich said, with Coca-Cola’s Walter Dunn and Chevron’s Jim Gordon, two “go-to guys” for getting deals signed.

Fred Claire spent 30 years with the Los Angeles Dodgers and was their general manager in 1988, the last time they won the World Series. It was under Claire’s leadership that the Dodgers bought the first Diamond Vision board in 1980.

“There is so little known about Mikio, one of the great contributors to venues and sports,” Claire said. “There’s never been anything properly done. But it also speaks volumes about Mikio. He never put himself front and center.”

The story is even more compelling considering his background. Matsubayashi and his family survived the atomic bomb that devastated their hometown of Hiroshima. Three days later, the U.S. dropped a second bomb on Nagasaki, which ultimately led to Japan’s surrender and the end of World War II.

It’s a gripping tale, as recalled in the text of a speech Matsubayashi delivered at the request of a business associate. He spoke in Grinnell, Iowa, in 2011 after a performance of the play “Copenhagen,” a fictional story revolving around two real-life physicists from Germany and Denmark who sat on opposite sides of the war.

“It was a very moving and difficult time for Mikio because he had never spoken in such depth about his experience,” said his wife, Kimberley, who spent 35 years with Mikio after meeting him while working as a flight attendant on a trip from L.A. to New York.

Matsubayashi was 6 years old at the time the bomb dropped on Aug. 6, 1945. He heard B-29 fighter planes overhead and ran outside his house to see them. The next thing he knew, a huge blast knocked him to the ground. His legs were burned below his shorts. The bomb’s epicenter was 2.4 miles from his home and drove the air temperature to a skin-melting 6,000 degrees in the blast, which killed tens of thousands of people.

His legs eventually healed, and life went on. Apart from that speech, Matsubayashi didn’t talk much about the bomb unless someone asked him about it. “He definitely didn’t let it define him,” Kimberley Matsubayashi said.

Matsubayashi first came to the U.S. at the age of 20, traveling over in May 1958 at the invitation of an uncle who lived in California. The two-week journey by ship was the “longest and most memorable trip of my life,” wrote Matsubayashi in his speech. It was the first of many international excursions. Over the years, he traveled 11 million miles by air, most compiled flying between the U.S. and Japan.

Matsubayashi learned English at a school in downtown Los Angeles before graduating in 1962 with an associate of arts degree from Pasadena City College. In college, he got to know Mitsubishi executives through his part-time job as a chauffeur shuttling them to Disneyland. He returned to Japan to work for Mitsubishi-TRW, the firm’s computer group. Five years later, he was hired by electronics manufacturer TEAC. It was during his 12 years at TEAC as its North American distributor that Matsubayashi first made connections in sports, tied to his employer’s corporate sponsorships.

In 1978, Matsubayashi formed his own agency called American Pacific Consultants Group, where he consulted with U.S. and Japanese firms that wanted to do business with each other. One year later, Mitsubishi Electric came to him for advice. It had recently developed a large full-color video screen for outdoor use and needed help marketing the product. Matsubayashi became the firm’s distributor and named the product Diamond Vision, a spin on the word Mitsubishi, which means “three diamonds” in Japanese.

Dodger Stadium became the beta site after Matsubayashi first tried to get Diamond Vision installed at old Yankee Stadium in New York. He knew Dodgers owner Walter O’Malley from his days at TEAC, and it was O’Malley who supported him as the first Asian accepted into the Los Angeles Country Club. O’Malley died in 1979, but work toward putting a Diamond Vision board in Dodger Stadium continued.

Claire recalls making a trip to Japan in early 1980 with the late Bob Smith, the Dodgers’ director of stadium operations, and Barry Stockhammer, who ran the old left-field message board, to see the videoboard before it was installed for the All-Star Game.

“Mikio’s concept was right on target,” Claire said. “It was the start of all the things we see today in these videoboards.”

The famous anecdote is that the Dodgers bought the board for $1 in a deal that allowed Mitsubishi to showcase the technology for other MLB team owners attending the All-Star Game, as well as at Dodgers home games, with the vision of signing more deals for other ballparks. The board itself was valued at $3 million, according to a story at the time published in Popular Science.

The agreement paid off for Mitsubishi Electric, which had developed a new technology using red, green and blue light tubes to form the color spectrum. It was the forerunner of LED screens and an upgrade over the early matrix boards. Globally, the fi rst 38 outdoor videoboards in sports were sold by Matsubayashi and his sales team before Sony, Panasonic and Daktronics established footholds in the market. The list covered Arrowhead Stadium in Kansas City, Mo.; Shea Stadium in New York; Chicago’s Comiskey Park; Seattle’s Kingdome; Texas Stadium in Irving, Texas; and, yes, old Yankee Stadium.

All but Arrowhead no longer exist, but to this day, the White Sox, Cowboys and Yankees all have modern Diamond Vision boards at their stadiums.

“Even though it was an incredibly good deal for us, it was the same for Mitsubishi,” Claire said. “To be able to show others how the board worked at Dodger Stadium and how pleased we were with it … that was exactly what they wanted.”

As more ballparks adopted videoboards in the early 1980s, the NFL took notice. Jim Steeg, the NFL’s former senior vice president of special events, hired Matsubayashi as a consultant to help install temporary videoboards for the Super Bowl over a period of 10 years, starting with the 1983 game at Rose Bowl Stadium. Back then, the NFL did not allow teams to display any type of game action at their facilities. But that all changed after NFL Commissioner Pete Rozelle approved the use of videoboards for the Super Bowl after the players’ strike cut nine weeks off the 1982 regular season.

Bringing the technology to the NFL championship was a key piece of Rozelle’s strategy to “blow it out of the water and do the best we can at this game to show that we’re back,” Steeg said. Just as the board at Dodger Stadium had done, the Super Bowl’s first videoboard in Pasadena caught the attention of the league’s team owners.

“Within a year after doing it at the Rose Bowl, there were probably eight (videoboards) up at NFL stadiums,” Steeg said. “We lit the fi re and everybody saw it. The relationships we developed helped change the way we watched sports inside stadiums. That’s the bottom line.”

Kalil was part of those early Super Bowl installations before working with Matsubayashi on video screen production for the FIFA World Cup after he left Mitsubishi in the late 1980s. Kalil experienced firsthand how Matsubayashi sold those multimillion-dollar products while spearheading a trend worldwide.

“The interesting thing about Mikio is he was the type of person who wouldn’t necessarily take no for an answer,” Kalil said. “It’s not like selling a widget. This is a substantial commitment. It’s not just a video screen, it’s the architecture and the timing. In many ways, you’re changing the look of a stadium. His ability to help people understand the value of video screens was really well before his time.”

Steeg agrees. “He was always a hustler,” he said, laughing. “You come up with ideas once in a while and have no idea how to execute them, and then you run into somebody like Mikio that knows how to execute. That’s the thing. He could figure it out. I miss him a lot.”