Charlie Daniels: Have Band, Will Travel 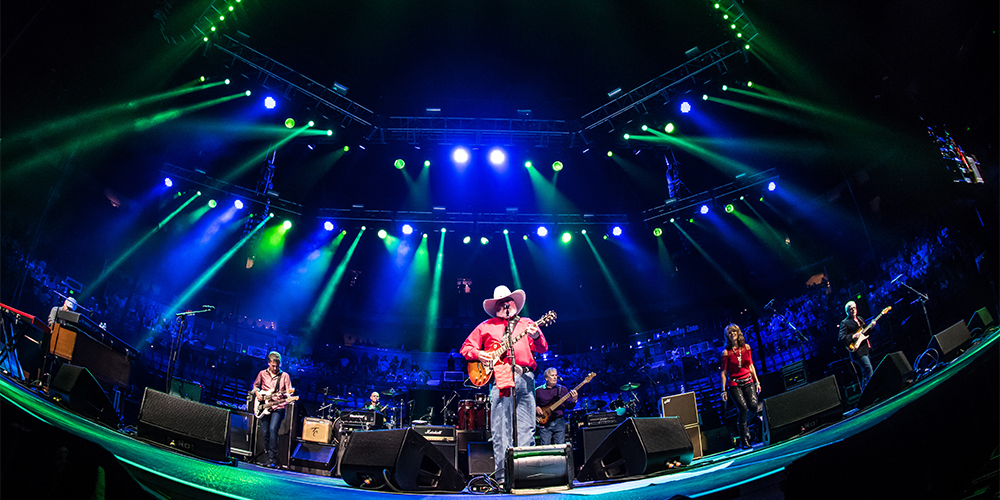 From dives to palaces and back home again, Charlie Daniels made friends just about everywhere in more than 60 years of touring

Charlie Daniels hesitated as he boarded the DC-3 at the Moline, Ill., airport. It was in the mid-1980s and Bebe Evans, his longtime tour coordinator, had booked a propeller plane to take the Charlie Daniels Band to play major fairs across central and western Canada.

At the time, money was a little tight, said Evans, a 41-year employee with Corlew Music Group, the band’s management firm. She thought chartering an older plane would best fit their budget to get to Canada from the Quad Cities, where the band had played Davenport, Iowa.

Band members eyed the aircraft warily as their bus approached the tarmac. 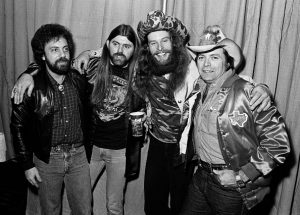 “Charlie never complained about anything as far as touring,” Evans said. “He played some of the worst (dives) in the world and had been on buses and cars and Winnebagos that broke down. He got on that DC-3 and said, ‘Is this thing safe?’ I told him it will land anywhere.”

It’s just one of many colorful stories folks have shared about Charlie Daniels, a road warrior for over 60 years. Daniels was 83 when he died July 6, but his death still came as a shock to his family, friends and music industry colleagues.

Before Daniels died, the band was expected to hit the road again in 2021 for rescheduled dates with the Marshall Tucker Band and a touring rendition of Volunteer Jam, the all-star show Charlie Daniels developed in Nashville.

“Charlie was bigger than life, and I always thought he was going to be there,” said concert promoter Dave Snowden, who worked with the artist over 55 years. “That’s what he meant to everybody he came in contact with. There was nobody better. He treated everybody with respect.”

Over his career, Daniels played every venue imaginable around the globe and for nearly every kind of audience. In 1969, during the height of the Vietnam War, he performed at a demonstration in Washington, D.C. Decades later, he entertained U.S. troops overseas in Iraq, Cuba, Kuwait, Soouth Korea, Germany and Bosnia.

Daniels performed a solo set on the USS Theodore Roosevelt, an aircraft carrier, in the Adriatic Sea. In Jerusalem, he played with a symphony orchestra. In Hong Kong, he performed a well-paid private gig for a bunch of high rollers. 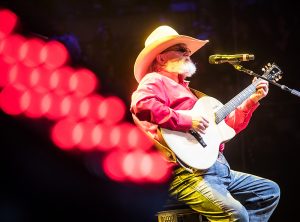 In Australia, where his band performed in 1998, Charlie Daniels first met Keith Urban. The up-and-coming country artist opened for the band and played its big hit “The Devil Went Down to Georgia” in tribute. Urban had his sights set on the U.S. and Daniels told him to “look us up,” Evans said. Four years later, Urban opened for them at Taste of Chicago on his way to becoming a huge star.

Daniels performed abroad early in his career. Many years before he formed the band, Daniels and “Taz” DiGregorio, his longtime friend and keyboard player who died in 2011, were in a group that spent a few months playing bars in Greenland, according to Evans.

Nobody knows those early years better than Snowden, CEO of Triangle Talent. He first started booking Charlie Daniels in the mid-1960s at outposts such as Club 68 in Lebanon, Ky. Daniels would drive from Nashville to neighboring states to perform at small regional venues.

The two initially crossed paths when Daniels recorded some music at a studio in Louisville where the company now known as Triangle Talent was formed. Bluegrass legend Bill Monroe was among the notable artists that recorded there. Daniels, at the time a struggling musician, worked out a deal to cut some demos at the studio.

“Charlie paid some money but he owed about $3,000,” Snowden said. “My partners wrote it off. Then about 30 years ago, somebody called the studio number and said ‘Mr. Daniels wants to pay his debt.’ They told them they didn’t have anything on the books. The story goes that Charlie sent them a check.”

Triangle Talent would go on to promote dozens of Charlie Daniels Band dates, many at state fairs. The Kentucky State Fair in Louisville, a Triangle account, was among the band’s favorite venues, Evans said.

In 2010, the group played historic Ellis Island, tied to a convention for the Texas Roadhouse restaurant chain, a key client for Triangle Talent. The island in New York, where thousands of U.S. immigrants arrived in the early 20th century, is now part of the National Park System. 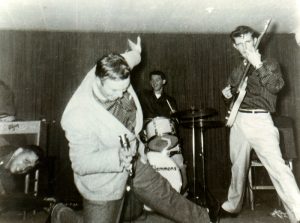 Before the performance, Snowden was informed that park rangers would have to inspect the band’s tour trucks and buses as part of their security protocol. Along with having a bomb-sniffing dog go through the vehicles, the rangers made the crew empty all their equipment on the roadway, something Snowden didn’t expect. He got angry.

“I’m raising seven kinds of hell and everything else,” Snowden said. “I’m worried about when Charlie gets there. We told him what’s going on. When he gets off the bus, he talks to the park rangers, shakes their hands, signs some autographs and drives off. That’s Charlie Daniels.”

Bob Skoney can relate. Skoney ran Nashville Municipal Auditorium for 42 years before retiring in 2019. He played a key role putting on Volunteer Jam in the 1970s and ’80s, when it grew into a major production. The Charlie Daniels Band would rent the 9,700-seat arena for a week of rehearsals and set up a big cocktail party for the music industry.  Municipal played host to nine Volunteer Jams 1977-85.

The show itself was a marathon. Volunteer Jam ran for about seven hours, from 6:30 p.m. to 1:30 a.m. There was a live video feed with a big screen, Skoney said, which was a bit cutting edge in those days.

Iconic performers such as James Brown, Ted Nugent, Crystal Gayle, Billy Joel, Papa John Creach and Dickey Betts would show up to jam with Charlie Daniels, along with fellow Corlew Music Group acts such as Dobie Gray and Wet Willie. Other notable stars would show up unannounced and jump on stage to perform, Skoney said.

“It was always a first-class show,” he said. “Charlie was a no BS person. You could take it from him that it would go on as scheduled.” 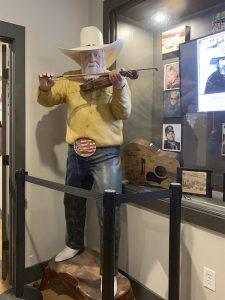 BIGGER THAN LIFE: A life-size wood carving of Charlie Daniels at Indian Ranch in Webster, Mass., where his band has played 28 times. (Courtesy Suzette Raun/Indian Ranch)

Well, most of the time anyway. It was a struggle to get James Brown off stage after he threw his cape off, Skoney said, which was part of a routine for the Godfather of Soul. Retelling that story always draws laughs from those in attendance, he said.

One year, someone started lighting fireworks inside the arena during Volunteer Jam. Daniels stopped the show and told the audience, “We’re here to listen to the music. We don’t want to hear any of that,” Skoney said. “He took control of the situation.”

Back then, Volunteer Jam was typically held the second weekend of January, and some years the weather didn’t cooperate. One year, one of Tennessee’s infamous ice storms put the concert in doubt. Daniels saved the day, picking up his band in his four-wheel-drive truck. The show went on, although many ticket holders couldn’t make it because of the precarious conditions, Skoney said.

In 1986, Volunteer Jam relocated to Starwood Amphitheatre as a summer event and moved to Bridgestone Arena in 2015 for its 40th anniversary show. David Kells, senior vice president of entertainment and marketing for the arena and the Nashville Predators, worked the 1999 event at Starwood. He was in his 20s, a young marketing coordinator working at the venue.

“It was not just a concert for Tennessee; it had international stars,” Kells said. “Over time, it evolved into a tour to celebrate all that Charlie Daniels built. He was a fixture in Nashville. He played those early T.J. Martell Foundation benefits. The first one was Michael Jackson and Charlie Daniels. That’s the level we’re talking about.”

The Fox Theatre in Atlanta was another of Daniels’ favorite venues. The Charlie Daniels Band performed eight shows there dating to 1976, including a sold-out three-night run in 2018 in support of Alabama’s 50th anniversary tour.

Those concerts with Alabama produced some of the highest grosses ever for a country act at the Fox, said Allan Vella, the theater’s president and CEO. At the time, Vella’s right shoulder was in a sling from rotator cuff surgery.  He was standing at stage right when the band finished its set. Daniels walked by, stopped and pointed at Vella and told him he went through the same procedure.

“Charlie said, ‘I feel your pain,’” Vella said. “He started giving me advice on how to follow my physical therapy religiously, what to do and what not to do. It was like talking to your neighbor. He was generous with his recommendations and very concerned and thoughtful. You don’t see that every day. It was a breath of fresh air.”

Charlie Daniels got a kick out of playing places nobody really ever heard of, Evans said.

Some might say Indian Ranch qualifies. The summer resort destination in Webster, Mass., features a 3,000-seat amphitheater among other attractions. The band has played there 28 times since 1989. Those afternoon shows were often capped off by a fresh lobster dinner for the band and crew, owner Suzette Raun said. 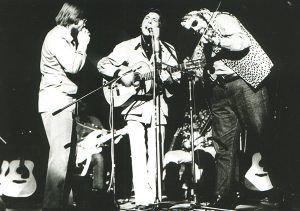 Her family bought the vintage property from the Sadowski family in 2004. The complex, known as “Nashville of the North,” has road signs named for country artists that have played the amphitheater. The main entrance is named Charlie Daniels Way. A life-size carving of Daniels playing the fiddle, outfitted with his signature cowboy hat, blue jeans and giant belt buckle, stands inside Samuel Slater’s restaurant, the resort’s fine dining facility.

“We always felt they were more like family when they drove up,” Raun said.

Jack Sadowski, the previous owner, would always throw a big party for Daniels, Evans said. He paid the band in cash. Concertgoers could bring their own adult beverages, including plenty of Jack Daniels. Indian Ranch would give away barrels as door prizes for patrons to keep their whiskey ice cold.

“It was wild,” Evans said. “It’s on a lake that has about 40 syllables. Jack would cook. We took home a lot of cash every time we went to Indian Ranch. No checks. It was not (manager) David Corlew’s favorite place.”

This year, the Charlie Daniels Band concert at Indian Ranch would have marked the venue’s 75th anniversary, Raun said. This year’s shows were canceled because of the pandemic.

“It would have been a big celebration and having him here would have been an anchor of our performances,” she said. “So many people would make it a special day, to picnic and tailgate. Charlie Daniels was the one concert of the year they were sure to come see. He was such a great performer and (exuded) so much history.”