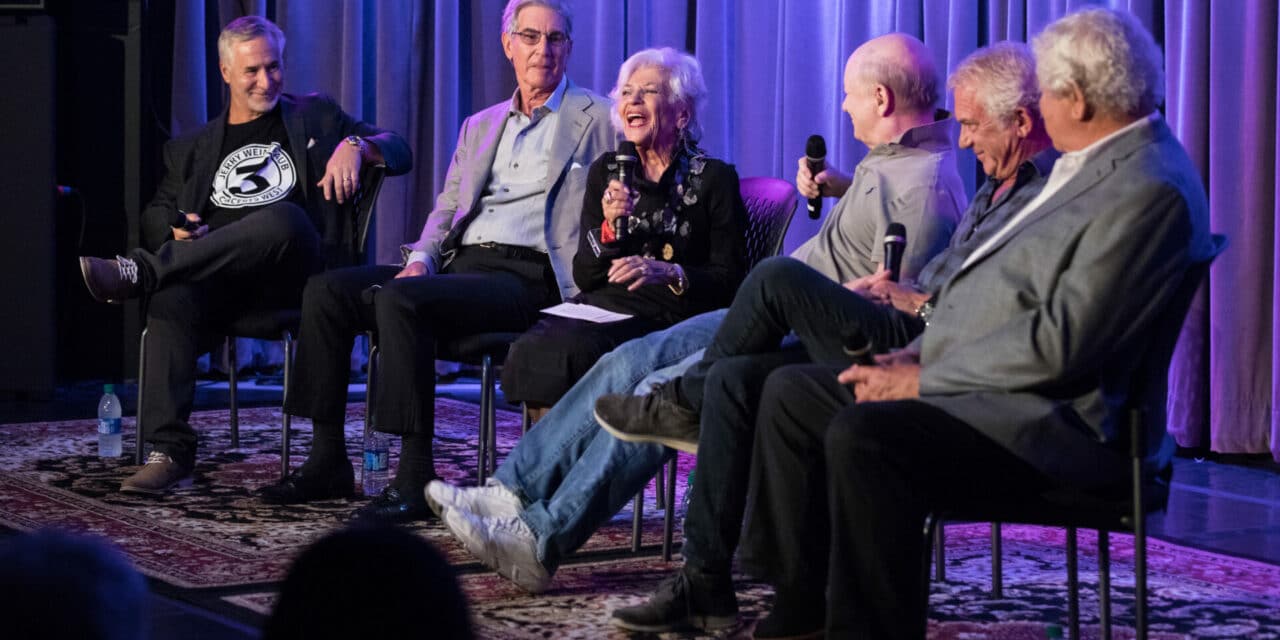 AT THE FORUM: Claire Rothman, center, speaks on a panel in 2019, tied to an exhibit at the Grammy Museum honoring filmmaker and talent manager Jerry Weintraub. (Getty Images)

Claire Rothman, a pioneer among women in venue management, is back in the spotlight, 27 years after she retired as president and general manager of the Forum in Inglewood, California.

Two new digital streaming productions featuring the Los Angeles Lakers’ “Showtime” era at the vintage arena include Rothman as a major player. During her run at the Forum from 1975-95, the Lakers won five NBA championships.

The first project, a 10-part series titled “Winning Time: The Rise of the Lakers Dynasty,” debuts Sunday on HBO Max and will also be broadcast on the network’s cable channel.

Later this year, a nine-part documentary on the Lakers, produced by team owner Jeanie Buss and filmmaker Antoine Fuqua, will stream on Hulu. No release date has been announced.

Buss’ father, Dr. Jerry Buss, owned the Lakers from 1979 until his death in 2013. At one time, he also owned the NHL Kings and the Forum after purchasing all three assets from Jack Kent Cooke.

Initially, Rothman has given a thumbs-up to the documentary and mostly a thumbs-down to the HBO series, which is based off the 2014 book about the Lakers’ dynasty written by former Sports Illustrated writer Jeff Pearlman.

For the record, Rothman and Jeanie Buss were not involved in any way with “Winning Time.”

HBO “consulted with Jeanie Buss and sent her the first episode as it was written at that time,” Rothman said. “She didn’t much care for the treatment they did of Dr. Buss. When I read the script, I didn’t like what they had to say about me. It said that I unbuttoned two or three buttons of my blouse before I met Jerry Buss. I now understand that it has been changed.”

By comparison, Rothman was interviewed for 3.5 hours for the documentary.

“I’m very anxious to see both of them, because any publicity can be good publicity,” she said.

Three years ago, Rothman moved from Los Angeles to Las Vegas with her husband, Edwin Hill, a retired ophthalmologist. She’s still spry at age 93 and her husband is 91. They’ve been together for 38 years. Her daughter and oldest grandson live in Vegas as well.

The couple had a “good arrangement” at their apartment complex during the pandemic, Rothman said. They got to know some other residents and met together on the grounds outside the complex for lunch and dinner. They also got exercise walking at a nearby park.

“We got outdoors a lot,” she said. “It kept us from going nuts.”

“I’m hopeful now that COVID is going down,” she said. “We still wear masks when we go out in public. We want to go out and do things because we’re used to being active.”

It’s a trait Rothman honed during her many years in arena management, starting with the old Spectrum in 1967. She started as a bookkeeper shortly after the Philadelphia arena opened. Within two weeks, she was promoted to business manager and talent buyer.

Rothman remembers the day in February 1968 that part of the Spectrum roof blew off during a powerful wind storm. The arena closed for a month until the roof was repaired.

“We had the Ice Capades for a matinee,” Rothman said. “The orchestra played ‘off we go into the wild blue yonder’ as people exited the building. I became an expert in returning money. Ice Capades did three shows on Saturday and two on Sunday, plus singles during the week. A lot of money had to be refunded.”

After a short stint running a theme park in Orlando, Florida, Rothman moved to Ohio to help open the old Richfield Coliseum in 1974, the NBA Cleveland Cavaliers’ home court for 20 years.

One year later, Cooke hired Rothman to run the Forum. In the late 1970s, Rothman introduced Buss to Cooke, who was looking to sell the Lakers and Kings.

At the time, Buss owned a World Team Tennis team that played at the old LA Sports Arena. Rothman called Buss and arranged a lunch date with Cooke to negotiate a deal for Buss to move the tennis team to the Forum and buy the Lakers, Kings and the arena.

The $68 million purchase extended to Cooke’s 13,000-acre ranch in the Sierra Nevada Mountains. Forty-three years ago, it stood as the biggest deal in sports history.

Rothman officially became an employee of the old Ogden Entertainment, which ran the Forum’s concessions before taking over arena management after Buss acquired the teams and the building.

She got to know Jack Nicholson, famed actor and rabid Lakers fan, pretty well. “Mercurial,” is how Rothman best described him.

Apart from the Lakers’ title runs, Rothman remembers the Rolling Stones’ 1975 Tour of the Americas concert. which took place at the Forum shortly after Rothman started working at the arena. The Stones had a giant lotus-shaped stage in which Mick Jagger appeared as the flower unfolded. Due to its massive size, Madison Square Garden and the Forum, both designed by the same architect, Charles Luckman, were among the only venues able to accommodate the setup, according to Rothman.

“We had everything at the Forum,” she said. “It was magical.”

After leaving the Forum, Rothman spent four years with Ticketmaster before retiring a second time in 1999.

As a Las Vegas resident, Rothman has seen the most recent explosion of growth in the city’s sports and entertainment landscape. She predicts the NBA will eventually put a team in Sin City, which depends a great deal on the tourism market.

“The (NHL) Golden Knights have been able to draw sellout crowds and the (NFL) Raiders are doing well,” she said. “We have a (triple-A) baseball team that’s very well attended and it looks like we’re getting an MLS team. There are really two cities here. When you live here, you don’t go to the Strip that often. Those are the people that work 9 to 5 and are part of a devoted audience.”