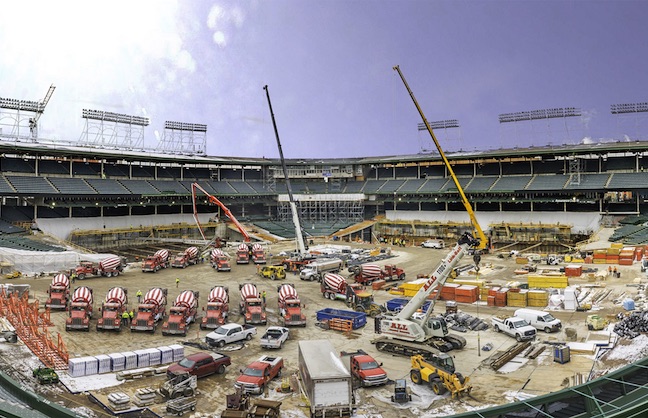 The end is in sight for the massive overhaul of Wrigley Field, the Chicago Cubs’ 105-year-old ballpark.

Four years after the first phase of renovations began with the rebuilding of the bleachers and the installation of a videoboard in left field, Major League Baseball’s Cubs are nearing the finish line, having updated virtually every part of the park. This offseason focuses on the construction of three new premium clubs and completing renovations for the park’s 60 suites.

The current work, called Phase 5, is part of the overall 1060 Project, named after Wrigley Field’s address, 1060 W. Addison St. Over time, it has evolved from a $300 million project into a total investment of $760 million, all privately funded by the Ricketts family, which has owned the Cubs since 2009.

“We knew that Wrigley needed some love,” said Cubs Chairman Tom Ricketts. “There’s literally been decades of deferred maintenance. No one had really ever gone in and touched the infrastructure. We knew it would be a big project. It was bigger than we expected, but we knew we had to preserve it for the next generation.”

The renovation plans go back almost 10 years, soon after the Rickettses bought the Cubs for $900 million. It has been close to 20 years since the Cubs, then owned by Tribune Co., first talked about major upgrades outside Wrigley Field, which evolved into Gallagher Way plaza and a six-story office building containing the Cubs’ administration and a team store, plus retail shops, bars and restaurants.

A bartender serves drinks at the American Airlines 1914 Club, which opened at Wrigley Field in 2018. (Steve Green / Chicago Cubs)

Those improvements opened over the past few years. Across the street, Hotel Zachary, named for Wrigley Field’s original architect, Zachary Taylor Davis, opened in 2018. It was developed by Hickory Street Capital, the Rickettses’ real estate group, in a partnership with Starwood Hotels. The hotel, plaza and office building are separate from the $760 million spent inside the park. All told, it adds up to about $1 billion in private development for the ballpark and the Wrigleyville neighborhood.

Phase 5 is a $140 million investment, matching last year’s work to build the American Airlines 1914 Club behind home plate, among other upgrades. That’s according to Tim Romani, CEO of CAA Icon, owner’s representative for the 1060 Project.

Three new clubs on the way
The work is key for the Cubs to keep a competitive team on the field and maintain the historic ballpark. The three new clubs, situated along the first and third baselines and in the upper deck behind home plate, join the American Airlines 1914 Club and the six bunker suites that sell for $1 million a season that opened in 2018.

“It’s absolutely critical. That [incremental] revenue is very important to the team,” Ricketts said. “The number of dollars and resources we can give to our baseball guys … the more we have, the better. Not only does it improve the fan experience but hopefully the team as well.”

The mezzanine suites, tucked under the upper deck, are going through a complete makeover for the first time since 1989. Thirty years ago, the retrofit was driven in part by the Cubs playing host to the 1990 MLB All-Star Game, to accommodate the league’s dignitaries and sponsors.

The Cubs are busy renewing suite leases, and the 40 full-season agreements have been extended, said Andy Blackburn, vice president of new business for Marquee Sports & Entertainment, a Cubs subsidiary.

A handful of partial season packages remain to renew, Blackburn said. Suites are priced at $135,000 to $275,000 a season and carry five-, seven- and nine-year terms. The suites have 12 to 15 fixed seats depending on location.

Suite holders will see a dramatic transformation come April 8, when the Cubs’ regular-season home opener is scheduled against Pittsburgh. New elevators in left and right field come online this season to transport suite holders from those entrances as well as the VIP entrance at the main gate that opened for the 2018 season. It’s a big improvement over the series of ramps and staircases that people once had to navigate to reach the mezzanine level, Blackburn said.

The suite retrofit was a tight squeeze in a vintage ballpark, but those units now extend a few feet deeper after the old outdoor corridor leading to the suites was pushed back and enclosed. The new covered walkway has new restrooms, plus kitchens and pantries, vastly upgrading and streamlining the process for Levy, the Cubs’ concessionaire, to deliver food to the suites. The frozen treats served from Levy’s famed dessert cart, for example, will no longer melt from the heat and humidity of a typical Chicago summer before they reach the suites, said Andy Lansing, the vendor’s president and CEO.

“We’re treating it as if Wrigley Field never had suites before, as if it’s a brand-new experience for our guests, and in one sense it will be,” Lansing said. “The environment has completely changed with a much higher level of hospitality. Our chefs did incredible things in the past with limited space, and now that we’ve given them more and bigger ‘sand boxes,’ they’re able to play a whole new game.”

The old suite interiors were mostly drywall and white paint with some historical Cubs photos. Now, they feature exposed brick walls and fresh branding tied to the Cubs and firms holding the suites. There are more televisions. Fixed windows fronting the suites have been replaced with floor-to-ceiling sliding glass doors that open to the field, said Adam Stover, a principal and senior interior designer with Populous, the project architect.

“It’s one connected experience for the fans,” Stover said. “They’re closer to the action while not being separated from the interior and exterior space.”

New layout for suites
The suites’ new open feel extends to the concert experience at Wrigley Field. The Cubs have been aggressive in booking concerts, which are exempt from MLB’s formulas that dictate the sharing of revenue among clubs, and last year they celebrated the 50th show on the field over the past 15 years. The new suite layout provides better views and a stronger connection to live music for those patrons, Blackburn said. As part of their deals, suite holders get first rights to buy concert tickets. The mezzanine suites and clubs all have padded seats.

The Cubs’ market research, conducted by The Seurat Group, showed that the suites’ proximity to the field in a smaller ballpark was a key factor in companies’ decision to buy, which influenced Populous’ redesign, he said.

“What kept popping up (in surveys) and what differentiates these suites from anything else in the marketplace is the outdoor seating,” Blackburn said. “People love the ability to sit outside while at the same time taking advantage of having a private indoor space. It became pretty clear that we should make them as open to the elements as we can.”

The W Club (top) and the Maker’s Mark Barrel Room, shown in renderings, are along the baselines. (Populous X2)

The two new clubs along the baselines, the W Club (third base), named for the W flag flown at Wrigley Field after home wins, and the Maker’s Mark Barrel Room (first base) are underground on the same level as the American Airlines 1914 Club and underwent

the same construction sequence. At the end of the 2017 season, Pepper Construction, the Cubs’ general contractor, removed about 40,000 tons of sand and soil to dig the holes for the baseline clubs before going back in this offseason to finish building those spaces, said Scott Higgins, Pepper’s senior vice president.

The W Club and Maker’s Mark Barrel Room are both tied to about 250 seats in the bowl and are smaller than the American Airlines 1914 Club, which accommodates about 600 season-ticket holders.

The all-inclusive ticket prices for the two new clubs and the Catalina Club in the upper deck run roughly $200 to $500 a game depending on the club and seat location. Food and drink, including alcohol, is folded into the ticket price. The Maker’s Mark Barrel Room and Catalina Club are sold out and a few seats remain to be sold for the W Club, Blackburn said.

The team’s research showed that fans sitting behind the Cubs’ dugout along the third baseline are die-hards who love the history of the team and all things Wrigley, Blackburn said. As a result, patrons of the W Club, which is on that side of the field, get an exclusive view of the Cubs’ batting cages from the 4,600-square-foot lounge, he said.

Inside the 4,100-square-foot barrel room, the Maker’s Mark brand is subtly reinforced through the single red chairs at every four-top table, providing a nod to the red wax topping every bottle of the Kentucky bourbon. The club’s televisions all display in black and white, in keeping with the Chicago speakeasy theme, Stover said.

In the upper deck, the 3,900-square-foot Catalina Club connects to about 400 seats. The design and finishes are more casual compared with the three subterranean clubs, but those patrons have access to a large outdoor deck behind the lounge overlooking the corner of Clark and Addison.

Fans sitting in the upper deck tend to be older season-ticket holders dating to before the Cubs became a national draw on cable superstation WGN in the 1980s. They appreciate the history behind the space, Blackburn said.

“As we looked at the research of who likes to sit up there and what the Cubs’ history of that era really means, we were standing in the space and there was this moment where we looked out toward Lake Michigan and a tiny sailboat went across the horizon,” Blackburn said. “We all looked at each other said, ‘This is the Catalina Club.’”

For now, anyway. The Cubs are marketing naming rights for both the Catalina and W clubs, Blackburn said.

The Catalina link dates to Cubs spring training from the 1920s to the early 1950s held at Catalina Island off the California coast. William Wrigley Jr., who owned the Cubs at that time, bought the island in 1919 and shipped the team to Catalina on vessels from the Wilmington Transportation Co., which he also purchased. Wilmington flew a flag with the letter W on its ships, a tradition that eventually migrated east to Wrigley Field, as reported by the Chicago Tribune. The Cubs fly a W flag from the manually operated scoreboard in center field after every home victory.

Catalina Club theming includes the nautical alphabet with letters spelling out Cubs, Stover said. It’s among the storylines connecting fans to those three decades of spring training on Catalina Island, which is now largely a vacation resort destination.

“It seems absurd that we would have a nautical-themed club space at Wrigley Field, but there are so many signs within the ballpark that kind of point back to that that history,” Blackburn said. “The flagpoles in center field were built to represent the mast of a ship. This club is built for the fans that love everything about the traditions and the perspective that space provides.”

Ricketts confirmed the Cubs have some more plans on the drawing board for redeveloping the old Audi Club and the DraftKings Fantasy Sports Zone bar, both in the right-field corner. The blueprints call for a potential 15,000-square-foot club, Higgins said. To this point, CAA Icon has not been assigned future projects, Romani said.

“I give the Ricketts family (and Cubs executives) Crane Kenney and Carl Rice an incredible amount of credit,” he said. “The renovations were bold and not inexpensive, but they were committed to preserving Wrigley Field and doing it with historic reverence.”