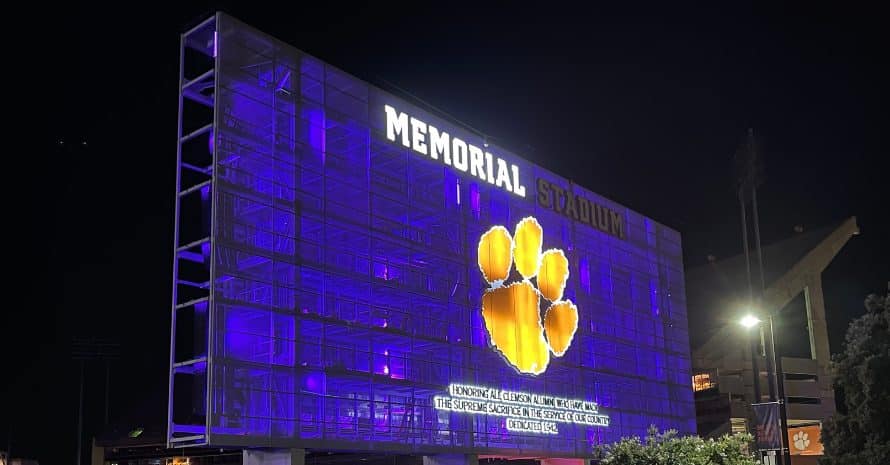 PURPLE HAZE: The new videoboard at Clemson’s Memorial Stadium features a dynamic lighting display on the back of the structure, a cutting-edge design element. (Eric Sabin)

The Daktronics board, a $10 million investment, debuts Saturday (Sept. 10) for Clemson’s 2022 home opener against Furman.

Dubbed “Dabotron” after Clemson football coach Dabo Swinney, the board spans more than 7,000 square feet. It sits in the stadium’s east end zone, above the hill where Clemson’s team takes the field. The new board vaults the ACC school from 83rd in college football to eighth in terms of total screen space, said Eric Sabin, associate athletic director of facilities management and capital projects.

The signature feature is the perforated metal cladding across the back side of the board, embedded with a massive LED light box that can change colors. It’s something new in sports, providing a cool, transparent look into the board’s inner workings, said Michael Rowe, co-founder and CEO of Anthony James Partners, a consultant. AJP helps design dozens of videoboards for colleges and big league teams.

The exterior feature was intentional and an aesthetic element, Sabin said. Clemson officials wanted something different than the typical static facade tied to videoboards for a stadium that sits near student dorms on a street that serves as a main thoroughfare through campus.

In that sense, the location makes sense for the one of the top Power 5 college football programs to showcase the board’s technology beyond the stadium walls, said Jay Parker, Daktronics’ vice president of live events and spectaculars. 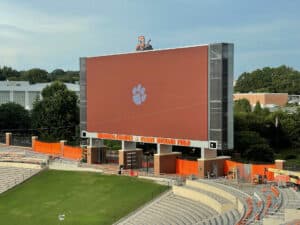 The school has full control of the light presentation, a system separate from the equipment used to run the videoboard. The RGB displays on the exterior, a form of LED tied to architectural accent lighting, can turn purple and orange to match Clemson colors, or for example, go pink to recognize Breast Cancer Awareness month in October, Sabin said.

“We can sync it to music and our introduction video,” he said. “Clemson is known for its team entrance and the team rubbing Howard’s Rock and ‘taking the hill.’ Now, we have dynamic (exterior) lighting as part of the show.”

During the day, the back side has a high-end metallic look, Rowe said. At night, as the lighting picks up, an interior glow materializes, but it’s not overwhelming with an imposing, pulsating light show, he said.

The colors can be “dialed down” to a more subtle tone or turned up for greater brightness, Parker said.

“It’s well done and not over the top,” Rowe said. “They didn’t want it to be a (Times Square) thing. We went through multiple iterations on design and presentation and they vetted each option, going so far as to test all the different perforation sizes to see what was going to be the most efficient and create the best look. This was not a whim; they took their time and did it right.”

The perforated metal design is more expensive than standard paneling, but overall, it’s more of an engineering equation and something that really isn’t cost prohibitive, Rowe said.

“It’s just a planning and design issue,” he said.

The front side of the board facing the seating bowl features an animatronic tiger (Clemson’s mascot) on top of the structure. It lights up, its eyes turn red and tail moves, similar to the old board, Sabin said.

Rowe said Clemson’s board could potentially start a trend as other schools upgrade their video screen technology.

Time will tell. Parker said it all depends on having the right backdrop behind the videoboard to replicate the Clemson model.