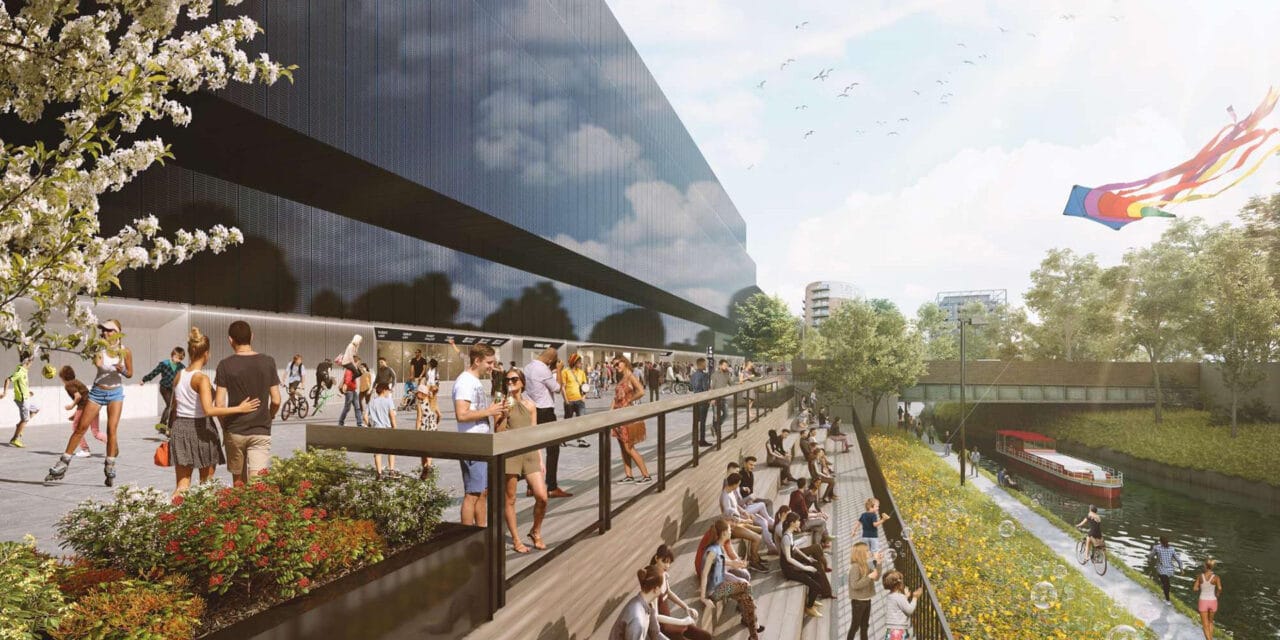 The design of Co-op Live incorporates 30,000 square feet of green space around the arena. (Courtesy OVG)

Lack of gas boilers in Manchester project will cut energy use, carbon emissions

Project developer Oak View Group revealed Monday that Co-op Live would not only be the U.K.’s largest-capacity indoor entertainment venue but also the country’s first running entirely on electricity.

The building has been designed without any gas supply serving the site. It will use electricity for everything, whether it’s air-source heat pumps for heating, domestic hot water, cooling, catering or the LED lighting used throughout.

Gas boilers, commonly used in traditional arenas, are nowhere to be found inside Co-op Live. Rooftop solar panels — more than 95,000 square feet of them — will be used to power day-to-day activity, “with green electricity from the grid topping up capacity for events,” according to the announcement.

The only fossil fuel used in the building relates to backup generators in case there’s a power shortage. Life safety generators are a regulatory requirement.

According to the developers, the design reduces energy use by more than 50% compared with similar arenas, in large part because of the switch away from gas boilers. This represents four times the energy reduction of the building’s previous design using gas boilers for hot water, and the change will significantly improve air quality as well. (OVG is also the owner of VenuesNow.)

The team has worked out that the design will enable a 23% reduction in carbon emissions. It sees Co-op Live on track toward achieving net-zero carbon by 2038, which is the timeline Manchester City Council set for the city to become a zero-carbon city.

Once complete, Co-op Live will recycle 100% of the rainfall on the arena through the installed rainwater harvesting system. This will equate to more than 1.4 million gallons of water annually, covering 24% of the arena’s total water usage. Rainwater will be used to flush toilets and water the green spaces around the arena.

The green spaces created around Co-op Live will equate to 10 tennis courts worth of trees, shrubs, and wildflowers, creating lush habitat for wildlife, according to the company rep.

Co-op Live boasts 32 restaurants, bars and marketplaces. To achieve two of the most ambitious aspects of its sustainability plan — zero waste to landfill, as well as zero food waste — Co-op Live will work with local food donation programs. There will also be a plastic-free plan in place to minimize unnecessary packaging and eliminate single-use plastics, as well as a comprehensive recycling program and free-water refills.

Co-op Live is being constructed on the site of a former coalmine that was active until 1968.

Mark Donnelly, chief operating officer of OVG International, said in a statement in the release: “Climate change is the single largest problem facing the planet today and we take our responsibility in creating a greener world seriously. In Co-op Live, we are building a planet-friendly venue as well as one capable of hosting the world’s best events.”