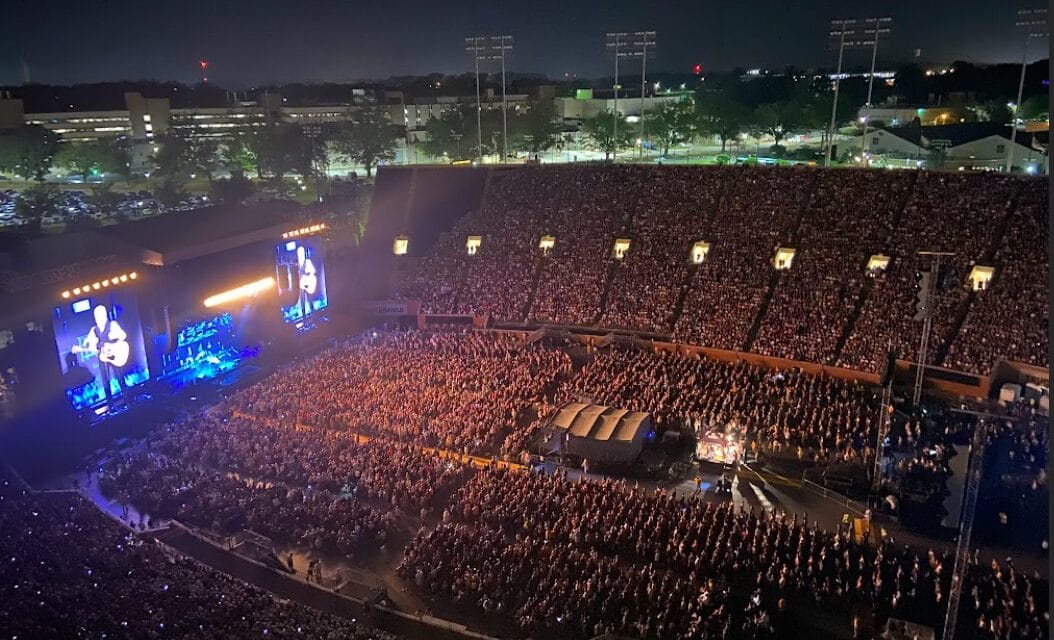 WINSTON-SALEM, N.C. — Paul McCartney did his best to soothe the frayed nerves of wet, damp concertgoers after traffic jams were compounded by a thunderstorm prior to his May 21 show at Wake Forest University.

For the most part, the Beatles legend accomplished that mission at Truist Field, the ACC school’s football stadium. As part of the 2022 “Got Back” tour, McCartney performed for a lengthy two hours and 40 minutes before a crowd of about 33,000.

In a competitive market in the southeast for stadium shows, the event was the third concert in nine years at the stadium after Wake Forest signed a booking agreement with the Greensboro Coliseum Complex in 2013.

Like every other venue across the country, it came more than two years after the shutdown of live entertainment. In a struggling labor market, the re-set has tens of thousands of part-time workers  working live events for the first time.

Winston-Salem was no different, and compared with Charlotte and Raleigh, North Carolina’s two biggest cities, the city of 244,000 rarely hosts mega events, leading to issues with traffic, parking and getting people to the right seats for the concert.

To their credit, Greensboro Coliseum officials, in conjunction with Ticketmaster, sent multiple emails to ticket buyers before the show, alerting them about heavy traffic and to arrive early and be parked by 6 p.m.

As a ticket buyer and knowing from past experience the logistics for stadium shows, my buddy and I left Charlotte at 2 p.m. for the 80-mile drive to Winston-Salem. We stopped to eat lunch at Speedy’s BBQ in Lexington, a small town well known for its Carolina ‘cue. By 4 p.m, we were parked in a lot next to Truist Field. No sweat.

Hundreds of others weren’t so lucky. One couple that got stuck in traffic gridlock near the stadium told local NBC television affiliate WXII they gave up, turned around and went home after spending more than $1,000 for tickets. That’s a tough decision to make.

The only quibble we had was a lack of communication with early arrivers waiting in line at the stadium gates. The doors were delayed for 30 minutes due to lightning in the area. As the rain came down, officials turned the magnetometers off and allowed people to bypass them to gain shelter underneath the brick structure tied to McCreary Tower, built on the west side in 2008 as part of a stadium expansion.

After about 20 minutes, everybody was told to turn around and get back in line to go through the magnetometers for real. Bottom line, we all got wet anyway. After we got through security, the lines stopped again because lightning was still in the area, prohibiting fans from entering the seating bowl. But nobody collectively informed the crowd about the reason for the second holdup and tempers flared with people yelling at folks scanning tickets to let them inside.

Those issues aside, McCartney went on about 8:40 p.m. to accommodate as many late arrivals as possible. The rain stopped by the time the band kicked off with “Can’t Buy Me Love.”

Twelve years ago, I saw McCartney at Spectrum Center (then Time Warner Cable Arena), Charlotte’s NBA arena, and had forgotten about his masterful storytelling abilities between songs. McCartney turns 80 in three weeks, and although the tone of his voice now wavers a bit in concert, kudos to him for still giving us a great show and sharing a boatload of memories over his 60-plus years as a live performer.

Those tales ranged from his anecdote about Jimi Hendrix learning the title track from Sgt. Pepper’s Lonely Hearts Club Band two days after it was released (and paying homage to Hendrix by playing “Foxey Lady” on a guitar adorned with hippy-style graffiti); to the time when Paul hung out at former bandmate George Harrison’s house. They both played ukulele on “Something,” a Beatles tune Harrison wrote. Harrison gave his ukulele to McCartney as a gift and Paul plays the instrument in concert to kick off the song. For me, it was among the highlights of the night.

There were other special moments as well, such as “Blackbird,” with McCartney elevated 20 feet above the stage and bathed in video of a blackbird flying against the night sky; and “I’ve Got a Feeling,” in which John Lennon’s voice and video accompanies McCartney. Peter Jackson, producer of the recent documentary “Get Back,” about rehearsals leading to the Beatles’ famous 1969 rooftop concert in London, was able to isolate Lennon’s vocal from 53 years ago and pair it with McCartney playing live. It was a goosebumps moment.

Truist Field’s capacity of 30,000 for college football is on the smallish side for a Power 5 school. For McCartney, it provided a more intimate setting compared with stadiums on the route with twice the number of seats. Considering it runs closer to a big league arena capacity, those who paid $40 (plus fees) to sit on Deacon Hill, the grass berm in the south end zone facing the stage, had the best seats in the house.

It was also the right fit for OVG Hospitality, the food provider operating its first stadium concert after acquiring Spectra in late 2021, which held the account at Wake Forest.

To kick off its operation, the concessionaire sold a festive cocktail called Strawberry Fields Forever, themed after the Beatles tune. The drink consisted of house made strawberry lemonade, soda water and a double shot of vodka. The cost was $21, an early indication that OVG Hospitality isn’t bashful in keeping up with competitors in aggressive pricing for food and drink.