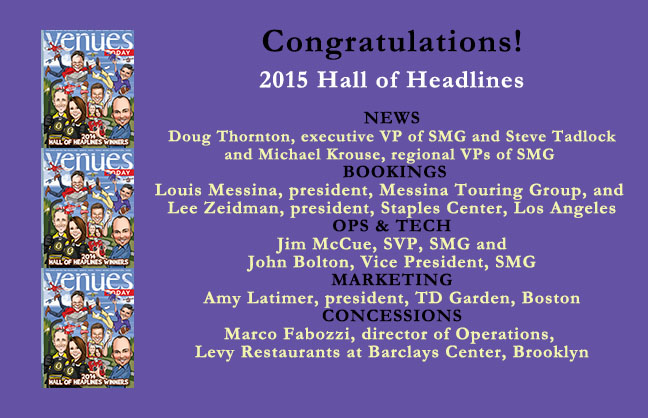 Congratulations to the 2015 Hall of Headlines recipients.  Read about their accomplishments in our  December issue of Venues Today.

Doug Thornton, executive VP of SMG and Steve Tadlock and Michael Krouse, regional VPs of SMG
For leading the effort that resulted in the City of Los Angeles Department of Parks and Recreation awarding the new management contract of the iconic Greek Theatre to SMG. The process to win the award was extremely competitive, followed closely by national media, and took many months to complete.

Louis Messina, president, Messina Touring Group, and Lee Zeidman, president, Staples Center, Los Angeles
For engineering Taylor Swift’s return to Staples Center for five sold-out shows (Aug. 21, 22, 24, 25 and 26). The unprecedented and sold-out five-show run gave Swift the all-time Staples Center record for most sold-out performances by any artist in the 15-year history of the arena, with a total of 16 sold-out concerts. To commemorate the historic achievement, Los Angeles Lakers guard and 5-time NBA Champion Kobe Bryant surprised Swift on stage during her opening-night appearance to congratulate her and announce that a “Championship Banner” to commemorate her record would forever hang from the Staples Center rafters alongside those representing the LA Kings and Los Angeles Lakers championships. Bryant also shared with Swift the fact that her 16 sold-out shows equals the 16 NBA Championships that the Lakers have won.

Amy Latimer, president, TD Garden, Boston
For the launch and execution of ‘Banner Moments,’ an integrated digital/social fan engagement campaign and birthday celebration in conjunction with TD Garden’s 20th anniversary. As part of the birthday bash, Boston sports and entertainment fans were treated to a first-ever half-ice, half-court arena floor setup, including the chance to take a slap-shot on the Bruins ice, shoot a three-pointer on the historic Celtics parquet, and capture once-in-a-lifetime backstage photos. Fans who were not lucky enough to land one of the 5,000 free party invites (that were snapped up in just a few hours) were encouraged to engage online at TDGarden.com/BannerMoments.  By sharing their favorite TD Garden memories via Twitter and Instagram using #BannerMoments, fans had the chance to win tickets and other memorable ‘random acts of access.’ The campaign also included Snapchat integrations and live-streaming of venue surprises via social platform Periscope. In its first week of promotion alone, the arena generated more than 8 million social media impressions for #BannerMoments.

Marco Fabozzi, director of Operations, Levy Restaurants at Barclays Center, Brooklyn
For pioneering the All-Star Taste program, a venue-wide, two-night-only special menu celebrating 2015 NBA All-Star weekend, which held its Friday- and Saturday-night programming at the Brooklyn venue. The program featured a signature dish inspired by each of the 30 NBA teams. Fabozzi and this team also developed the All-Star Taste food truck, which traveled throughout Brooklyn and Manhattan serving samples and generating an astounding amount of press for the venue’s food and beverage program. Fabozzi most recently finalized a partnership with celebrity chef Carla Hall to open a new concession stand within the venue, Carla Hall’s Southern Chicken. Carla is currently one of five co-hosts of ABC’s “The Chew.” Since taking his role at Barclays Center in 2014, Fabozzi has reduced labor and expenses by 10%. Fabozzi also developed customized menus for two recently unveiled premium clubs within the venue, taking into account kitchen locations while maintaining first-class fare.