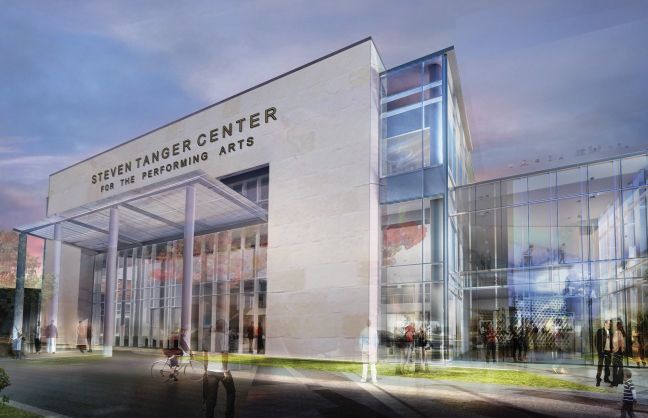 Rendering of the $85 million Steven Tanger Center for the Performing Arts, Greensboro, N.C., which will debut in 2020.

The performing arts center under construction in Greensboro, N.C. should help restore the city's reputation as a consistent provider of Broadway shows and strengthen its overall roster of entertainment venues, project officials say.

The $85 million Steven Tanger Center for the Performing Arts is scheduled to open downtown in January 2020. Construction starts this month on the 3,000-seat venue after initial excavation, grading and utility work was completed in December.

“Where we're building, it has become a niche arts district with a cultural center, library, two parks and other small theaters,” Johnson said.

The center is named for Steven Tanger, president of Tanger Outlets, a company with 43 outlet malls across North America and whose headquarters are in Greensboro. Tanger supplied the lead gift of $7.5 million, which is part of $40.5 million in private donations helping to fund the project. The balance of construction costs are covered by a $4 facility fee for every event ticket sold, parking revenue and $10 million in hotel taxes, Johnson said.

The center effectively replaces the old War Memorial Auditorium, which for 55 years stood on the coliseum grounds, about three miles southwest of downtown. The 2,456-seat venue was demolished in 2015 to clear space for additional parking for the arena complex.

In the1990s and early 2000s, War Memorial booked a highly successful series of Broadway productions with 6,000 subscribers, Johnson said. The old auditorium produced the first North Carolina run of “Rent,” among other tours, he said.

But the combination of an aging venue and the recession effectively killed War Memorial's business, Johnson said. Over the past 10 years, local voters rejected two bond proposals to spend up to $50 million to renovate the building. Instead, a task force determined the best decision would be to build a new performing arts center, financed through a combination of private and public dollars. Tanger's donation led to more private gifts to help pay the final cost of $84.7 million, an increase over the initial $65 million figure.

The Tanger Center has signed a ticketing deal with Ticketmaster, and Spectra, the concessionaire for the coliseum complex, will be its food provider. Daktronics is producing the center's video screens.

Johnson said he's in talks with promoter The Nederlander Organization to bring Broadway tours back to Greensboro. The city has missed out on massive hits such as “The Phantom of the Opera,” “Wicked” and “The Book of Mormon,” but that should all change in two years, he said.

There will be competition from the 2,700-seat Durham Performing Arts Center, which opened in 2008 and is situated about an hour's drive east of Greensboro. But Johnson thinks the venues can co-exist, along with other similar venues across the state.

“We're our own market in the Triad, [apart from] Charlotte and Raleigh,” Johnson said, referring to the central North Carolina region covering Greensboro, Winston-Salem and High Point. “I think we're all big enough to get these shows [separately].”

The Tanger Center will join the a mix of venues in Greensboro that includes the 21,000-seat coliseum, an aquatic center, the 7,000-capacity White Oak Amphitheatre and The Fieldhouse, home of the NBA G League's Swarm.