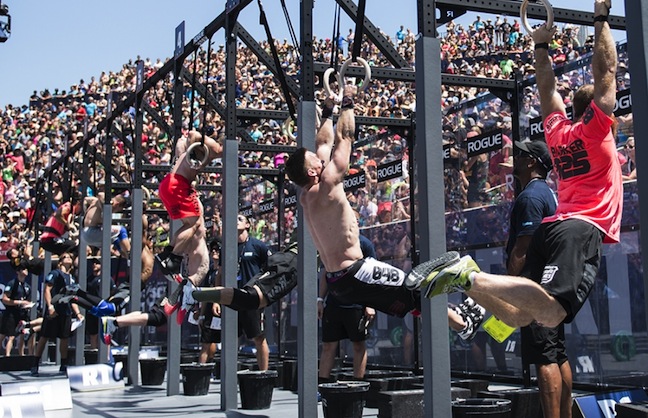 Scenes from the Men's Individual Finals on the last day of the CrossFit Games, July 28, at the StubHub Center in Carson, Calif. (Photo courtesy of CrossFit Games)

The CrossFit Games are known as the forum for the crowning of the world’s fittest man and woman, but after this year’s record run, they might have helped their host site earn a new moniker — world’s fittest venue.

“They literally used the entire campus for this event and really put all of our facilities to the test,” said Katie Pandolfo, GM of StubHub Center in Carson, Calif., which hosted the six-day CrossFit Games July 24-28. Located on the campus of Cal State Dominguez Hills, StubHub Center is a multivenue U.S. Olympic training facility. Pandolfo said that despite the demands made on the facility — three separate, concurrently running events during the three-day finale in front of 50,000 total fans — StubHub Center performed well without any major glitches.

“This was the first time they used the entire campus, but we look at it as a natural progression,” said Pandolfo. “The attendance and popularity continue to grow every year. It’s incredible how many people want to see these events.”

The CrossFit Games are the final leg of a multipronged competition that begins with over 138,000 amateur and professional athletes vying for a spot in one of 17 regional competitions for fittest individual, team and Masters' division (age 40 and up). CrossFit was founded in 2000 by Greg Glassman and has turned into a global movement with over 7,000 gyms operating under the CrossFit moniker (at this time last year there were 4,200 affiliates). The CrossFit Games incorporate the movements and Olympic lifts used at CrossFit gyms to train everyone from amateur exercise enthusiasts to elite athletes and military special forces.

This year’s CrossFit Games marks the fourth time the event has come to the StubHub Center, and the first time the 26,000-person-capacity stadium was used for one of the spectator events.

“The soccer stadium allowed us to get more fans closer to the action,” said Justin Bergh, GM of the CrossFit Games, who brought in Jumbotrons and additional sound for the events.

Also for the first time, the CrossFit Games utilized StubHub Center’s Velodrome for a rowing competition, which had individuals complete a staggering 21-kilometer row on machines. StubHub Center’s track was used for an event called Pullgatory, where Masters competitors had to pull an ultraheavy weighted sled down one-third the length of the field, rotated in between a series of overhead lifts, burpees and sprinting.

The individual and team finals took place in StubHub Center’s 10,000-capacity Tennis Stadium with athletes attempting everything from handstand push-ups to 90-foot walking lunges holding a 160-lb bar over their heads.

“They even had an event where they ran up and down our berm,” said Katie Pandolfo, referring to the large grass area above the stadium’s supporter section.

Capping off the event was a 100-vendor retail village anchored by shoemaker Reebok, who in 2012 ponied up a $1 million purse to serve as the official sponsor of the CrossFit Games. Bergh said the retail village was 10 times the square footage of last year’s more cramped vendor village, and included a 60,000-sq.-ft. beer garden with air conditioning and a Jumbotron with live feeds of competition, along with an additional 10,000 sq. ft. of shaded space.

The CrossFit Games averaged about 15,000-17,000 people per day over the busy weekend portion of the event, although only 10,000 had a Gold Ticket (retailing at $150) which gave them access to the Tennis Stadium and the final events. When the first allotment of tickets — about 6,000 — was put on sale in May, they sold out in 17 minutes.

The CrossFit Games' deal with StubHub Center is a straight rental agreement with a commitment through 2015. The Games are organized and managed by what Bergh describes as a small “skeleton crew” based in Scotts Valley, Calif. CrossFit also produces its own media content, including 13 episodes covering the games, set to be aired in the fall on ESPN. Full live coverage of the games was available on CrossFit’s website, including partial coverage on ESPN2 and ESPN3.

“We’re looking for midrange arenas that are eager to work with us and we are picking our facilities between 10 and 12 months out,” Bergh said, noting that the biggest concern is typically concessions. Many CrossFitters adhere to specialized diets and “food and concessions are very important for us and our health-conscious crowds. We want to ensure that there are plenty of healthy options available and that some of our food vendors also have the chance to participate.”

Bergh said the other large growth vehicle is the CrossFit Open, where any athlete in the world can pay $20 for the chance to qualify for a spot at one of the 17 regional competitions. Over five weeks, CrossFit releases a new competitive workout each Wednesday and athletes attempt to earn a place on a global leaderboard by either videotaping themselves doing the workout, or participating in a CrossFit-affiliated gym. The Open is a big moneymaker for CrossFit — in 2012, over 60,000 competitors participated in the Open and in 2013, over 130,000 athletes registered for the five-week completion.

“We think by next year, we might have a quarter-million people from around the world participate in the Open,” Bergh said.