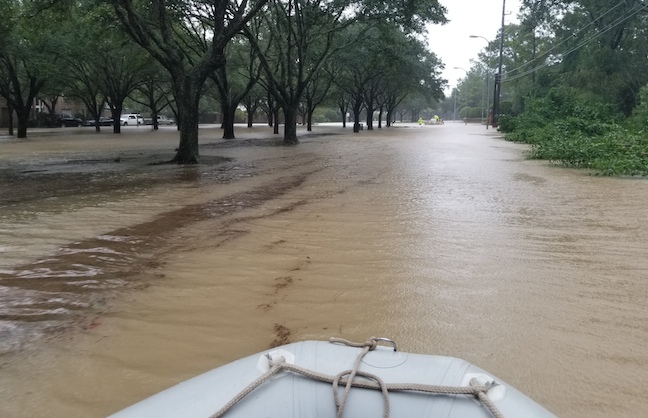 HOUSTON — Aug. 28, 2017, 9:15 a.m. to 2:30 p.m. CST — Among the many heroic stories coming out of Houston during the devastation of Hurricane Harvey is one of our own, Ned Collett of Oak View Group’s Arena Alliance. Collett ended up rescuing six people, two dogs and their essential stuff in a borrowed boat that memorable day in Texas.

In the business for as long as anyone remembers, Collett, who moved to Houston six years ago, was checking on industry friends and family as the flood waters rose around him. Naturally, he called Mike McGee, Barmac Consulting, a longtime friend and former employer with Leisure Management International (LMI), to see how everyone was weathering the storm in his circle.

Over the next several hours a story unfolded that had Collett and his fisherman neighbor, Eric Smith, out in the flood waters on a rescue mission, which Collett admits, off the record, may be one of the most stupid things he’s ever done…but certainly doesn’t regret.

This is his story, told with the expected levity and humor that are uniquely Collett.

IN HIS OWN WORDS

“This is honestly the most heart wrenching thing I’ve ever seen. People are suffering and there’s nothing you can do about it. The other side is everybody is helping everybody. It doesn’t matter what race, gender, creed or national origin. It’s the great common denominator. I’ve been here almost six years and this is the first time we have ever had anything remotely like this.

“And people just help. Obviously downtown Houston has flooded but there are so many suburban communities effected. In my neighborhood, maybe 180 homes, you see people at the school bus stop, at the grocery store, you just get to know people. Somebody will say my sister lives in Kellywood Estates and has a problem, have you got some time? People will just go and help.

“If you look at the rescues that are happening during this hurricane, it’s neighborhood driven.

“The Cajun Navy actually came over, which is really cool. That’s a bunch of guys with boats out of Louisiana. They go in and get people out. It started around Katrina. At the last major flood in Baton Rouge a year ago, they did a lot of rescues.

“This morning I talked to Mike. He lives two miles from me. When I moved to Texas, my wife Ginger called Barbara [McGee] and, next thing I knew, I was living in Katy, Texas, near the McGees. Mike said [his daughter] Melissa is getting a little water, and I said, ‘Let’s go get her.’ My personal rain gauge is at 39.6 inches since Saturday and it’s still raining. Noon to 2 on Sunday afternoon it stopped and then it started again. It was horrible.

“After the release of that reservoir last night, I slept with one eye open on the couch. [Son] Ethan and Ginger were in the bed. I didn’t let them go upstairs in case of a tornado. I went to bed about 5. About 8 a.m. the phone was ringing. Ginger is Facebooking with Jane [McGee’s youngest daughter], Melissa and Barbara – they call it a girls’ club, Mike and I call it a hen party. Ginger says Melissa is on Facebook and says she’s about to flood; the water on the street is waist deep. That happened overnight. So I called McGee again and said we’ve got to go get her. He said, ‘How are you supposed to do that, Nedly?’ I said, ‘As long as I’m talking to you I can’t figure it out.’

“Ginger is great friends in the neighborhood with Sharon Smith, and I know her husband is a big fisherman. So I called Eric and said do you have any kind of boat? And he said yes, two. So I said can I borrow the inflatable. They moved here a year ago from New Mexico. Rain is something they freak out about.

“He said what’s going on? I said good friends, really like family, are trapped down about two miles from here. I’ve got to go get ‘em. He said okay, come on around. So I got my pickup truck and put the inflatable, boat motor and gas can in and we got to the end of our street and it was already flooded. We fired up the boat right there.

Demonstrating true Texas chivlry and good cheer, Eric Scott navigates with Ned Collett aboard as they make there way down Fry Street to rescue neighbors Melissa and Scott Zimmerman.

“It took an hour and a half to navigate down there. Melissa was texting me, Scott [Zimmerman, her husband] was waiting out on the bank of this big bayou that had turned into a river. We go get Melissa, Scott and the kids and put them in the boat with Eric and Eric took them out to dry land. Then he came back to get me and their stuff.

“In the meantime, Melissa’s elderly neighbors across the street were in deep shit, too. I said, ‘look, we’re here, get your stuff.’ We put the lady in the boat and her husband, and their stuff. Eric leaves again, drops her off. I’m sitting there…I didn’t even wear a rain jacket. When Eric got back, we loaded the cargo and gear. Got off the bayou and up the street – Fry Road – it was waist deep easy. Melissa and Scott were resourceful. There were people with big trucks and tractors driving people to higher ground. So Melissa texts me, ‘we got a ride, take care of our neighbors, our stuff if you can.’ We did that. We got in the water at 9:15 and got done at 2:30.

“We got six people, two dogs and their stuff. Melissa texted me one of her neighbors was pregnant. Lived catercorner to her house. I tried but she never answered the door. She was already gone, upstairs, or didn’t want to answer the door with the crazed, soaked rat knocking.

“When we pulled up behind the old couple’s house, he was standing there waving. The first thing the man said was ‘Are you with the Cajun Navy? Aren’t you from Louisiana like Melissa’s dad?’ I said, ‘No, I’m with LMI. Louisiana Mafia Inc.

“Where I am, remarkably, my neighborhood is fine. I feel guilty, literally. I’ve got a Dodge pick up truck like all good Texans. I’ve got the boat ready, in the garage.

“The outpouring from people in our business is also remarkable– I’d say more than 30 building managers have called. Even Rob Franklin (retired, from Miami Arena) reached out to me from Argentina. He calls me Neddy. He says I can’t do anything but I wanted to lend you moral support.

“Those are the calls, when you’re sitting here watching water rise and there’s nothing you can do about it, it gives you a great feeling. People are thinking about you.

“We just measure rain in colors now. We were brown rain Saturday and Sunday; red rain Sunday night and most of today; right now we’re on the line — yellow and green. By 10 p.m. tomorrow, it will be out of Houston and on to Louisiana.

“In the last hour and a half, my rain gauge went up by half an inch, which means we’re at the end on this side.”