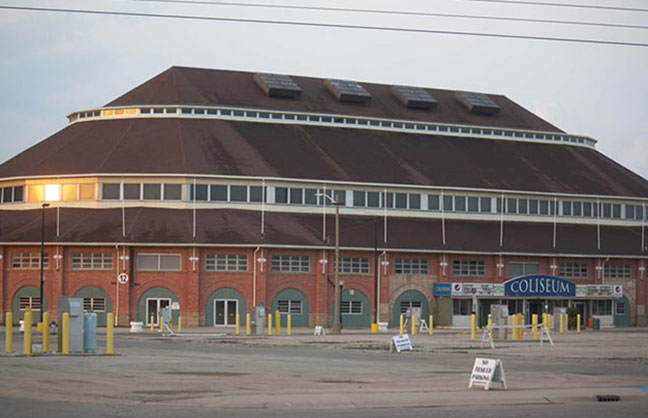 The Coliseum, built in 1901, is one of several buildings at the Illinois State Fairgrounds in need of repair. The estimated cost is $3.7 million.

A nonprofit foundation formed two years ago to raise money to fix deteriorating buildings on the 120-year-old Illinois State Fairgrounds has raised $50,000. It's a tidy sum, but not nearly enough.

According to a 2016 report by Hillsboro, Ill.-based architectural firm Hurst-Rosche, it would cost $3.7 million to repair the buildings, including the 2,688-seat Coliseum, where horse shows traditionally were held. The Coliseum, built in 1901, has been close since 2016

The state-funded fairgrounds has 170 buildings and sits on 360 acres in unincorporated Sangamon County, just north of the state capital of Springfield. Residents and businesses are upset with the lack of funding for the facilities, Illinois Fairgrounds Foundation Board Chair John Slayton said.

“I think they're upset with the deplorable conditions that the fairgrounds are in,” he said. “The fairgrounds have been ignored by the state for years and years.”

Two funding options are now on the table. One is for the foundation to sell naming rights for four of the fairground buildings, including the Coliseum, for $1 million apiece, he said. The other is for the city of Springfield to annex the fairgrounds so the venue can receive city sales tax dollars – something Springfield Mayor Jim Langfelder is working toward.

Slayton says one option is far more likely to happen than the other. “We're deep into conversations with two entities on establishing naming rights,” he said.

“The annexation issue has come up every two or three or four years. The mayor will bring it up. The city has major deficits, so I don't see it happening,” Slayton said.

Rebecca Clark, Illinois Department of Agriculture communications manager, also has seen different Springfield mayors work to annex the fairgrounds, all of them unsuccessfully.

“We go through this every year at budget time,” she said.

A one-mile racetrack, 13,000-seat grandstands and four indoor arenas also are on the fairgrounds. The horse shows that traditionally were held in the Coliseum have moved to an outdoor covered arena next door, Slayton said.

“I think most people would prefer to have the Coliseum for horse shows,” he said. Attendance trends for the horse shows was unavailable.

An economic impact study conducted by the University of Illinois showed that the 11 days of the Illinois State Fair contributes $86 million in business volume to the local economy, including $35 million for wages and salaries, according to Clark.

“The fair itself also generates more than $2 million in state sales tax revenue,” she said.

Those figures are down from the 700,000 that attended roughly 10 years ago, according to Slayton.