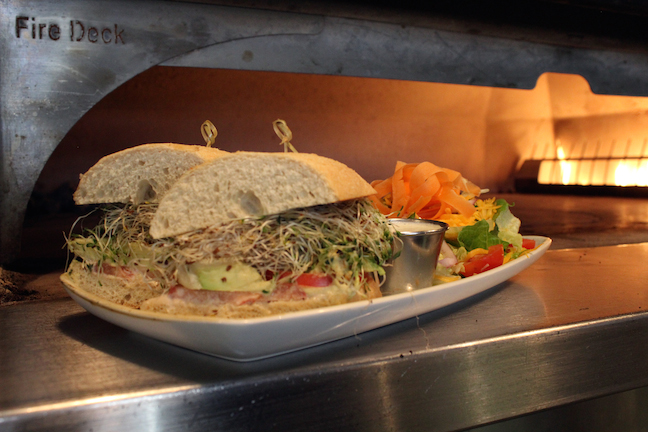 On the outer edge of the PPL Center, a coal-fired oven burns as the sole piece of cooking equipment inside a new restaurant. It churns out hot wings, breadsticks, bacon, grilled cheese sandwiches and other delicacies as patrons sip from 99 choices of craft beer and whiskey.
“It was challenging at first,” said Holly Ahart, Spectra Food Services & Hospitality chef at the PPL Center, Allentown, Pa. She had to be creative and flexible in developing the menu for the new restaurant, which took the place of a coal-fired pizza concept called Crust last fall. Now highlighting the selection of 70 bottled and canned craft beers, plus 29 bourbons, scotches and whiskeys, 99 Bottles incorporates the beer and spirits in many of its dishes.
The chicken and sprout sandwich is a menu highlight—a simple yet delicious snack that Ahart developed to bolster the restaurant’s sandwich offerings. “We marinate chicken breast in a gose beer from Anderson Valley [Brewing Co.],” Ahart said. “It’s a sour beer that has lime and sea salt flavors.”
The beer imparts a citrusy, salty flavor on the chicken breast before the meat makes it into the coal-fired oven for cooking. Ahart then lays it atop a ciabatta roll spread with balsamic aiolim, also dressing the sandwich with tomatoes, avocado and melted provolone cheese.
Ahart recommends guests pair the sandwich with the same beer that the chicken was marinated in, but for those looking for something different, there are 98 other tastes from which to choose.

Chef Holly Ahart oozes enthusiasm when talking about 99 Bottles at the PPL Center. The restaurant opened in October 2016 as a new experience for both the venue’s guests and Ahart. “I worked for Applebee’s for 14 years,” she explained. “I learned so much from working at a corporation and needed to branch out — create my own food items and menus, hire my own staff. … I even picked out the plates and glassware here. It’s been amazing.”
Ahart is excited to introduce diners to the modern gastropub, which she says is a different concept for the Allentown area. “We have a great selection of rotating beer and spirits to keep people coming back, to keep people on their toes,” she said, adding that the culinary team will also look at switching up the food menu come summer.
Along with playing with food day in and day out, Ahart pointed to the staff as her favorite part of her job. “My style is laid back,” she said. “I like interacting with the staff and having fun with them. I honestly love going to work every day.”