Hatfield Creates Her Own Structure 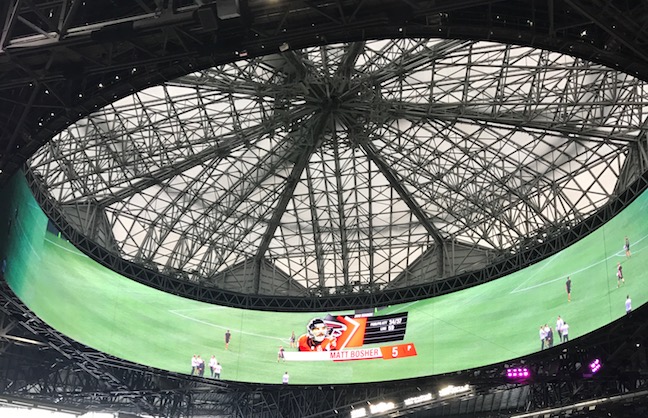 Erleen Hatfield was part of the design team that developed Atlanta’s Mercedes-Benz Stadium and its innovative retractable roof.

Structural engineer Erleen Hatfield has launched her own consultancy with a focus on sports projects.

New York-based Hatfield Group, for which she is managing partner, has six employees, including Chris Lamberth, a former vice president and marketing principal at HOK.

Hatfield has 27 years of experience in structural engineering. At BuroHappold, her most recent employer, she was part of the design team developing Mercedes-Benz Stadium, the $1.5 billion home of the NFL’s Atlanta Falcons, which opened last year.

Other projects on which she has worked include Barclays Center, Ford Field, McLane Stadium, Pinnacle Bank Arena and CHI Health Center Omaha.

Now Hatfield is starting her own business, something she’s wanted to do since she was a student at the University of Nebraska. Hatfield Group will compete against BuroHappold for sports work as well as Thornton Tomasetti and Walter P Moore, two of the bigger structural engineering firms that work on arenas and stadiums.

In addition to Lamberth, Hatfield hired Martin Finio, an architect with 20 years of experience. Finio’s role is to serve as a liaison between the architects and the engineers to make sure things work properly in the design process. It’s a different approach, according to Hatfield.

“Engineering firms hire engineers,” she said. “Architecture firms hire architects and occasionally they’ll have engineers to help coordinate and translate what the engineers are doing. I’ve taken the opposite approach. I’ve got an architect on board not to do architecture but to make sure we’re interpreting the architectural vision correctly.”

Hatfield and Finio have both taught at the Yale School of Architecture over the past 15 years, and together they hope to apply some of the same principles they discuss there. One course, for example, Systems Integration, integrates engineering formulas into design projects.

“We have all these Yale architecture students with grand ideas, and we would actually make them work [by inserting] the appropriate engineering codes and make them realistic,” Hatfield said. “The idea is to try and do this in real life — take the skill set and synergy that we’ve created working together on projects over the years and provide that same service to architects creating real buildings.”

It’s one feature Hatfield hopes will help her new firm gain a competitive edge. In addition, Hatfield, one of the few women working in the sports engineering field, plans to pursue certification as a Women Business Enterprise in the states in which her company does business. Many sports facility developments are publicly funded and require a percentage of firms owned by minorities and women to work on those projects.

“I’m hoping that will help unlock a few things,” Hatfield said. “All the certifications are different. In New York state, you must wait a year to be eligible. Pretty much everywhere else, you can apply immediately. You have to prove that a woman owns 51 percent of the company and then file a massive amount of paperwork. It gets a little bit easier after you get a couple (certifications) under your belt.”

“What’s more important than size is to have a firm that makes a difference,” she said. “I want to do something different, have fun and do great work, especially in the sports world because it affects so many people.”