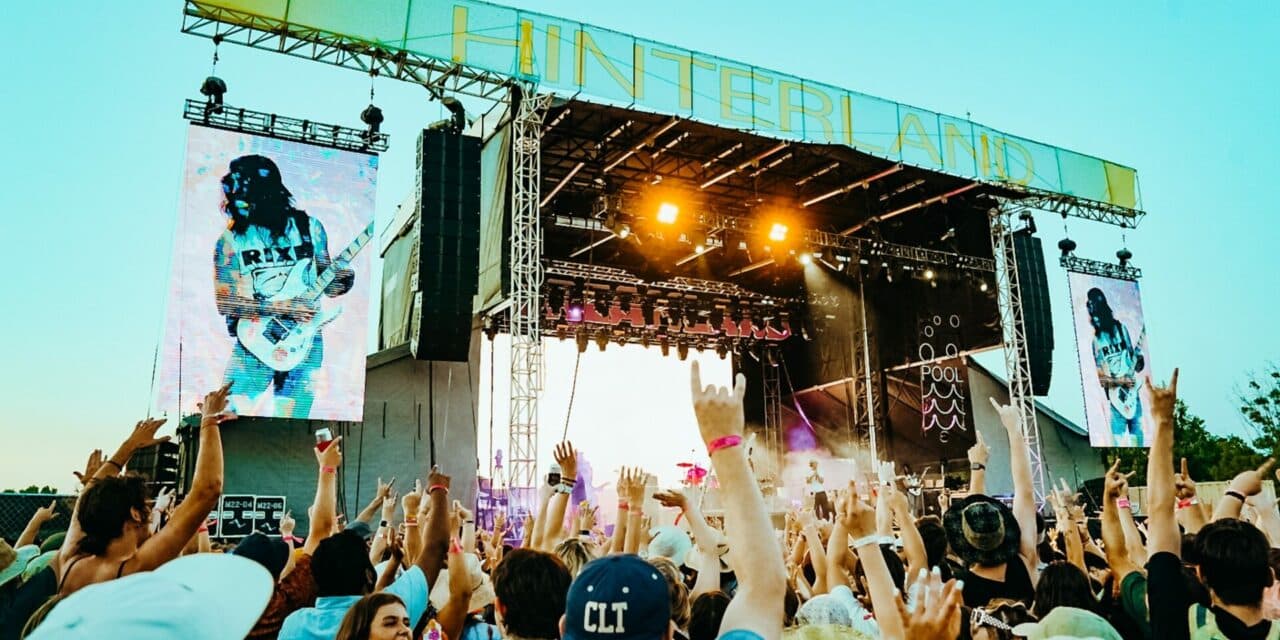 TURN IT UP: Turnstile, a Baltimore metal/punk band, gets heads banging in the crowd during their Friday, Aug. 5 set at Hinterland. (Alyssa Leicht)

The seventh version of Hinterland took place Aug. 4-7 at Avenue of the Saints Amphitheater, a natural valley setting in this tiny burg of 700 residents. St. Charles is a 30-minute drive south of Des Moines, not far from the bucolic Bridges of Madison County and the John Wayne Birthplace Museum in Winterset.

The heat at Hinterland was as intense as the climate depicted in those classic John Wayne westerns. Hinterland sold tickets to a level where daily crowds of 12,000 to 14,000 were expected, event promoter Sam Summers said prior to the sweltering weekend.

Headliners were Billy Strings, Glass Animals, Nathaniel Rateliff and Phoebe Bridgers. There was great variety to the lineup, with metal/punk (Turnstile), Memphis-style R&B (Miko Marks) and Kurt Vile & the Violators (alternative) thrown into the mix of Americana, folk and bluegrass acts.

Eight groups, including Glass Animals, made their Iowa debuts at Hinterland.

On Thursday, West Virginia singer-songwriter Sierra Ferrell, among the festival highlights, swapped sit-ins with Billy Strings, the heir apparent to the jam band throne. The two performed together on Ferrell’s 2021 album, “Long Time Coming.” Summers said he enjoys booking artists that are friends with each other.

For the first time, Hinterland brought comedy to the festival. Comedians Joe Pera and Tim Heidecker, who’s also a musician, were booked for late night sets at the secondary Campfire Stage. It’s all part of Summers’ strategy for evolving the festival in a non-traditional way.

“Mainly, it’s just what I’m listening to and what I like,” he said. “As long as no one has my Spotify login, there won’t be a similar festival. We want to be confident in the bands we book. Everybody playing this festival was intentional; nobody was thrown in because I needed to do a favor.”

The weather didn’t do anybody a favor, no surprise given it’s August in Iowa.

Heat advisory warnings with temperatures ultimately reaching the mid-90s greeted attendees on Saturday. There’s not much shade on site except for the large oak tree in the middle of the amphitheater, which staff dubbed “Hintertree” in year one.  Spots underneath that tree were the first to fill up shortly after the gates opened.

As a result of the heat, festival officials allowed patrons to bring two bottles of water through the gates, regardless of size, instead of one bottle. They also increased the number of hoses at water stations for people to refill their containers after lines ran deep on Friday. (Boxed Water, the festival’s official water sold in recycled containers shaped like milk cartons, sold for $3).

Those changes made mid-stream fell in line with focus on putting greater resources behind the planning of Hinterland as the event expanded to four days for the first time since it started in 2015. 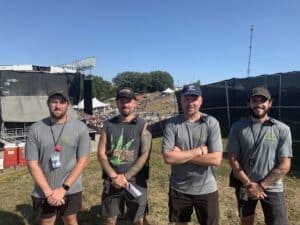 Summers filled two new positions as part of that initiative.

They were supported by Madison County Emergency Services, which is back on its feet after a tornado tore through Winterset in March, killing seven people. The festival property is distributed across two counties, Madison and Warren, and some services were consolidated into one operation handled by a department of public safety trailer taking 911 dispatches.

Off duty police officers from Des Moines and neighboring Indianola were part of the security crew.

“We planned that this year would be challenging,” Summers said. “That’s why we increased it to four days. The build for this stuff is obscene, and with post-COVID supply chain issues, you can plan on everything being 25% to 30% higher when locking in prices.”

Summers would not talk specifically about this year’s expenses, but he gave one example of skyrocketing costs creating a domino effect across the entertainment industry. One band’s agent told Summers it cost $32,000 to ship 25 guitars by truck from Ottawa, Ontario, to Des Moines, an astronomical cost compared to before the pandemic.

“When we put offers in for a lot of these bands for this year, we were paying market rate, but the prices have gone up for next year as bands realize how expensive it is to tour,” he said. “Next year will be more challenging. Everybody is doing the math and finding out that they can’t take these guarantees anymore for festivals. We’re going to have to raise ticket prices for these artists.” 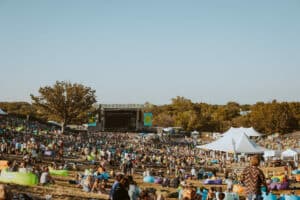 LONE TREE: With a heat advisory in place, shade was at a premium during the Hinterland festival. (Madison Kim-Poppen)

Still, Summers feels he’s in a good spot for 2023. Next year’s Hinterland is 84% booked after he got a jump on securing early commitments because he knows what’s coming over the next 12 months.

“There will be enough (newer) festivals that don’t go well and don’t return that will help adjust that number back to where it needs to be for next year,” he said. “We don’t put any tickets on sale before we release our full lineup. No blind on-sales. We want people at the festival that are there because they know exactly what they’re buying.”

It’s a policy that Summers was able to keep mostly intact after the 2020 festival was canceled due to the pandemic. With two exceptions, he was able to “pick up” most of that year’s lineup and put it in place for 2021. There was one change in headliners. The Avett Brothers replaced Of Monsters and Men, a strong tradeoff.

It was a model for rescheduling dates that hadn’t really been done before, especially in the festival space with so many moving parts. Hinterland has a small enough lineup, with about two dozen acts historically, that Summers was able to get it done.

The intent was to run Hinterland at half capacity in 2021, but as more festivals announced they were going to full capacity later in the year, Summers opened up ticket sales again four months later, with daily crowds running 15,000 for three days. It helped that the 2021 lineup announcement coincided with the same week Americans received stimulus checks.

“It sold out immediately and became our biggest year,” he said. “For 2020, we had sold maybe 2,000 tickets in February, but people were getting nervous at that point. The full shutdown was in March. We offered refunds or they could roll it over to next year.”

All told, Hinterland has proven to be the right size for Iowa, which works for Summers, a Des Moines-area native. He initially leased 30 acres for the festival and later bought land adjacent to the site as the event expanded over the past seven years. Farmers are his neighbors and partners and help out as needed to help produce Hinterland.

“We’re not a big company that has to show growth to shareholders,” he said. “Most everybody came back from last year to work and we tend to use the same vendors. People love this festival.”