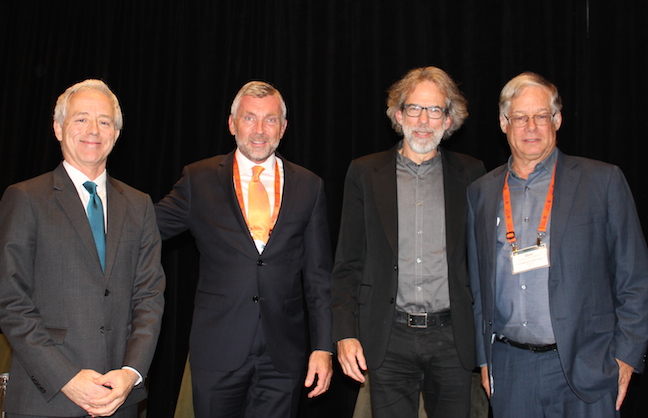 REPORTING FROM VANCOUVER — Convention center staff came together here, Oct. 2-4, for the International Association of Venue Manager’s International Convention Center Conference, where panelists looked at Vancouver’s efforts to improve sustainability and what convention centers can learn from their neighbors in the great north.

Five years ago the City of Vancouver created the Vancouver 2020 initiative with the goal to be the greenest city in the world by 2020.

Already, the city is making strides. The amount of green jobs in Vancouver has increased 19 percent since 2010. The goal for public transit use was 50 percent by 2010 and, according to Deputy City Manager Sadhu Johnson, the citizens of Vancouver are already using alternative or green modes of transportation for trips within the city 44 percent of the time.

But what does this mean for conventions?

“We need to make sure the needs of visitors and residents are closely aligned,” said Vallee, who added that there are now more than 130 certifications available relating to sustainability. Mostly, Vancouver Convention Centre and the city’s commitment to sustainability reinforces what makes the city unique, which is important to potential visitors and groups.

“The only way forward for a destination to differentiate itself is to simply be itself — be authentic,” said Vallee.

One way the city of Vancouver has differentiated itself is with the LEED Platinum-certified West building expansion at Vancouver Convention Centre.

Instead of thinking of it as a building, Mark Reddington of LMN Architects in Seattle suggested that attendees consider the facility a “holistically integrated economical ecologic organism.”

The $740-million expansion tripled the capacity at Vancouver Convention Centre, all while diverting 83 percent of construction waste.

Ken Cretney, president and CEO of BC Pavilion Corporation, which runs the convention center, said, “sustainability is really a built-in component of this building.”

He added that the facility has three levels of success, literally. First, there’s the restored marine habitat built into the foundation of the building, including restoration of 200 feet of shoreline and 1,500 feet of marine habitat that supports a historic salmon migration path. The facility’s heating and cooling system is also supported using seawater. Next, the facility itself is made from local B.C. wood products and has a recycling program that recycles nearly 400,000 pounds of waste each year. To top it all off, a six-acre living roof adorns the facility, supporting nearly 240,000 bees.

Throughout the building’s existence, BC Pavilion Corp. has expanded its use of the center’s sustainable efforts in marketing.

“Sustainability was still somewhat of a vague value proposition even five-to-10 years ago,” said Cretney, adding that early marketing for the facility focused on its other features like aesthetics and location. As buzz around the center’s green efforts increased, the marketing sifted to reflect that, resulting in several media opportunities including national news broadcasts and the opportunity to be featured on shows like “The Amazing Race.”

In addition to sustainable initiatives and focusing on what makes your destination authentic and different, Canadian convention centers also show the benefit of working together and attracting geographically diverse clients.

Executive Director of Convention Centres of Canada Rod Cameron said that the consortium consists of 19 major Canadian convention centers that represent a $2.5-billion economic impact each year. The consortium has existed for about a decade, formed by the realization that “we are our own best resource for information.”

Still, he said there is an inherent tension when competitors all get into a room to discuss operational details and financials, but “the benefits of cooperation outweigh any tension.”

Working together gives Canadian convention centers a critical mass in messaging and the ability to act together to do country-specific research and create a collective impact.

“We knew we needed comparability if we were going to get credibility,” Cameron said, showing the importance of establishing benchmarks.

Another lesson from Canadian convention centers developed out of necessity, but later became a benefit.

Cameron explained that because Canadian facilities didn’t have the resources to really compete with buildings in the U.S. to go after many American events, the focus has not only been continental but also international for about 15 years.

“We have had to be much more diversified,” added Cameron, with several international conferences booked at Canadian convention centers each year along with regional and local events. The strategy to not rely on business within the continent paid off during the economic downturn, when facilities focused on national business suffered and Canada’s convention center calendars remained strong, thanks, in part, to their international clientele.

Whether an association or consortium, use groups to build relationships with your peers.

“These organizations are such a great vehicle for building relationships,” said Cameron. “Knowing I have colleagues at other convention centers that I can call on for help or advice, if the group did nothing else, that would still be a big benefit.”

About 250 attendees made it to this year’s ICCC. IAVM Meetings Manager Bill Jenkins said the organization had expected attendance might drop because of the decision to go international, but the number was on par with last year’s figures, showing the popularity of Vancouver as a destination.