In Wake of Astroworld Deaths, Troubling Questions for All 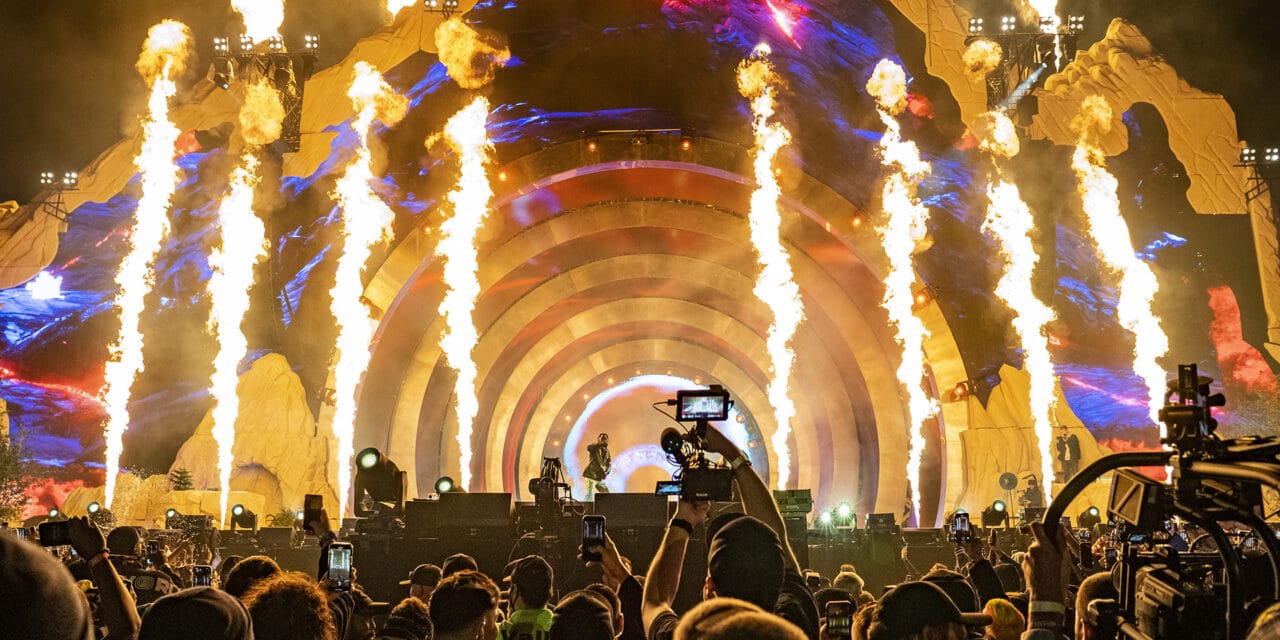 HOUSTON TRAGEDY: Nine people were killed and scores injured when the crowd surged during a performance by Travis Scott at his Astroworld festival Nov. 5 at NRG Park. (Getty Images)

As investigation continues into causes of surge, venue and security execs reevaluate their own crowd control plans

The Astroworld music festival tragedy in Houston in which nine people were killed during a massive crowd surge has venue managers reassessing their operational risk and some questioning whether potential staff shortages may have played a role in the deadly mayhem at NRG Park.

“We all put together comprehensive plans and strategies to succeed in creating the perfect event,” said Daren Libonati, president of Libonati Entertainment Group. “The one thing nobody has mastered is the management of behavior, no matter how much we prepare for it.”

On Nov. 5, the first day of the planned two-day hip-hop festival, an estimated 50,000 people jammed a parking lot at the multi-facility complex for the show headlined by Travis Scott, a recording artist and Houston native.

Scott launched the event in 2018 and named it for the old AstroWorld amusement park at the site of the festival.

The nostalgic feel for the theme park faded quickly on that Friday night in early November after a crowd surge toward the gigantic stage resulted in the deaths of nine concertgoers whose ages ran from 14 to 27.

A few hundred others were hospitalized with injuries, according to local reports.

The event’s second day was canceled.

As of presstime, Houston law enforcement officials were in the midst of investigating the tragedy and its cause.

Live Nation and Texas-based ScoreMore were the promoters and have pledged to cooperate with authorities in their investigation. The promoters are offering full refunds to Astroworld attendees, in addition to providing mental health counseling and setting up a health fund to assist victims with medical expenses.

All three firms, as well as Travis Scott and Drake, the Canadian artist who joined Scott on stage late in the event, are the subject of several lawsuits filed on behalf of the deceased and those injured at the event.

Doug Thornton, ASM Global’s executive vice president of arenas and stadiums, did not return an email for comment.

At the 2019 Astroworld festival at NRG Park, three people were hospitalized after being trampled entering the event. Incidents at Travis Scott productions involving gate-crashers and moshpit stunts gone awry have reportedly occurred in other markets.

“It’s a tragedy; we all feel for the families that lost people at this event,” said venue security consultant Dan Donovan. “There’s a history of these types of events with this particular performer. Your risk profile goes up significantly and we need to factor that into our overall plans.”

A few weeks before this year’s Astroworld event in Houston, another violent incident occurred at NRG Arena, which until now, did not get much national exposure outside of Texas.

On Oct. 23, a concert by rapper Playboi Carti was canceled after ticket holders waited several hours for the show to start, according to a report in the Houston Chronicle. The show’s cancellation led to patrons knocking over metal detectors and causing other destruction at the park. There were also reports of crowd surges.

NRG Park contracts with Contemporary Services Corp. for peer security at the complex.

“We all put together comprehensive plans and strategies to succeed in creating the perfect event. The one thing nobody has mastered is the management of behavior.”

CNN reported about 750 private security personnel and 530 Houston police officers were on site patrolling Astroworld, a significant increase in manpower over previous years.

The troubled history behind Astroworld in Houston prompted the city’s police chief Troy Finner to meet with Travis Scott before the event to express his concerns about public safety, the New York Times reported.

There were reports of serious injuries less than an hour before Scott finished his set, but Finner told the Times that shutting the show down before its conclusion may have led to potential rioting and more dangerous conditions.

Steve Zito, general manager of the Alamodome in San Antonio, saw the Astroworld video widely distributed showing people running through VIP ticket lanes and tearing down temporary fencing before the show with little resistance from security officials seen in the footage.

Without knowing exactly how it all unfolded, Zito wonders if ASM Global and its vendors may have been short-staffed as most venues are coming out of the pandemic. If that’s the case, facility operators must decide whether it’s safe to proceed with the event, he said.

“It certainly makes us go back and look at our policies and procedures and make sure we’re ready for whatever that unexpected thing may be,” Zito said. “Staffing is an issue all the way around. You just don’t know on a week to week basis how many folks are going to show up.”

Zito has worked in the venues business for about 30 years, both in facility operations and crowd management. Apart from two stints at the Alamodome, he ran AT&T Center and FedEx Forum, a pair of NBA arenas.

Zito has never worked a Travis Scott production, but with Andy Frain, he helped run security efforts for Bonnaroo in rural Tennessee, among other festivals, and didn’t encounter the violence that has plagued Astroworld.

Before the pandemic, the Alamodome had a consistent team of part-timers that routinely had the same assignments for working events, Zito said. Now, venues are faced with filling the gaps with new hires in the rush to staff events that may not receive the proper job training.

Talking digital tickets at the gates is one example, Zito said.

There’s a different process for scanning a four-pack of tickets over a single ticket, he said. For those unfamiliar with the technology, a 30-second task could take four minutes to complete. Compound that dynamic with thousands of people coming through the doors and for someone new to the job, potential bottlenecks could occur.

“I can’t say ‘woulda, coulda,” Zito said. “Live Nation is a dear client and I’ve known (NRG Park general manager) Mark Miller forever. But it’s a different time now. You’ve got to look at a lot of other things that we never had to look at previously in moving forward with these gigs.”

Donovan concurs with Zito’s thoughts about staffing shortages factoring into big events. He runs a side business that helps market contactless screening technology and said it was a challenge to staff three music festivals this year where the screening system was used, including the recent Outside Lands event in San Francisco, which reportedly drew 200,000 over three days.

Labor issues aside, dangerous crowd surges have been a concern in public assembly since 11 people were killed rushing through the arena doors for a December 1979 concert by The Who at Riverfront Coliseum, now Heritage Bank Center.

Back then, most arena concerts were general admission layouts, or what was called festival seating. The Who incident changed that concept forever as it pertains to arena events with reserved seats on the floor.

At that time, Ed Rubinstein, now retired, ran the Spectrum in Philadelphia, which had The Who a few days after Cincinnati. The Spectrum sent some people to Ohio to see The Who and they got a firsthand look at the damage.

“They came back and said the crazy thing was that they had all these people on the floor with no barriers at all other than the barricade in front of the stage,” Rubinstein said. “We immediately put in ‘cattle shoots,’ barriers 20 to 40 feet back from the stage. We had guards at each barrier to let people through but only the amount we had predetermined could be in the space in front of them.”

As it relates to the Astroworld festival, Rubinstein said placing 50,000 people on a flat surface in a general admission situation is a potential recipe for disaster if such a large crowd is not broken up into smaller quadrants.

A few overhead screenshots posted on social media show the Astroworld setup was essentially separated into four sections with a T-shaped stage jutting out a bit into the audience to create further separation. The images show what appears to be an exit route running across the center of the event floor.

“Whatever you can do to decompress the front of the crowd is what you need to do,” Rubinstein said. “If you can’t see from the back with a flat surface, obviously you want to move forward if you can. Toward the back, they’re probably not crushing up as much, but in the middle and as you get closer to the front, everybody starts to move.”

In that situation, “the first thing you do is panic,” he said. “You can’t breathe, can’t get out, can’t do anything because there’s nobody nearby other than people trying to crush you.”

Building temporary infrastructure for a large festival is a challenge in itself, not to mention the crowd control piece.

Donovan said it’s more difficult to handle thousands of people in a festival format vs. an NFL stadium concert, where officials have greater control over a GA floor that can hold about 10,000 fans apart from the seating bowl.

“There needs to be a significant amount of additional concert barriers that break up the sections so you can minimize the push,” he said. “Bike racks just don’t hold the crowds back. It’s costly but it’s important from a crowd control perspective. Based on the news reports, this is more about the push than anything else.”

It’s the same principle that applies in science, Libonati said. When you get a push forward, there’s a pull back as a response. Venue operators all recognize the “wave syndrome” that results from that explosive tug of war and “everything in between gets a little crazy,” he said.

In the 1990s, Libonati was part of the facility operations staff running Sam Boyd Stadium in Las Vegas, which had a five-year run playing host to Grateful Dead concerts. As part of the Dead’s emergency plan, spotters working the show were part of the crowd and would wave a red flag in the air if they observed Deadheads in distress.

That signal would be communicated to the local command center with EMTs scattered around the perimeter so they could enter the crowd at the point nearest to the person in need of medical attention, Libonati said.

“I’ve always admired the Dead’s strategy and it’s one that I always believed in and followed at all of the festivals we ran because it keeps everyone in tune with one another,” he said. “Can you teach it to all audiences? I’m not sure.”

Rubinstein hopes the Astroworld festival tragedy teaches everyone another important lesson about crowd control in the entertainment industry.

“It’s a scary situation,” he said. “I hope they learn from it because I thought the industry had learned it after The Who. (In Houston) they were probably right for not stopping the show because they were afraid it would make it worse. Anything can set it off. It just takes a small spark.”