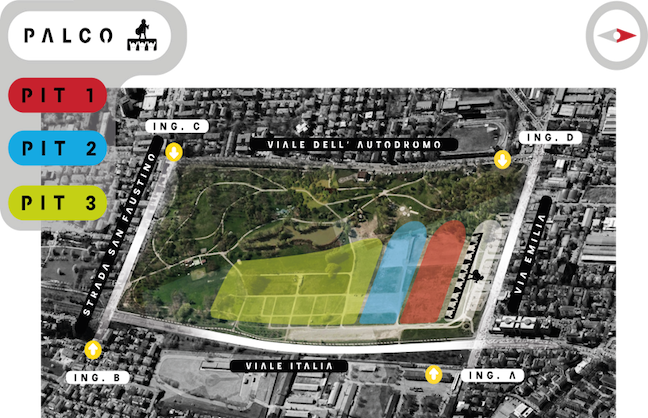 The layout for the biggest ticketed concert ever that will take place July 1 at Italy’s Enzo Ferrari Park, Modena, when Italian superstar Vasco Rossi will perform to 220,000 paying guests.

The concert is being organized by Big Bang promotion agency and sold on the Vivaticket ticketing platform, both belonging to the Bologna group Best Union.

“We are setting a new world record,” said Luca Montebugnoli, chairman of Best Union, “It will be the largest and greatest rock concert ever organized in the history of music.”

Montebugnoli said the discussions started last year with Rossi, and the plans were put in place in January.

“This concert will celebrate Vasco Rossi’s 40-year anniversary from when he sang his first song in Modena,” said Montebugnoli.

Ferarri Park, Modena, Italy, has been under construction for months to set the stage for Viasco Rossi's concert.

The show will be four hours with several supporting acts. Fans are welcome into the venue an hour before the show starts, said Montebugnoli, who expects the ingress process to run quickly and smoothly.

Security will be tight. Rowdy, sometimes violent, football fans (soccer in North America) are nothing new to Europe. “There will be 1,300 local security staff,” said Montebugnoli.

Montebugnoli also pointed out that all tickets are “named tickets” and will use Near Field Communication (NFC) technology. “This means that each ticket has all the information of the customer who purchased the ticket in the system,” explained Montebugnoli.

“At the entrance, we will have hand-held readers that recognize if the ticket is right or not, and if it also matches the name on the ticket and to the credit card that was used to purchase the ticket. Anyone who shows up without all the correct information and credit card is not getting in,” he said. “All the technology runs in both the office control and in the ticketing system. We’re creating a local network into the park and we’re able to track the ticket from any entrance.”

“The administration has been preparing for this event, side by side with Best Union for many months,” said the Mayor of Modena, Gian Carlo Muzzarelli. “As soon as the artist, one of the most loved rock stars in Italy, told us that he would have loved to have a concert here in summer 2017 — this year it’s special for him because it’s 40  years of career, and he started right here in Modena —we began to work, to celebrate him as he deserves.”

“The location, the Parco Ferrari, is quoted in one of his songs, 'Colpa d’Alfredo,' as 'Modena Park,'” said Muzzarelli, “and we chose this as the title of the event. The park is perfect because it’s big, it is near the train station, not more than four to five kilometers from many thousands of parking spots, and it is surrounded by long avenues.”

In a way, Muzzarelli thinks Ferrari Park has been ready for this concert for 40 years. “In 1977, 40 years ago, the same year Vasco Rossi started his adventure as a rock star, Parco Ferrari hosted a huge rally: the secretary of the Italian Communist Party, Enrico Berlinguer, spoke in front of more than 500,000 people. So we can say that the park was ready since the beginning, but now there’s a huge stage, every safety measure, a new fiber optic network and everything else needed to give every possible comfort to the 220,000 people attending the event.”

There will be concessions in the form of food trucks, controlled by Best Union.

Vasco Rossi has been breaking records for a long time. His album, Gli Spari Sopra (“The Shots Above”) released in 1993 went platinum 10 times. In 2007, “Basta Poco” (“A Little Is Enough”), topped the Italian charts for 21 weeks, making it Italy’s best-selling single of 2007.

Fans who did not get a ticket should not despair, Montebugnoli said there are plans to set maxi-screens in the venue, and the concert will be broadcast in over 140 cinemas throughout Italy.

“The community of Modena is part of the event,” said Mayor Muzzarelli. “Twenty-seven thousand out of the 220,000 come from Modena, and we’ll have in two squares of the historical center, Piazza Grande and Piazza Roma; two big screens, and we estimate 15,000-20,000 more will be watching the concert.”

The impact to the city of Modena will be huge, at least for a few days, according to the mayor. “For a couple of days, Friday, June 30 and Saturday, July 1, the city will be impacted in many areas and many streets will be accessible only by bikes, and walking, of course, and we expect many traffic jams.”

“But we’re hosting a show that will be remembered for years and years,” added Muzzarelli, “so we know that the citizens, despite a couple of tough days, will be proud of it, and I want to thank everyone of them for their patience and collaboration.”