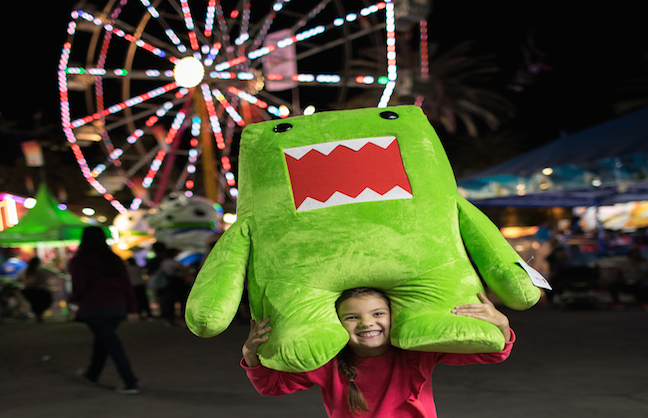 A young Los Angeles County, Pomona, fairgoer, dwarfed by the giant stuffed prize she won on the midway.

In spite of triple-digit heat and high humidity during the first 10 or so days of the Los Angeles County Fair, Pomona, Calif., the event experienced only a 6.5 percent decrease in attendance—1,231,243 compared to last year’s 1,317,370—as the successful concert series helped draw more customers in the evenings and in the latter weeks of the Sept.1-24 fair.

“Once weather wasn’t a factor, our numbers consistently exceded those of last year,” said Miguel Santana, who took over as president and CEO of Fairplex from James Henwood Jr. in January of this year.

“That tells me the community is excited about the fair and wants to attend the fair. We have a lot to offer in terms of different activities and attractions for a full range of people, from children to seniors. But when it’s extremely hot and when most of the fair is outdoors, people are going to stay home.”

Santana also wants to target Millennials to come to the fair. Some of them may think of the fair as a relic from the past. To combat that, this year’s event was one of more than 70 venues across Southern California tapped for an exhibit called “Pacific Standard Time: LA/LA,” showcasing Latino artists. Works by Judithe Hernández and Patssi Valdez were on display at the Fairplex’s Millard Sheets Art Center.

In addition, Santana noted, local restaurants with large social media followings on Facebook, Twitter and Instagram were brought in to offer popular fare on the patio outside the display. “The result was the highest attendance of that gallery since its inception in the 1930s,” Santana said, adding that the food provided fairgoers “a sense of connection to the community.”

Another big factor in the fair’s success was the 16 concerts held in the grandstand, sponsored by Anheuser Busch as part of the End of Summer Concert Series, presented by Toyota. Next year, sponsor Toyota will be replaced by Chevrolet for a three-year deal, said Dale Coleman, vice president of sales and creative programming.

The grandstand has some leeway with how many seats can be installed because the venue was built for horse racing, which was discontinued a few years ago.

“It’s very long so if you are on the end, you are getting out a good long way from the stage,” said Coleman, who added that sometimes demand motivates fair officials to add seats.

Much effort also is made to create a wide-ranging lineup for the diverse group of fairgoers. As an illustration, Coleman noted the final weekend, which featured Ramon Ayala Y Sus Bravos Del Norte, a double bill of War and Tower of Power, the ‘70s band Chicago and the popular hip-hop trio Migos.

“We try very hard to be eclectic and diverse,” Coleman said. “One person’s favorite is another person’s ‘never heard of.’”

The fair took place over a period of more than three weeks, with four weekends, and took Mondays and Tuesdays off. The concerts were held Wednesdays through Sundays for a total of 16 shows. Coleman estimated that a record total of 120,000 attended the concerts for an average of 7,500 per show. All concerts offer a mix of free and ticketed seats, with the free seats being farther away from the stage and the closer ones going up in price from $40 to $150 depending on location. The $150 tickets are for 450 seats down by the stage.

Admission to the fair is free with the purchase of a concert ticket, Coleman said, with some attendees spending several hours at the fair enjoying different facets of it. That’s why when he gives numbers of $2.7 million in talent fees with a gross of $3.25 million, not including production costs, it is not comparing apples to apples. “It’s difficult to determine what the real economic impact is,” he added.

The fair constructs a stage each year. Lodi, Calif.-based L.B. Lights West builds the stage, back of house and provides lighting and equipment. Now that horse racing has been discontinued, the stage can stay up for the entirety of the fair. Before, Coleman said, it was rolled into place before each concert.

Laveen, Ariz.-based Ray Cammack Shows provided 70 rides and 40 games on the midway, said Renee Hernandez, the fair’s communications and public relations manager. The carnival was slightly down from the previous year, she said. Ridership mirrored the attendance pattern and picked up when the days cooled down. Pay-one-price wristbands were available at supermarket partners Von's, Albertson's and Cardenas for $37 or could be purchased on-site for $50, Hernandez said. Fairgoers could use them Wednesdays, Thursdays and Fridays but not on the weekends.

Gate admission remained the same as last year. Regular gate admission was $14 for adults 14 and older and $8 for ages 6 to 12 on weekdays and $20 and $12 on weekends. The discount price at the supermarkets was $12 and $6. Kids 5 and under were free. A year-round budget figure was not available.

“We have a very strong social media presence,” she added. “Our social media person connected with influencers in Southern California and worked on those relationships, which helped with marketing. We have thousands and thousands of followers.”