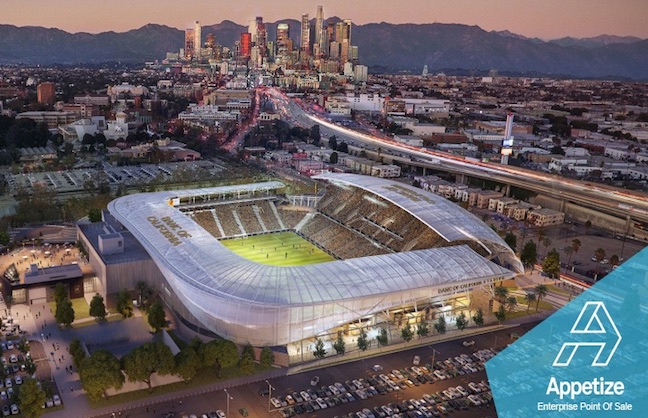 Banc of California Stadium, where Major League Soccer's Los Angeles FC will play, is partnering with Appetize for point-of-sale services.

The new $350 million, 22,000-capacity stadium will join a list of L.A.-area clients for Appetize including the Los Angeles Memorial Coliseum, The Forum, Dodger Stadium, Hollywood Palladium, The Wiltern, Angels Stadium and the Galen Center at the University of Southern California. The company is also based in Los Angeles.

The concessionaire at Banc of California Stadium is Legends.

“This deal dates back into Q4, late 2017,” said Kevin Anderson, co-founder and chief strategy officer for Appetize. “LAFC and Legends were running an RFP for POS and, in beginning of the year, we won the deal.”

The systems will go live on opening day, April 29. “We’re already almost finished with installation of the hardware and software and training,” he said. “Construction is almost finished. It’s all exciting stuff.”

The average term of a contract with Appetize is five years.

The Appetize payment system can enable a faster transaction flow for the concession stands and will also allow guests to order from their phones, said Anderson.

“We will power every concession stand in the stadium,” said Anderson. “We work closely with Legends in other venues already, and work with them in a lot of Live Nation amphitheaters, so this is an extension of that relationship as well.”

There will be over 200 Appetize POS devices in use across the stadium in both club spaces and quick-serve concessions. This includes contactless payments at all transaction points, including Android Pay, Apple Pay and Samsung Pay. LAFC is also deploying Appetize handheld POS terminals for waiters in premium levels.

In addition, the system will provide the platform for future capabilities such as direct payment through a mobile wallet via the LAFC venue app, as well as ordering through Appetize within the LAFC app to designated express pickup areas or in-seat delivery. Appetize inventory management and advanced analytics platforms will also provide real-time data feeds to allow for on-the-fly decision-making.

“We’re honored to partner with our city’s newest team and stadium,” said Anderson. “It’s rare to find people as forward-thinking as those managing the guest experience at Banc of California Stadium, let alone have them be less than 10 miles from our headquarters. We’re excited and looking forward to providing guests with an awesome experience in our hometown.”

LAFC 's vice president of information and technology, Christian Lau, said, “We looked at Appetize, Bypass, NCR Quest and in the end we decided that Appetize was the best fit for our venue.”

“We were pleased with the depth of their service, impressed with their roadmap and mobile-ordering and express pickup integration and their overall POS capabilities,” said Lau.

Legends was consulted on the decision, and LAFC is confident that Appetize and Legends will work hand-in-hand to deliver the best customer experience to guests, he said.

“We want to push technology and innovation to deliver the best experience to our audience when they come to our stadium, combining our mobile first strategy with our technology infrastructure,” he said. “Appetize aligns our strategy and enables our plans for the future.”

All the Appetize POS systems will be in place by April 23 in anticipation of the April 29 opening day.