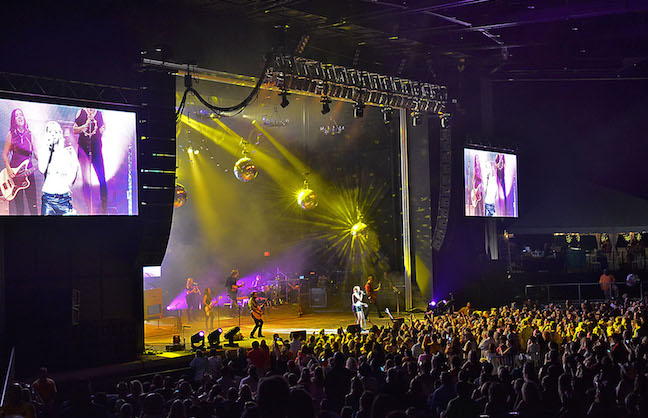 Miranda Lambert opened Lakeview Amphitheater, Syracuse, N.Y., for one show Sept. 3 and then it closed for the winter.

Onondaga County showcased its new $49.5-million, 17,500-capacity Lakeview Amphitheater in Syracuse, N.Y., for one show only before closing down for the winter. “We wanted to put the industry on notice,” said Bill Fisher, deputy county executive, of the initial Miranda Lambert date Sept. 3.

Everyone involved agreed that one date did the job expected. Onondaga County is promoting the Lakeview Point setting of the new shed, right on Onondaga Lake and enclosed by parklands and walking trails. It will get year-round use as a park. The concert season will be similar to other amphitheaters in the Northeast.

Fisher anticipated a full season would run mid-May to midlate September, just like Saratoga and Darien Lake, and involve 20 shows.

The county contracted Live Nation to promote shows there and Jimmy Koplik is out beating the bushes for 2016 bookings. That agreement is for three years with a two-year option.

They hired SMG to manage the venue. SMG has been managing the Oncenter for the county since 2012, including the hockey rink and concert arena and the convention center. The base pay for the latter is about $200,000 a year and the additional for managing Lakeview Amphitheater is significantly less, Fisher said. That agreement is for three years with two three-year renewals.

In a planned food and beverage RFP, the county reserved the right to have the venue manager handle food and beverage, and that may end up being the case. They will issue an RFP in four to five weeks. “It’s a competitive process,” he said.

Kelly Carr, GM at the Oncenter for SMG, used his existing staff to man Lakeview Amphitheater for the opening show. The pavilion seats 5,000 and the lawn capacity is 12,500. There is an event center behind the stage, with a view of the lake, that can accommodate 100 people. That was used for VIPs during the Miranda Lambert show.

Carr recalled the night as an amazing one. He kept hearing people say “I can’t believe this venue is in Syracuse.” The view, he said, is incredible. More boats than anyone had ever seen on the lake, about 100, pulled up to hear the show, Fisher added.

Most of the audience also has a view of the lake, which was filled with boats during the Miranda Lambert opening show.

There are no concessions stands on premises, so SMG brought in portables through its food service division, Savor. They set up close to 70 points of sale and worked with local distributors, Carr said. Kegzilla, a 50-foot tractor-trailer, with 24 types of beer on sale, was a big hit, he added.

It was a massive undertaking for a new amphitheater market. Carr will utilize as many Oncenter employees as possible in operating Lakeview Amphitheater.

The major factors it has in its favor are location, with a phenomenal view and a parklike setting (which Carr compared to iconic amphitheaters like Red Rocks in Denver and the Gorge in George, Wash.) and an extremely well-appointed back of house for the artists. Many of Miranda’s crew and staff were seen running the trails surrounding the amphitheater.

The long-term plan is to do festivals as well as concerts, a fact mentioned by both Carr and Fisher.

Fisher also noted that it is a parking lot away from the New York State Fair. In fact, Lambert performed on a Wednesday night during the fair and the fair, which demolished its grandstand, announced paid shows would be at Lakeview in the future. It will still host free shows on its Chevy Court stage.

The logistics of the deal between the state fair and the county are to be determined, but Fisher said the 2016 New York State Fair will not have paid concerts. Live Nation will continue to promote the concerts. The fair owns and benefits from the parking fees. During fair time, it is assumed people will eat and drink and visit the fair prior to concerts. There will be shuttles to take them to the amphitheater, which means crossing the parking lot both venues use.

The event center is also open for booking, Fisher noted. The county’s budget calls for Lakeview Amphitheater to operate at break-even or better, not including debt service. The venue is being paid for with a $2.5- million annual rebate from the state in lieu of a casino license for the county. That comes from moneys paid to the state by Oneida Nation, which operates Turningstone Casino in a neighboring county.

Motivation for building an amphitheater instead of a golf course, for instance, was the beauty of the location and the fact they wanted to draw a lot of people to the newly-reclaimed lake. Onondaga Lake was quite polluted a few years ago. With federal and state help, the county was able to clean it up, Fisher said. The county owns 90 percent of the shoreline. They wanted to put it to the best possible use for the public and make is a destination for Syracuse.