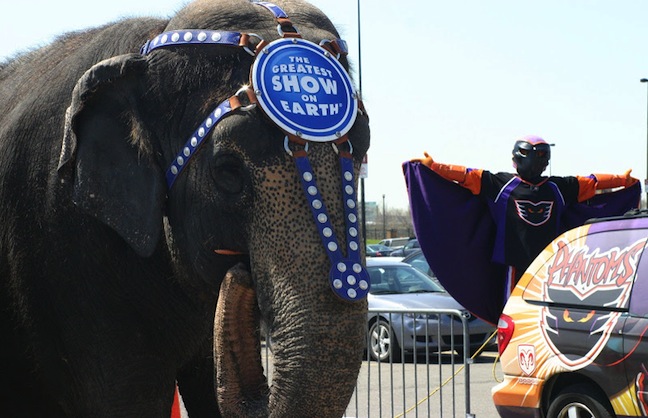 An elephant from Ringling Bros. and Barnum & Bailey Circus.

Paying off a plaintiff has not paid off for one animal rights group.

After a 12-year-old lawsuit, Vienna, Va.-based Feld Entertainment Inc., producer of Ringling Bros. and Barnum & Bailey Circus, recently reached a legal settlement with the American Society for the Prevention of Cruelty to Animals (ASPCA).

Under this settlement, ASPCA has paid Feld Entertainment $9.3 million in connection with two federal court cases that attempted to outlaw the participation of elephants in the circus.

“During the course of the discovery, we found that ASPCA, other organizations and lawyers were paying off a plaintiff for his participation [in this case],” said Stephen Payne, Feld’s vice president of corporate communications. “The court agreed with us that the plaintiff had no credibility, so the claims were dismissed with prejudice. To defend ourselves, we filed this claim.”

The initial lawsuit determined that plaintiff Tom Rider, a former Ringling Bros. employee, was paid more than $190,000 by ASPCA, the Animal Welfare Institute, the Fund for Animals and their lawyers for his testimony. Rider claimed that he was injured by Ringling Bros.’ treatment of the elephants.

Dismissal papers were filed in the U.S. District Court for the District of Columbia as a result of the settlement, which covers Feld Entertainment’s claims against ASPCA for attorneys’ fees and damages in the initial Endangered Species Act case filed in 2000 by animal rights activists and the resultant racketeering (RICO) case brought by Feld Entertainment in 2007.

In a statement, ASPCA said it does not admit to any liability or wrongdoing.

“The Court decided the underlying Endangered Species Act case filed by the ASPCA on the issue of standing and never ruled on the merits of the elephant abuse allegations. In fact, this litigation has stopped being about the elephants a long time ago. After more than a decade of litigating with Feld Entertainment, the ASPCA concluded that it is in the best interests of the organization to resolve this expensive, protracted litigation. We are glad to put this matter behind us so we can focus most effectively on our lifesaving work, preventing cruelty and improving the welfare of animals,” said ASPCA president and CEO Ed Sayres.

The original complaint filed in July 2000 by ASPCA, the Animal Welfare Institute, the Fund for Animals and Rider, was dismissed in 2001 and reinstated in 2003. The Animal Protection Institute joined the case in 2006. The six-week trial began in February 2009 and, the following December, the U.S. District Court ruled in Feld Entertainment’s favor. The ruling stated that Rider was a paid plaintiff and, as a result, not a credible witness.

Based upon this ruling, Feld Entertainment brought suit against the animal rights activists involved in the case, along with their lawyers, alleging violations of the RICO statute and Virginia Conspiracy Act, malicious prosecution, and abuse of process.

“These groups abused the judicial process in a way that was designed to injure our company and take away the elephants,” Payne said. “We didn’t ask for this litigation; it was thrust upon us. We are pleased ASPCA decided to drop its case and would like to thank the venue managers and staff who have supported us over the years.”

After PETA filed two complaints with the U.S. Department of Agriculture claiming that the circus was possibly jeopardizing the safety and psychological well-being of two elephants, Cole Brothers was ordered to pay PETA $15,000.

PETA claimed that the elephants, Tina and Jewel, were hundreds of pounds underweight and had protruding spines due to the deprivation of adequate veterinary care. The USDA confiscated Jewel and removed Tina in 2009.

“PETA is positioning this as the circus versus PETA, and it wasn’t like that,” said Renee Storey, vice president of administration for the Cole Brothers Circus. “PETA routinely files complaints with the USDA on everyone who works with animals in the entertainment, recreation and sports industries. We chose to settle the matter to avoid the cost of litigation at our lawyer’s recommendation.”

In another recent development, Los Angeles is contemplating banning circus elephants altogether. Late last month, the Los Angeles Personnel and Animal Welfare Committee recommended that the City Council vote to ban circus elephants and/or the bullhooks and other tools that trainers use to control the animals, according to a New York Times report.

The ban would block the Ringling Bros. and Barnum & Bailey Circus from bringing its elephants into the city limits.

“The proposed circus-elephant ban in Los Angeles is a foolish proposal and not in the best interest of the public,” Storey said. “Charges are being made that are meritless and not factual. Elephants are licensed, regulated and monitored by the USDA. The financial loss to Los Angeles from the absence of circuses would be great.”

Payne, who recently debated city council member Paul Koretz, sponsor of the bill, on a local radio show in the city, said the bill has not yet come up for vote. Koretz was unavailable for comment on the pending bill.

“We don’t know when voting on this issue will take place, but we are diligently working to educate other city council members on our animal care practices and the economic impact this would have on the city,” Payne said.