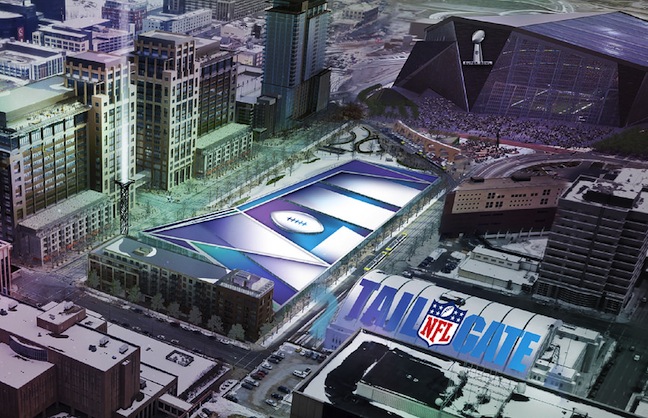 Even the bid committee was surprised when the National Football League announced May 20 that it awarded Super Bowl LII to Minnesota, which will take place February 2018.

“I think there was a lot of surprise out there that New Orleans wasn’t chosen,” said Minnesota Sports Facilities Authority Chairwoman Michele Kelm-Helgen. New Orleans has won its 10 previous bids for the game. Minneapolis was also going up against Indianapolis. Minnesota last hosted the Super Bowl in 1992.

Kelm-Helgen, who was also a member of the Minnesota Super Bowl Bid Committee, said that there were a few main factors that stood out to the NFL owners, who vote on the site. Minneapolis’ new, nearly $1-billion multipurpose stadium certainly played a part.

“It’s clear that our stadium, as it’s being designed and built, is going to be unlike any other stadium in the country,” said Kelm-Helgen. “I think the NFL is anxious to showcase the stadium, and the owners are really interested in coming to see the new facility.”

A rendering of the New Minnesota Multipurpose Stadium, which will open in 2016. (Photo by Meet Minneapolis)

The New Minnesota Multipurpose Stadium (also called New Vikings Stadium) broke ground in December 2013 and is set to open July 2016. The Vikings are currently playing at TCF Bank Stadium at the University of Minnesota for the 2014 and 2015 NFL seasons.

“There’s a revenue-sharing formula in the NFL, and if there’s an underperforming market, that drags down the revenue for the rest of the league, so the NFL was clearly interested in seeing our stadium project come to fruition,” said Melvin Tennant, CEO of Meet Minneapolis, the city’s convention and visitors bureau.

Of the $975-million total cost for the facility, with 49 percent (or $477 million) paid by the Vikings and private funds.

“It certainly is important to the Vikings organization,” said Vikings VP of Public Affairs and Stadium Development Lester Bagley. “We love the community and made the case for many years that getting the stadium deal done would produce major events.”

“Now, right out of the box, two years before the stadium even opens, it’s secured the world’s biggest sporting event,” he added.

The remaining $498 million for the stadium is covered by public contribution. The City of Minneapolis put up $150 million, with the State of Minnesota covering $348 million.

“It’s pretty clear the owners really appreciated the public commitment to the stadium and the fact that the state and local city government were willing to put in a sizeable investment,” said Kelm-Helgen. “I think the owners wanted to acknowledge that and come to the city.”

The bid centered around the theme ‘Built for the Bold.’

The business community also made it clear that they were ready and willing to embrace the Super Bowl, with several major business leaders serving as bid committee co-chairs, including CEO of US Bank Richard Davis, CEO of Ecolab Doug Baker and former Chair and CEO of Carlson Companies Marilyn Carlson Nelson.  Minnesota is home to 19 Fortune 500 companies as well as 10 large, privately-held companies.

Over the course of seven days, the business community raised more than $30 million in funding commitments to help cover the cost of hosting a Super Bowl. Before the main bid presentation, the funding was already in place.

Tennant said that with that cost comes a major payoff. Based on the economic impact report from the Super Bowl in Indianapolis in 2012, he estimates that the financial benefit to Minneapolis will be in excess of $300 million.

February isn’t the biggest time for tourism in Minnesota due to severe weather, with temperatures averaging a high of 29 degrees Fahrenheit and a low of 13 degrees.

“We’re going to have more than 100,000 people coming to Minnesota in February 2018, which isn’t exactly our prime tourist season,” said Bagley. “It’s really going to have an economic impact, as well as the branding upside that the Super Bowl brings to the community.”

Renderings of the proposed plans for Super Bowl Boulevard. (Photo by Meet Minneapolis)

Kelm-Helgen believes the success of New York’s 2014 Super Bowl played a role the NFL’s decision to award the game to Minneapolis, as well as the city’s winter capabilities and indoor options with eight miles of skyways connecting major landmarks.

The new stadium will also have a roof, so the field and spectator temperature can be regulated.

“One of the things we do know how to do in Minneapolis is manage any kind of snow or winter weather, which in some ways makes us more equipped than cities that only get periodic snow,” she said.

The bid committee presented several options for the various events that the NFL needs to surround the Super Bowl, whether it’s the NFL Honors events, the tailgate parties, or Super Bowl Boulevard.

“I think we’re going to make it fun and really embrace the winter, but we’ve also been very clear that those who don’t want to be outside don’t have to; they can walk through the skyways and ride the light rails,” added Kelm-Helgen.

Current plans for NFL Boulevard include activities covering more than a mile in downtown Minneapolis. The proposal includes a skating rink, snowboarding half-pipe, curling, broomball, and a snowmobile track, as well as horse-drawn sleds and interspersed heating lamps, hot beverages, and warming houses with fire pits. There are also plans for an eight-story ice palace.