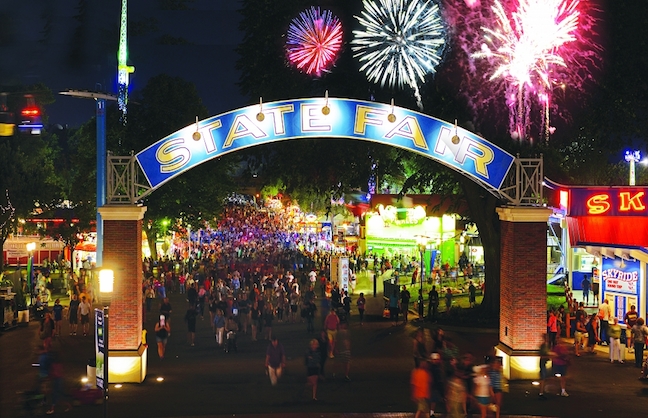 Breaking their record attendance from 2014, the 2016 Minnesota State Fair in Saint Paul saw 1,943,719 fairgoers over their Aug. 25 – Sept. 9 run, up 9% from 2015. “It was a great testament to the loyalty of Minnesotans to their state fair, as well as a demonstration of their need to get together,” said Brianna Schuette, marketing and communications manager for the Minnesota State Fair.

Schuette added that the Minnesota State Fair differs from most fairs that adopt an annual theme, choosing instead to remain with the unofficial title adopted in the 1970’s. “When most Minnesotans talk about the annual fair, they’ll refer to it as ‘The Great Minnesota Get-Together.’ It’s become synonymous with the fair.”

Pointing to recent media coverage of divisive domestic issues, Schuette said the fair’s status as “The Great Minnesota Get-Together” is just what people needed this year. “They felt a need to come together. The fair is something that unites us all, and is common to all of us. We see people make their way from western Wisconsin, the Dakotas, and northern Iowa. Coming to the fair has become a sort of rite of passage for Minnesotans.”

A “Unite in Purple” event opened the first Friday of the fair to honor the April passing of Prince, a native Minnesotan. “We don’t have a lot of celebrities in Minnesota, so Prince was someone we all held dear,” Schuette commented. “So we wanted to find a way to bring the community together for one night to honor him.” Along with painting the fair purple, purple lighting illuminated the 4-H building and grandstand. Purple buttons and glow bracelets were handed out to fairgoers at the entrance, special fireworks and laser shows were displayed, and Prince’s tour DJ played for an onsite dance party.

“We invited the vendors to join in, and we saw them respond with purple malts and purple cheese curds,” Schuette said, adding that about one in three guests wore purple shirts that day. “The success of that event in coming together and demonstrating unity really set the tone for the rest of the fair.”

New additions to the fair this year included a 6,540 square-foot restroom, supplementing the existing 14 family-friendly restrooms in the Kidway carnival area. “Our Kidway is quite a walk away from our other restrooms, so it was important for us to make family friendly restrooms available to our fairgoers,” said Schuette. “We had been wanting to rebuild the old run-down restroom for some time; it was a long overdue capital improvement. As a quasi-state agency, we don’t receive any government money, so we were excited to be able to complete the new restroom.”

“Even though we’re fortunate to have hundreds and hundreds of trees on our property, we still struggle with having enough shade for guests,” said Schuette. “Any opportunity we have to provide a shaded area and entertain fairgoers is always a win-win.”

Admission cost $13 for adults, $11 for seniors and children aged 5-12, and free for those under 5. The Mighty Midway and Kidway offered ride tickets for $1, sheets of 30 for $25, and sheets of 54 for $40. Revenue and sponsorship numbers are not available before an audit, according to Schuette. The 2017 Minnesota State Fair will run Aug. 24 – Sept. 4.