Movie Night at the Ballpark 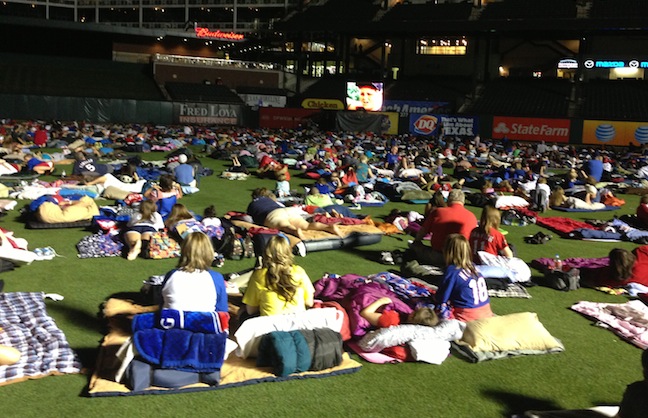 Fans get comfortable on the outfield at Rangers Ballpark in Arlington, Texas. (Photo by Fox Sports Southwest)

Families huddled in sleeping bags, looking up at the stars and making memories. But this wasn’t an ordinary camping trip. This family event took place in the outfield.

Texas Rangers Enterprises partnered with Fox Sports Southwest to put on a family-friendly sleepover event at the Rangers Ballpark in Arlington, Texas. The ballpark hosts many nonbaseball events to bring in additional revenue and, although this wasn’t the first sleepover, there was something that made it particularly special.

A new generation of baseball fans experienced “The Sandlot” at the ballpark.

The Major League Baseball stadium sold 2,000 tickets to the May 11 event. Fans sat in the stands where they watched an away game on two rented GoVision screens. Later, attendees could meet “The Sandlot” director David Evans and star Patrick Renna before setting up sleeping bags in the outfield and watching the film on the GoVision screens.

One of the Rangers’ national broadcast affiliates, Fox Sports Southwest, helped bring the movie to the stadium.

“We’re part of the Fox conglomerate that includes 20th Century Fox, and ‘The Sandlot’ is distributed by their Home Entertainment group,” explained Mary Hyink, director of Marketing & Communications at Fox Sports Net. To celebrate the film’s 20th anniversary, the company has rereleased the movie on blu-ray and DVD combo pack and some of the stars have made guest appearances around the country.

“This movie is so great and has timeless and positive messages that really resonated with fans then and today,” she added. “Plus, it was such a unique way to let families come into the ballpark.”

Sean Decker, director of Sales & Operations for Texas Rangers Enterprises, had been a fan of the film as a kid, wearing out his VHS tape watching Smalls, Ham, Squints and the rest of the gang on their baseball adventure.

“I grew up with the movie, so it almost didn’t occur to me that a lot of these kids wouldn’t have necessarily seen it because they weren’t around when it came out,” Decker said. “It was cool to be able to see parents share with their children what, in a lot of cases, was a movie from their own childhood.”

Fox Sports Southwest served as the driving force of the promotional effort, and their support combined with promotion on ESPN radio and in-game announcements at Rangers games helped the event sell out in 10 days. Tickets for children 13 and under were priced at $20, with adults paying $30 for entry. Decker said that the ratio of kids to adults was about one-to-one, which would lead to a gross of about $50,000.

“We try to keep it as affordably-priced as we can because our goal is to make sure that a family of four can do it together,” said Decker. “The challenge for us is the operational costs. Any time you involve kids, it’s my belief and the Rangers' belief that we want plenty of security guards and staffing, which obviously involves a cost.”

Attendance was capped because the outfield can only hold 2,000 sleeping fans. There are a number of ways Texas Rangers Enterprises protects the field during sleepover events, including fencing off the infield, keeping outfield grass longer than usual, using preventative products before the event, and aerating the field afterward.

“We try to limit guests to taking only a sleeping bag, a pillow and a bottle of water onto the field,” said Decker. “Of course, each year it seems like some things we don’t want there sneak by us, but we’re very cognizant to try and keep sodas and things that could kill the grass off of the field.”

Though alcohol wasn’t served, concession stands were open during the event. Fans followed baseball rules about what types of food they could bring in — soft-sided coolers, no glass or aluminum — and some guests went so far as to bring in pizzas to eat in the stands.

“David Mickey Evans and Patrick Renna were really terrific with the kids, signed autographs and passed out merchandise,” said Hyink. “We also had a make-your-own Sandlot baseball card photo booth.”

Decker said that he was surprised that there were people in the audience who had never been to the stadium. The target market for the event was Rangers supporters, and many of the guests bought tickets for the event because of their affinity for the team.

“The feedback is that this was a bucket-list item for a lot of our fans. If you’re a big David Murphy fan, you get to sleep right where he stands in the outfield every day,” said Decker. “It was great to have new faces at the ballpark, too. We love having Rangers fans back, but we also love the opportunity to try to create more Rangers fans.”