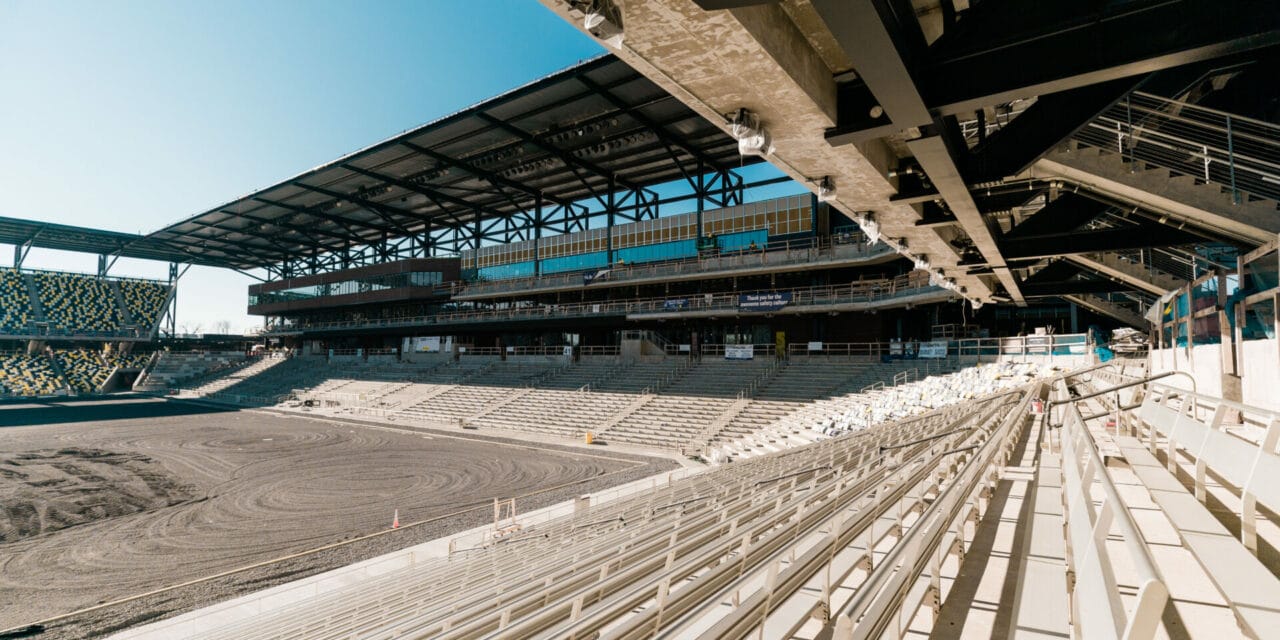 Most suites and club seats at Nashville SC’s new Major League Soccer stadium are situated on the west side of the facility, seen here in a recent construction photo. (Courtesy team)

Nashville SC’s new 30,000-seat stadium stands as the biggest soccer-specific venue in the U.S. and Canada and with good reason. The Major League Soccer team is poised to surpass 20,000 season tickets sold with most premium inventory under contract, said sales consultant Chris Gallagher.

The $335 million stadium, designed by Populous and built by Mortenson with CAA Icon serving as owner’s representative, is scheduled to open May 1, a few weeks ahead of schedule.

That date works fine for Gallagher and the sales team. Three months out, Nashville SC has sold most of the 4,000 premium seats distributed among 27 suites, 18 loge boxes and multiple club seat products, Gallagher said.

The premium inventory as a whole ranks among the highest for a soccer-specific venue, although the number of suites falls in line with most of the league’s stadiums. (TQL Stadium, home of FC Cincinnati, has 53 suites.)

“We’re down to the short strokes; we have less than 100 premium seating memberships available now,” Gallagher said. “We’ll be sold out before the building opens. Now, we have to deliver the experience. We’re ready to put our stamp on what we feel it should be.”

To date, Nashville SC has sold over 18,000 season tickets for the new stadium, a number Gallagher expects to eclipse 20,000 over the next three months, which would also rank among the highest totals in Major League Soccer. 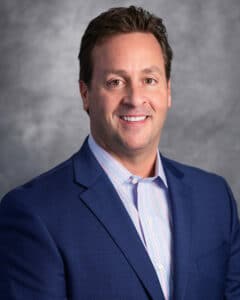 Elevate Sports Ventures has served as the team’s sales agency since January 2021.

Gallagher has worked with Nashville SC since December 2019. He has agreements with both the team and Elevate.

All told, Gallagher has 20 years of big league sales experience, including about nine years in MLS. Before landing in Nashville, he led the premium sales campaign for Orlando City SC, which opened Exploria Stadium in 2017. It has 25,500 seats, among the bigger MLS venues.

A few months after Nashville SC’s sales program launched in late 2019, the world changed forever. It all started with a devastating tornado that blew through Nashville on March 2, 2020, killing 25 people and causing $100 million in damage.

Then came the pandemic and the lengthy shutdown of sports and entertainment, including Nashville SC’s operation.

“It’s incredible to see the market back the club during a really challenging time,” Gallagher said. “Who writes the textbook on ‘let’s start a team and open a new stadium with all this craziness going on?’”

Most premium seats are situated on the stadium’s west side. There are pockets of club seats in the corners. The cost to buy food and drink is folded into the price of most suites and club seats.

The average price for suites is $130,000 annually, tied to terms running three to 10 years, Gallagher said. All suites have 18 seats with the exception of the 36-person hospitality suite served for single-match sales.

The loge boxes, positioned at center pitch in the lower level on the west side, sell for up to $60,000 a season. They’re designed in groups of four and eight seats and have been sold out for quite a while, Gallagher said.

Much like loge boxes across sports, the mid-priced hybrid model hit the sweet spot in Nashville, although the sales process took on a steady pace, which proved to the team’s marketing staff that the price was right for those products.

It all started with  suites and club seats. After the team got to 90% sold, they moved on to the next wave of products.

“We didn’t want to be one of those clubs that sell all their suites in two weeks and then brag about it,” Gallager said.

“I learned that a long time ago working for Wayne Huizenga (former owner of three south Florida pro teams),” he said. “That’s the last thing you ever wanted to go to him with; all he would tell you is we didn’t price it right and left money on the table.”

The Premier Club, the highest-end club space, the WeHo Club, named for the Wedgewood-Houston neighborhood where the stadium sits, and the Goalpost Club, tied to a supercharged sports bar theme, are all sold out.

Front row seats connected to the Premier Club cost about $600 a person per match, Gallagher said. Ticket prices for the WeHo Club and Goalpost Club average $175 a person. 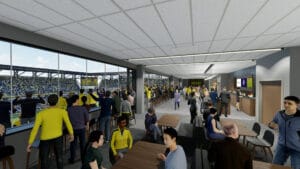 The Captain’s Club, shown here in a rendering, sold reserved tables for four inside the lounge as part of a premium seat package. (Courtesy team)

The Captain’s Club offers a twist on premium.

The vast indoor space stretches from midfield to the goal on the north side. Inside the lounge, there are 16 four-top tables that sell for $28,000 a season, a price that extends to four outdoor seats in the bowl.

“Once the doors open, that’s your table and the decision to sit there is your call,” Gallagher said. “Nobody else will (sit) there. If your group wants to hang out at halftime, they know they have a space to go to, which is different.”

On their own, individual seats with access to the Captain’s Club sell for about $200 per match, Gallagher said.

The studio terrace and the Transcard Terrace, branded for the payment technology solutions firm, are stacked in the northwest corner. The Corner Kicks are in the southeast and southwest corners of the lower bowl.

For those four premium spaces, each seating for a few hundred fans, the tickets cost about $100 a match.

One interesting aspect is that Nashville SC’s stadium is among the few MLS buildings designed without tunnel club connected to field-level seating.

Those two features have been a trend across the league’s newer venues. Teams market those exclusive experiences, some with cushy seats flanking team benches. They’re often tied to indoor lounges underneath the stands next to the home team locker room, providing views to players walking to and from the pitch.

In Nashville, there are field-level seats with access to premium lounges higher in the bowl, team officials said.

Regardless of the layout, Nashville SC executives feel they have designed something for everyone, Gallagher said.

“Only about 13% of the season ticket base at Nissan Stadium converted to premium at the new stadium,” he said. “You’re talking about finding a lot of new customers out there. It goes back to enthusiasm for the club. There’s a lot of good things going on here; it’s a vibrant city.”